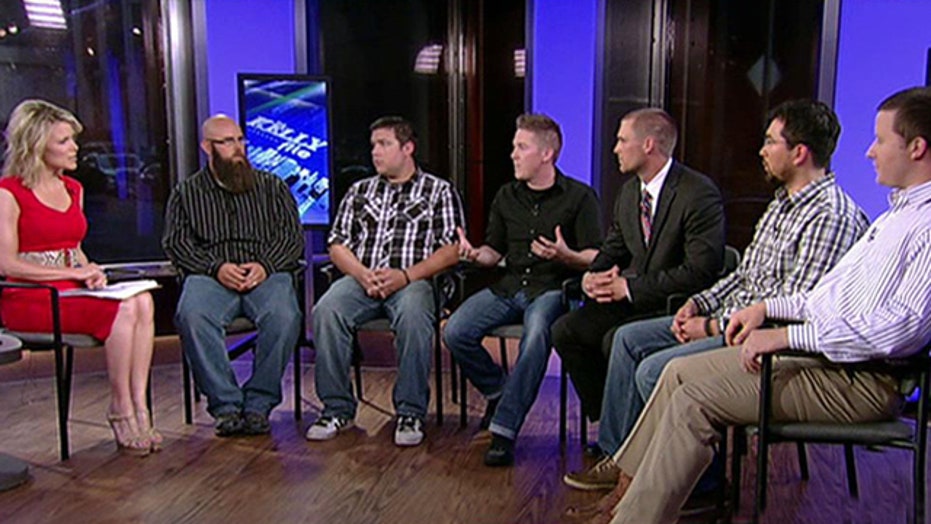 This is a rush transcript from "The Kelly File," June 5, 2014. This copy may not be in its final form and may be updated.

MEGYN KELLY, HOST: This news on Sergeant Bergdahl's time in captivity just broke hours ago right before I sat down to speak with the men who served with Sergeant Bowe Bergdahl in a 30-men platoon on a tiny outpost in the far reaches of Eastern Afghanistan. In a world exclusive, this is the first time these men have been together since they left Afghanistan.

KELLY: We are joined now by six members of Bowe Bergdahl's platoon. Guys, thank you all so much for being here. I want to start with you, Evan Buetow. Because you were the former sergeant, you were the team leader of the team that Bergdahl was on, what do you make of this latest reporting by James Rosen that he had converted to Islam, that he fractionize openly with his captors and declared himself a warrior for Islam at least by August of 2012?

KELLY: But trying to find somebody who speaks English and can connect them with the Taliban could mean, you know, he had some God complex, he wanted to, you know, solve the war. It doesn't just mean that he's getting ready to go collaborate with the enemy against the United States.

BUETOW: Exactly. And at this point, we're still going to have to listen to his side of the story at some point. I think right now, America wants to hear what he has to say.

BUETOW: So, once he got with the Taliban and got connected with them, at that point, what happened after that we don't know, and we're going to have to wait for his answers. Now, the -- what is coming out now about him converting to Islam and those things, we all heard those reports, too. I mean, we're all still in the Army and everything.

KELLY: When you think of him in captivity for five years and see that video of him coming home, you know, with the Taliban releasing it, it's a propaganda piece but nonetheless, it shows him. I mean, do you think this is what I would have done, too, what I had to do to survive even if it involved saying I converted to Islam and took up arms against the United States. What do you guys think when you see that?

CODY FULL, BERGDAHL'S FORMER ROOMMATE DURING TRAINING: Maybe five days. I would have done everything I had to do, cursing them, trying to escape, swinging on them, trying to steal a gun. Shoot them. I'm not going to be a propaganda piece so my family can see me on the internet.

KELLY: You're Cody Full, former specialist and you were his roommate prior to deployment.

FULL: Yes. Another thing I keep hearing is, you know, what were his motives for deserting? It doesn't matter what his motives were. We took an oath and we all had to abide by, you know, orders, you know. And you don't just leave your fellow Americans to join somebody else.

KELLY: But explain that to us. Because civilians who have never, as you guys did, volunteered our service and lives potentially to protect America, think well, he was disillusioned. You know, he was scared. He walked off. Help us understand what a --

JUSTIN GERLEVE, BERGDAHL'S FORMER SQUAD LEADER: We all signed up by ourselves. We volunteered. A draft didn't come through, nothing like that. So, for him to sign an oath and like what Cody said, he signed an oath to do his job.

KELLY: But some people say he gets over there, and it's a different story. He claimed, an e-mail home to his dad according to Rolling Stone right before he deserted or left or whatever, that he saw atrocities, he was very disillusioned with the Army. I mean, I'm putting it nicely what he said in that e-mail.

BUETOW: Just to say, to add more to what they are saying, yes, we did sign on that line and we all saw, I mean, not atrocities in like, you know, some illegal thing that was going on that was trying to get covered up or anything, but you see your friends die. No one -- unless you're there, you don't know what we've seen.

KELLY: I can feel how strongly you feel about that. But to take it to collaboration, possible collaboration with the enemy, which is clearly something our James Rosen reported earlier this week that they have a CIA file on and there are many in the Intel community who still believe that's a possibility and they're investigating. And now the latest reporting about, you know, shooting ak-47s with the Taliban doing target practice with the Taliban, clearly, their relationship had developed. It seems hard to believe that an American soldier would do that unless he had gone mad or if he was trying to save his life.

JOSH CORNELISON, FORMER MEDIC IN SERGEANT BERGDAHL'S PLATOON: He doesn't seem like a captive. He seems like someone who is potentially enjoying himself by --

KELLY: Wouldn't you do it, too? He tried to escape. They got back him back. They put him in a cage for five days. Wouldn't you then do what you had to do to save your life?

CORNELISON: You do everything you can to get back to your guys. Because, you know that they care about you. You care about them. You would put your life down for them and they're going to do the same thing for you.

KELLY: So, what's the best evidence you have that the night he went missing and ultimately wound up captured, he was doing it intentionally.

BUETOW: OK. The morning that we found out he was missing, someone went to wake him up for his guard shift and he was not there. He was not in his tent. His weapon, his bulletproof vest, his sensitive items were left behind in the tent. We looked around the small op we were on, it was the size of maybe two acres. Some wire, some areas where anyone could just walk right up. It wasn't like a structured base with walls and a gate. We had truck stand out, we had a couple of bunkers. That was it.

It only took a few minutes to look around and see that he was not there. And at that point we knew nothing. We knew he was gone and we had nothing else to go on. So, we pushed the patrol out right away to go to the neighboring village just right there to see if we could find somebody who could give us some information, a direction of travel, if they saw anything. I mean, we got out about 10 feet out of where we walked out and two boys who were walking to school came up to us and said, hey, there was an American crawling through the weeds that way and they pointed --

CORNELISON: -- in that direction and that's the lead we followed because that was the only that we had.

UNIDENTIFIED MAN: I was on the patrol, too.

CORNELISON: I was, too.

BUETOW: They said he has no weapon with him and he has no gear. If you know infantry men, when we go on patrol we are slammed with gear. So they said that it was weird, he was by himself. You guys are never by yourself.

UNIDENTIFIED MAN: You never go anywhere without your weapon.

BUETOW: You never go anywhere by yourself.

KELLY: And he had a conversation, where you Evan is the leader about what would happen to him if he took sensitive information, if he just happened to wonder off --

BUETOW: Well, he said, what would happen if my sensitive items went missing, which is a rhetorical question for any soldier to ask. No one doesn't know the answer to that question.

KELLY: You will get in a whole lot of trouble.

BUETOW: Everything shuts down. If a weapon goes missing, everything is going to shut down.

VERKANT: He said that to me, probably a week or two prior, we're on a different mission, we got stuck on top of a mountain for a about week or so. And just, you know, sitting around waiting to do our guard shifts or whatever, talking to me, just you know, making jokes or whatever and he says, "You know, I could just, you know, see myself getting lost in these mountains." Well, I couldn't see myself, you know, here but maybe like in Colorado or Alaska. I don't want to be stuck in the mountains in this country, personally.

KELLY: Did he say anything to any of you guys about "I'm disillusioned with the war effort, I hate the Army."

BUETOW: He never said to me that he hated the Army. He came to me at one point and said that he was concerned and frustrated with America -- the Army's -- our approach to the war in what we were doing. He said he was frustrated with that.

GERLEVE: He was disappointed in the way -- he thought us going to war would be -- we were going to go to war, it was gun battles every day. The war today is not that way. You know, as Cody stated, it's all, you know, we're trying to hearts and minds the right way to go and he was very, I mean, it was discouraging to him.

FULL: Yes, when the Rolling Stone article came out, we were all kind of like, what? Because the e-mail --

KELLY: Because it had these devastating quotes that he hated the Army.

FULL: The e-mails to his father were completely different than what he was saying to people in the platoon about what he felt about the war.

KELLY: He wasn't talking about the horror of being an American --

FULL: No, no, no, he was wanting to do more aggressive stuff and he was frustrated that we weren't allowed to do it.

KELLY: Do you believe -- because I know you have some anecdotal evidence that you feel, a couple of you feel the attacks got worse on your unit after he disappeared and so on --

BUETOW: Everyone would agree that that's clear.

KELLY: That the attacks got worse.

VERKANT: It's way too hard to say, there is too many different things I can go with that. Whether there is new people that came to the area, you know, a new bomb makers that came in, or if he shared information. I mean, that's so speculative.