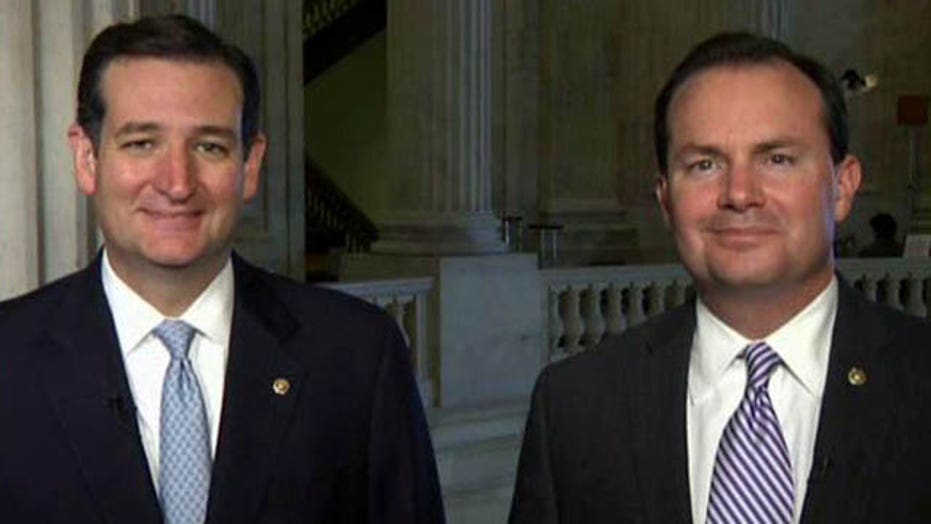 How will deal impact the American people?

This is a rush transcript from "Hannity," October 4, 2013. This copy may not be in its final form and may be updated.

SEAN HANNITY, HOST: Joining us now live from our nation's capital with exclusive reaction are two men most talked-about -- they're the most talked-about guys in D.C. at the moment, Senators Ted Cruz and Mike Lee. Gentlemen, welcome to the program. Thanks for being with us.

SEN. TED CRUZ, R-TEXAS: Great to be with you, Sean.

HANNITY: All right, so the bottom line is, assuming the House votes the way we think they're going to vote -- we'll know within the next 10 minutes -- premiums for people will skyrocket. We know that jobs are going to be lost. Part-time status for people that want to work more hours -- that's going to be gone. And we got this train wreck of a rollout.

CRUZ: Well, this is a lousy deal for the American people. This is, sadly, a classic instance of the Washington establishment selling the American people down the river. This deal does nothing for the millions of people who are hurting because of ObamaCare.

It is an unfortunate instance of the Washington establishment once again not listening to the American people.

HANNITY: Senator, you know, I know you were on Mark Levin's show earlier. You used the term -- really, the people that sabotaged this were your fellow Republicans, John McCain, Bob Corker and others. What is your reaction to them tonight?

CRUZ: Well, it was unfortunate how this played out. I mean, the last two months -- and it's worth, for everyone watching this, to have a word of encouragement. What we've seen over the last two months has been incredible. We saw millions of Americans come together. Over two million Americans signed a national petition at Dontfundit.com, light up the phones here at the Capitol.

We saw the House of Representatives stand strong, listen to the people and stand strong against ObamaCare. And sadly, as you just noted, what we then saw was Senate Republicans not unite but be divided.

HANNITY: Do you agree with that, Senator Lee?

LEE: Yes, it's a missed opportunity. I think if we had stayed united as a party, if we had stood behind the House Republican conference, which fought quite nobly in order to keep vital aspects of the government funded, in order to keep veterans' programs funded and to keep our national parks open, I think we could have made more progress. So it was an important missed opportunity.

But again, we've got to emphasize the fact that this is really just the end of the beginning. This is a fight that's going to continue. You know, when a publication like The Chicago Tribune, the president's hometown newspaper, has come out and said that, like us, they believe that we should have a one-year time-out on ObamaCare -- this law's not ready to be implemented -- you know something's wrong.

And we're going to continue to see more data points like these, telling us, telling the administration that the American people are not ready for this law because this law is harming people.

HANNITY: So is it a fair assessment from both of you that the real -- if there's any winners and losers, the real losers are the American people tonight, because nothing in this ObamaCare law is as it was sold to them, promised to them? There's no savings. It's more expensive. Doctor choices are going to be limited. Jobs are being lost.

Is there a loser here, the American people?

LEE: Yes, in overwhelming numbers. And it's tragic. You know, it's tragic whenever you hear about any of these stories. It's especially tragic to those people who have actually lost jobs, who are seeing their health care premiums skyrocket, or people who have had their wages cut or their hours slashed. And we're going to see more and more of these come out in the coming months as we get closer and closer to this January 1st full implementation date.

And this is a tragedy that we tried to avoid, a tragedy that I still hope we can find a way to avoid. But unfortunately, today's decision will make that more likely, that more people will suffer as a result of this law.