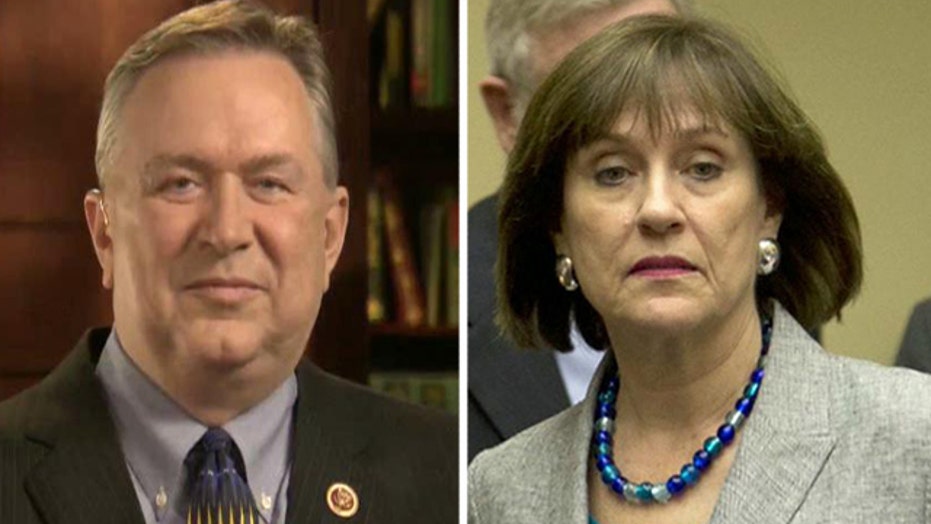 This is a rush transcript from "The Kelly File," July 11, 2014. This copy may not be in its final form and may be updated.

REP. JIM JORDAN, R-OHIO: What I want to know is why did it take us this long to get these e-mails? We've been after these for six months. And you dump them on us July 3rd.

The FBI has not talk to you about the lost e-mails of Lois Lerner?

JOHN KOSKINEN, IRS COMMISSIONER: They have not.

JORDAN: Is anyone from the Justice Department talked with you or anyone at the Internal Revenue Service about Lois Lerner's lost e-mails?

MEGYN KELLY, HOST: Well, Lois Lerner is the women at the center of the IRS targeting scandal. She was again the focus of a heated hearing this week. And not long after that, one congressman decided he had about enough of this. Congressman Steve Stockman is now calling on Congress to arrest Ms. Lerner. He's arguing that the Obama administration will not prosecute her, so it's up to Congress to act.

Texas Congressman Steve Stockman joins us now. He filed his resolution to arrest Lois Lerner just yesterday. Congressman, good to see you. So, you want the Sergeant at Arms of the U.S. Congress to go knock on her door, pick her up, and throw her in, I guess, a D.C. jail?

REP. STEVE STOCKMAN, R-TEXAS: Yeah. This is just the same as if you had a contempt citation in a court of law where you don't obey and the judge can order you arrested. Congress looks inept when we don't carry trough. We issued the contempt order against her, and we need to act upon it. And it's a privileged motion. This is something even John Boehner, if our understanding is correct, he can't even stop.

KELLY: How would this happen? I mean, would you have to just get votes from a majority in the House for this to happen? Or how would it happen?

STOCKMAN: Yeah, it would be a simple majority in the House because it is a house issue of contempt, and the Senate and the president can't veto it or interfere, and under the orders of the House, she would be arrested and brought to a jail.

She has to respond. What she's doing, this is -- the history of her actually goes away back to when she works at FEC, Federal Election Commission, and some argued that she was persecuting conservatives there too. This is a long history of what appears to be belligerent and, quite frankly, she feels she's above the law.

KELLY: Your critics say if you do this, if you succeed in doing this, this will be Republicans pushing it too far, that you should let the process play out, Holder's allegedly got an investigation underway, Eric Holder, and they say if you do this, your gonna create empathy for Lois Lerner and a backlash against the GOP.

STOCKMAN: Well, I mean, how many people are gonna sympathize with someone destroying IRS documents and pushing that kind of an agenda? I challenge people to side with someone with this kind of long record. I just don't think the sympathy is there. I mean, I don't feel it, my constituents are very happy in this action, and I don't think the average citizen looks at this and says, well, if the IRS can destroy documents, why can't I? There has to be a standard that we're all held to.

STOCKMAN: Well, Megyn, quite frankly, Eric Holder is under contempt to congress too. I mean, we have the cat watching the bird house it's not gonna be a case in which you're gonna have Eric Holder running out there, in fact, your clips just earlier showed that they're not even really investigating her. This is a farce. We have to take real action, and I don't know about you, but I get frustrated just watching this thing constantly going on in which the president says there isn't anything illegal happening. That's just simply is not what I see in front of me.

KELLY: Well, we'll continue to follow it. Congressman Stockman, thanks for being here.