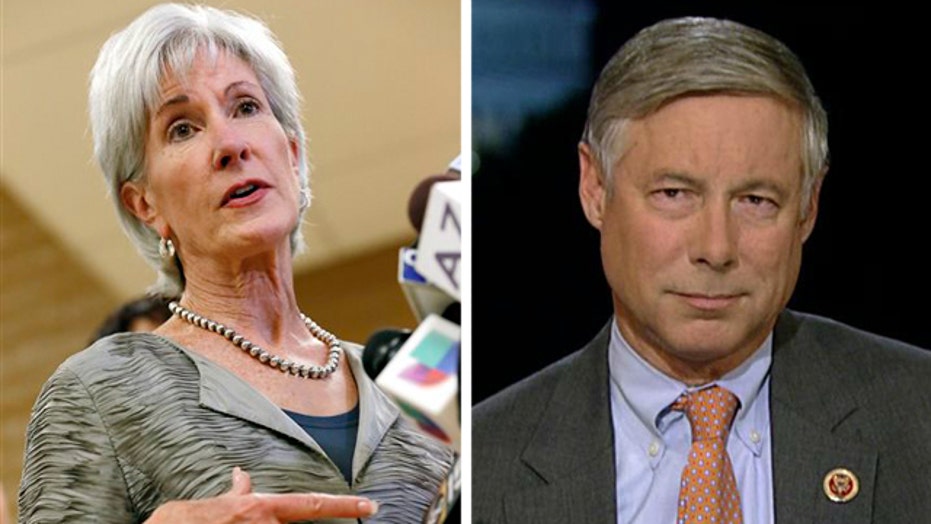 This is a rush transcript from "The Kelly File," October 24, 2013. This copy may not be in its final form and may be updated.

MEGYN KELLY, HOST: Michigan Congressman Fred Upton is a Republican and chairman of the House Energy Commerce Committee that you saw some of there. Mr. Chairman, good of you to be with us tonight. So, what did you learn? What was the most important thing you learned today in this testimony?

REP. FRED UPTON, R- MICH.: Well, we learned a lot. It was literally a five-hours hearing but, you know, the administration told us that they were ready when October 1st came at launch date that they would

be ready. They told us that last summer. A number of times in terms of formal testimony before our committee in letters and everything else. And today we learned that this was so compartmentalized that they actually

didn't test the whole system until only two weeks before October 1st. So they really didn't have any clue whether it was going to work or not. And it doesn't work. It still doesn't work three, four weeks after October 1st.

KELLY: Have we found out who the captain of the ship was? I mean, all these contractors are out there working on the website. Who was overseeing them? Who was calling the shots?

UPTON: And so, she'll testifying before our committee next Wednesday. CMS as I understand is going to be testifying before the Ways & Means Committee on Tuesday, I believe. So, we will be able to get even more answers out of them. And, you know, I know that she was in Arizona today and I think Boston a little bit earlier this afternoon. And meanwhile there are millions of Americans that are still unable to be able to sign up for this program. And lots of hours of frustrations.

KELLY: Well, and I know, you expressed a concern about what's going to happen next? That some people are getting letters in the mail saying, you're cancelled. Other people are trying to log on, and they can't do it, and they get halfway through. But tell us why are you concerned about what happened?

UPTON: Well, this is the easy thing. It's like when you order a book on Amazon or order a pizza Domino's or, you know, get an airline ticket from Delta. You're on there. You've figured it out. You got it down and you then wait to, you know, take that flight at the airport or pick up the pizza or have it delivered or whatever. Who knows if those services are ever going to be delivered? So, people have been told that they've lost their insurance. Literally, millions of Americans, they have got to sign up for this thing.

They can't quite figure it out. It's just a mess. But at some point, January of next year when their family gets sick, when they go to the doctor, when they go to the hospital, whatever the services, who know if the hospital is going to have the right information? Who know if the hospital or the doctor is going to get paid? And we may have a whole bunch of medical providers just say, you know, you're on your own. We are not going to participate. So, this is only getting to first base you may never get to second.

KELLY: Before I let you go, Frank Pallone, Democrat of New Jersey had this to say about today's proceedings.

REP. FRANK PALLONE, D- N.J.: So, once again here we have with my Republican colleagues trying to scare everybody.

UNIDENTIFIED MAN: Will the gentleman yield?

PALLONE: No, I will not yield to this monkey court or whatever this thing.

UNIDENTIFIED MAN: This is not a monkey court.

PALLONE: Do whatever you want. I am not yielding. I'm trying to tell you the problem here --

UNIDENTIFIED MAN: The gentleman has a legitimate concern of this committee.

PALLONE: The pre-existing conditions don't matter. HIPAA doesn't apply. There's no health information in the process. You are asked about your address, your date of birth. You are not asked health information. So, why are we going down this path?

KELLY: What do you make of those comments, sir?

UPTON: You know, what? This is a serious attempt to figure out what went wrong. And the taxpayers have spent hundreds of millions of dollars trying to develop a system. The administration told us, it was going to work. No problem. They looked us in the eye. No problems here at all. And nearly a month later it's still on half-life. No one knows how this thing is working at all. So, that was a serious attempt. There were good comments by Republicans and Democrats. We want answers. That's what this is all about. That's what our role is to figure out where we need to go.

KELLY: We'll be watching as the secretary says, she intends to appear next week.

UPTON: She better be there.

KELLY: Thank you for being here.