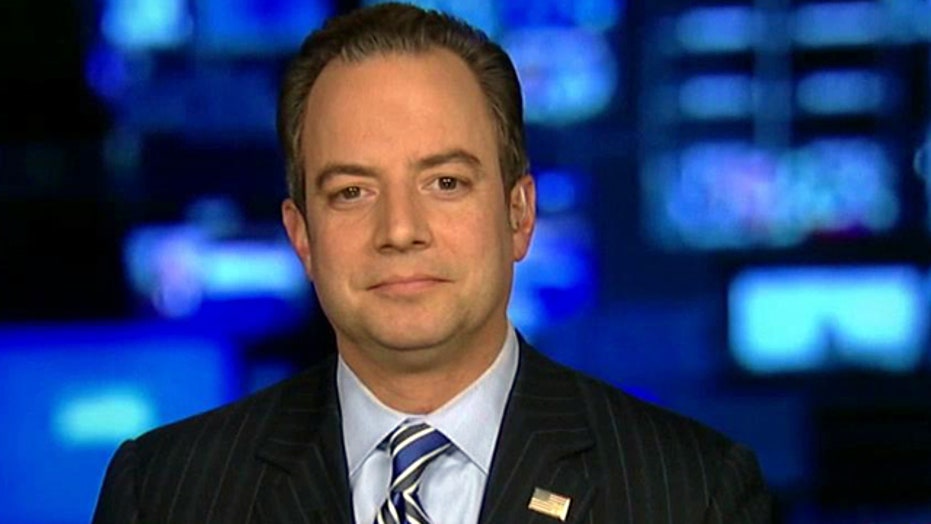 This is a rush transcript from "Hannity," January 30, 2014. This copy may not be in its final form and may be updated.

SEAN HANNITY, HOST: NBC News, they've done it again. Now, last night the left wing network posted a highly offensive tweet aimed directly at the GOP and conservatives. It read, quote, well, "Maybe the right wing will hate it, but everybody else will go awww: the adorable new #Cheerios ad with [a] biracial family." And then they linked to this heartwarming new Super Bowl commercial.

DAD: Hey, Gracie. You know how our family has daddy and mommy?

DAD: Yes, that is right. Pretty soon, you're going to have a baby brother.

DAUGHTER: And a puppy.

HANNITY: Now, NBC eventually apologized for the tweet. And they also said that, well, that was not going to be enough. So RNC Chairman Reince Priebus, earlier today he banned his staff from actually attending or appearing on any show on the network. Now, it took all day but the apology finally came, and that was issued this afternoon.

Joining us now, Chairman Reince Priebus of the RNC, and Mr. Chairman, welcome to the program. Glad you're with us.

HANNITY: Let's go through this a little bit here. You demanded the apology -- who is the head or leader of that propaganda firm?

HANNITY: Phil Griffin. And you got the apology. Where does it stand now?

PRIEBUS: Well, I mean, look, in their professed world of tolerance, they're sure hitting all eight cylinders of intolerance. It started with Melissa Perry and comments about Mitt Romney's new grandchild, Martin Bashir and Palin. One of their new hosts coming up was talking about some of the physical disabilities of that soldier hero from Tuesday night and using that as a political statement.

So here is what we did. This tweet came last night, and first thing in the morning I called Mr. Griffin, left a message, sent him a letter saying that we are not going to allow any of our surrogates or myself and all of the other world of Republican surrogates on the show, until they, one, apologize, and number two, did something of some corrective action on their shows to take some action.

HANNITY: But let me play this for you. I think actually you have shown a lot of patience up until this point, and, for example, especially on the issue of race. Let's play a little montage for you and remind you of some of the things that said prior to this incident.

CHRIS MATTHEWS, MSNBC HOST, JAN. 7: The return to something like Jim Crow days, all the old anti-black gimmickry of that time.

MELISSA HARRIS-PERRY, MSNBC HOST, DEC. 8, 2013: The word was conceived by a group of wealthy white men who needed a way to put themselves above and apart from a black man.

You all know the word I'm talking about -- ObamaCare.

MARTIN BASHIR, FORMER MSNBC HOST ,NOV. 15, 2013: When Mrs. Palin invokes slavery, she doesn't just prove her rank ignorance, she confirms that if anybody truly qualified for a dose of discipline from Thomas Thistlewood, then she would be the outstanding candidate.

ED SCHULTZ, "THE ED SCHULTZ SHOW," FEB. 24, 2010: You're damn right Dick Cheney's heart is a political football. We ought to rip it out and kick it around and stuff it back in him.

SCHLTZ, MAY 24, 2011: Do you know that they're talking about, like this right wing slut, what's her name? Laura Ingraham? Yes, she is a talk slut.

HANNITY: Especially on the issue of the race card, if anybody disagrees with President Obama, he pretty much will label them a racist. That is standard operating procedure there.

PRIEBUS: Yes, it is pretty disgusting stuff. And maybe you're right. Maybe it took too long. I understand, and quite frankly I've been a part of many of these comments, but nothing like what you just played. And, you know, I can take it. That is what you get when you're chairman of the party. But some of these things that are done about families and people's appearance and gender, race, blanket statements about people on the right side of our party, I'm just not going to stand up as chairman of the party and take it.

So, look, this was a first step. It was the first time I talked to Mr. Griffin. He reacted pretty quickly. And now we have to stay on top of it. So you know what? It is sort of like being on probation, I guess.

But the fact of the matter is, we're here, we're watching them, and it is our responsibility and mine in particular, I think, also to stand up for our party. And so that is what I did today. And I'll do it again. So I promise you that.

HANNITY: One has to wonder what Brian Williams and Tom Brokaw and even Matt Lauer think of their news brand the way it has been demolished by these radical left wingers. But we have to run. Go ahead.

PRIEBUS: They don't have a problem painting every Republican with a broad brush, and MSNBC and NBC have all this poison, we had to call them out on it. And I'm happy they reacted. But more to come.

HANNITY: All right, thanks Reince Priebus of the RNC.