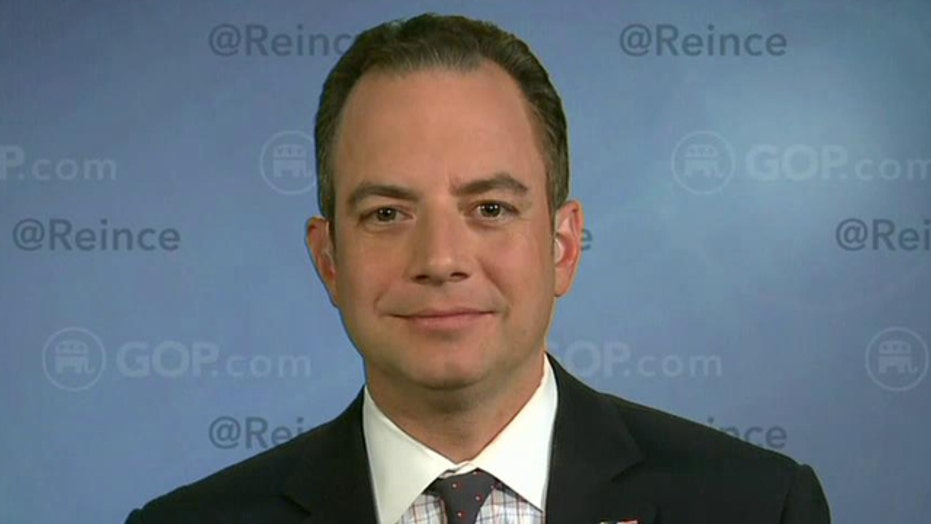 This is a rush transcript from "Hannity," October 2, 2014. This copy may not be in its final form and may be updated.

SEAN HANNITY, HOST: As Republicans work to gain control of the Senate, Republican National Committee Chair Reince Priebus is now laying out what he calls the party's 11 principles for American renewal.

Earlier today he delivered a speech at George Washington University to explain. Let's take a look.

REINCE PRIEBUS, REPUBLICAN NATIONAL COMMITTEE CHAIRMAN: Our party's three core values have long been a strong economy, a strong society and a strong defense. The principles of American renewal, which I'm outlining today, fit into those three categories. They represent ideas from across our party. These 11 principles unite us as a party and inform our policymaking.

HANNITY: Joining me now to talk about his party's strategy for winning come November the 4th is the chairman of the Republican National Committee, Reince Priebus is with us. Sir, how are you?

PRIEBUS: I'm doing great, Sean. How are you?

HANNITY: All right, first I got to say I have been the biggest critic of Republicans because I've been saying you guys need a governing vision that will inspire people. You didn't follow my model, so I criticize you for that. No, I'm kidding.

But there are a lot of good things in here. I think it's important. I think this has been missing from the debate, that is, what will Republicans do if they get control of the House or Senate? Are you saying this renewal or principles for renewal is the blueprint and you want Americans to know this?

PRIEBUS: Well, that's right. I mean, this idea that we're the party of no and we're just against Obama and that's it, that's ridiculous. You're absolutely right. You've been pounding this drum now for about nine months. And if you look at your five principles, Sean, school choice, energy independence, the penny plan, balanced budget amendment, they all fit nicely into these same principles. In fact, I think four out of five of them are right here verbatim. And I think that that's what America needs to see.

And we have a responsibility, and I agree with that, too, as a party to tell people what we're for. And we also have a responsibility to try to unite our party. I mean, we've got a lot of different voices. And I'm proud to say as far as party unity and this document and this vision, everyone from Mike Lee to John Boehner to Ted Cruz, you know, to Mitch McConnell, to Newt Gingrich, they're on board with what we're doing. And social conservatives like Tony Perkins and others, they're on board as well.

So we're unifying the party, telling people what we're for. It's important.

HANNITY: I don't see anything here that's divisive. In other words, look, there is a coalition party like the Democratic Party, and you have Tea Party, the conservative wing of the party. And you have the -- I know they hate the word -- establishment wing of the party. First of all, I think you outdid me, because the Constitution does in this day and age under Obama, needs to be preserved, valued, and honored. This president, in my view, has run rough shot over the Constitution. So I was glad you put that in there.

The economy, I know you didn't put in my penny plan, but a balanced budget amendment is imperative. We've got to stop robbing our kids blind.

PRIEBUS: Well, I like the penny plan myself. I mean, as far as like specific types of litigation, I support that.

But, you know, look, what's also important is give the American people a choice. So if you go look at school choice, every parent, what our party stands for is that every parent in this country ought to be able to send their son or daughter to the school of their choice. No parent should be forced to send their child to a failing school.

Now, to most people that seems like a pretty reasonable thing to say.  But that's not what the Democrats believe. They would tell you that your child is doomed to the school that their zip code dictates. That's a choice.

You know, things like the message on the economy. Well, at first glance you say, what we're saying is that we want to grow America's economy, not Washington's economy, so that American workers get a leg up.  Now, again, another reasonable thing and position for us to take, but that's not where the Democrats are at. They want to plant the seeds here in Washington on concrete where they can't grow.

And no matter what your position is on the growth of government, I think people across this country know that government has failed them.  It's too big. It's gotten out of control. We need to go back to the Constitution.

HANNITY: I think this is a pivotal moment in our history.

So, anyway, I applaud you for doing it. And, Mr. Chairman, thank you for being with us. Thanks.