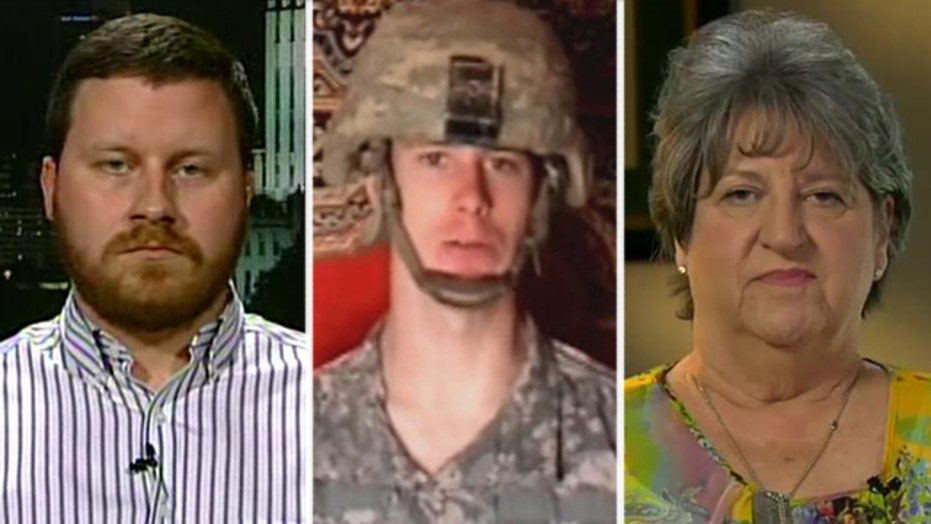 This is a rush transcript from "Hannity," July 14, 2014. This copy may not be in its final form and may be updated.

SEAN HANNITY, HOST: The U.S. Army announced today that recently freed Taliban POW Bowe Bergdahl who disappeared from his base in Afghanistan in 2009 will in fact return to active duty. Now, Bergdahl will live in the Army barracks and do administrative work at a base in San Antonio. Last month the Army announced there was no evidence of misconduct by Bergdahl while in captivity, but the investigation into the circumstances surrounding his disappearance and his capture, well, they're still ongoing.

Here with reaction tonight to the breaking news a man who served alongside Bowe Bergdahl in Afghanistan Cody Full is with us. And Sandra Andrews is with us. Her son Darren was killed while searching for Sergeant Bergdahl.

Guys, thank you both for being here, appreciate it. Cody, let me start with you. Did they talk to you or any of your platoon mates about the circumstances under which he left? Did they do an investigation?

CODY FULL, BERGDAHL'S PLATOON MEMBER: At the time of his disappearance, yes, we all were involved in the original investigation.  Since General Dahl has been announced three and a half weeks ago that he is the leader of the new investigation onto why Bergdahl deserted, he has not contacted any of us.

HANNITY: In other words --

FULL: Nobody in platoon.

HANNITY: Nobody in the platoon has been contacted about the circumstances under which he left, because I had the platoon leader on the show who said he heard a radio transmission from local people that said he was looking for the Taliban. True?

FULL: That was through LLVI trafficking, yes. He did confirm that he did hear that.

HANNITY: What is the reaction, what is your reaction to the fact he's going back to active duty?

FULL: Well, you know, it's just reports haven't been confirmed yet by the Army that I know of. I'm still surprised we have yet to be reached out to by General Dahl, because if you do and investigation I think you need to hear both sides of the story. And he's had plenty of time for the investigation, three and a half weeks to at least reach out to us and say that, you know, hey, I will be contacting you all at a certain time. And we haven't got any of that yet.

HANNITY: Sandra, your son was one of a number of people that died in the search, the ongoing search for Sergeant Bergdahl. What is your reaction to today's news?

SANDRA ANDREWS, MOTHER OF FALLEN SOLDIER: I was really surprised. I was. Why would he be going to work when he's -- you know, they suspect he deserted? Usually you would think he would be incarcerated in the brig or somewhere until that was investigated.

HANNITY: Let me put up on the screen, because we do have some evidence that suggests that I would argue suggests that he should not be put back to active duty. One is Sergeant Bergdahl slamming the U.S. Army in an e-mail to his parents, said "The U.S. Army is the biggest joke in the world that the world has to laugh at. It is the army of liars, backstabbers, fools, bullies. The few good sergeants are getting out as early as they can and they're telling us privates to do the same." That was in Rolling Stone magazine that was covered.

And then a New York Post report showed that days prior to his captured Bowe in an e-mail to his parents wrote that he's ashamed of America. "I'm sorry for everything here. These people need help, and what they get is the most conceited country in the world telling them that they're nothing and that they're stupid. I'm ashamed to be an American, and the title of U.S. soldier is just a lie of fools. I'm sorry for everything. The horror that is America is disgusting." That guy is on active duty for the same country and he's going to get a check for $350,000, Cody?

FULL: Well, you know, I think, you know, the Army needs to do what's right here and they need to abide by the Army values. And he needs to face consequences for his actions. Not only is it a slap in the face to all the men and women who have served honorably, who upheld their oath, and it's also a bad precedent to set towards future service members that, you know, hey, I can join the military and do whatever I want and get away with it.

HANNITY: There's enough information here that tells me he should not be on active duty. And Sandra lost a son over this. All right, guys, we'll stay on the story, I promise. Thank you both for being with us.