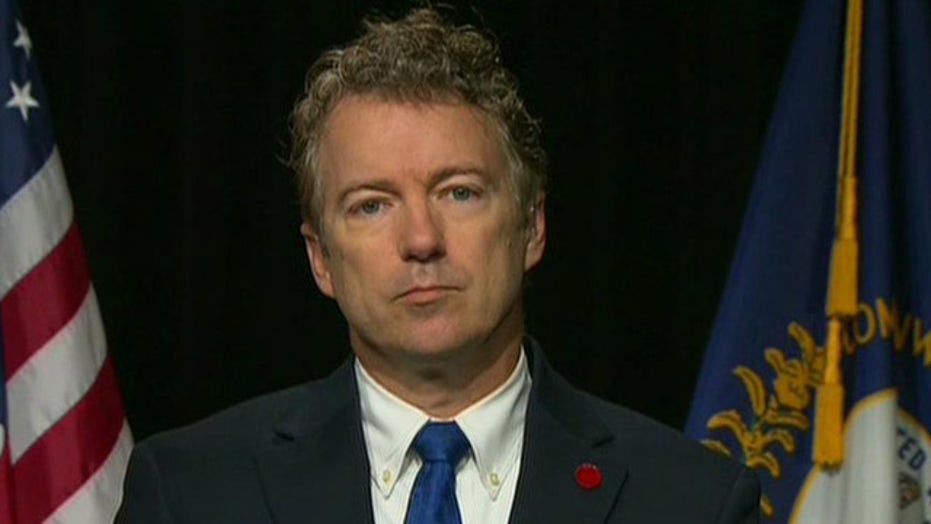 A look at the agency's domestic surveillance programs

This is a rush transcript from "Hannity," January 3, 2014. This copy may not be in its final form and may be updated.

Senator, others have filed, but your class action lawsuit is the first of its kind, and this takes this to a whole new level. Tell us all about the lawsuit, sir.

SEN. RAND PAUL R-KY.: Well, the thing about it is, is the question here is whether or not, constitutionally, you can have a single warrant apply to millions of people. So we thought what better way to illustrate the point than having hundreds of thousands of Americans sign up for the class action suit.

So about six months ago, we began this call. And we now have several hundred thousand people who want to be part of this suit to say to the government and to the NSA, No, you can't have our records without our permission or without a warrant specific to an individual.

So it's kind of an unusual class action suit in the sense that we think everybody in America who has a cell phone would be eligible for this class action suit. And if any of your viewers have a cell phone, they just have to go to my Facebook tonight and they can sign up to be part of the lawsuit.

We want to overwhelm the government, and we want to show publicly that hundreds of thousands of people don't -- we object to the government looking at our records without our permission.

BOLLING: And one of your lead lawyers is Ken Cuccinelli, is that right?

PAUL: Yes, Ken Cuccinelli is the former attorney general for Virginia. He also was the first attorney general to file a lawsuit against ObamaCare. And he's joined our legal team. He has constitutional expertise. And we're hoping with his help that we can get a hearing in court and ultimately get this class action lawsuit, I think the first of its kind, on a constitutional question, to take it all the way to the Supreme Court.

BOLLING: So, are you looking for the administration, President Obama specifically, to turn to the NSA and say, "Hey, be more diligent when you go to the FISA court to ask for the warrant"? Is that what you're looking for?

PAUL: Yes, well, you know, I've actually introduced legislation that would make it more specific. When the president goes to the FISA court and the FISA court issues a warrant for all of the cell phone records in the country, we want the cell phone provider to be able to appeal the FISA court, which is a secret ruling -- we want them to be able to appeal that ruling into a public court, such as the Supreme Court, because we don't think a question of constitutionality should be decided in secret.

BOLLING: Now, this sounds like -- maybe it sounds like a crazy question, but I -- I'm very serious about this, Senator. Are you worried that you're being monitored by the NSA and other -- and other agencies?

PAUL: You know, I don't really think so. But I think that the potential for the abuse exists. Think about it in this context. We now have an administration that has used the IRS to go after people who are of conservative political bent or have certain religious beliefs. So they've already shown that they will use what is supposed to be impartial, the IRS, to do it, leads me to wonder and worry whether or not they would use the NSA that way. I have no proof that they have, but I am concerned that it could be abused.

But I'm also concerned that even if a president isn't going to abuse a power, I am concerned that the president thinks he has the power to collect all our records. And when they came out of the White House with several congressional leaders about a month ago and they said, "Oh, we're not spying on Americans, because they defined the collection of this data not to be spying," I am concerned that they're going to whitewash this and that he's going to say, "Oh, we have these reforms, we have looked internally and we have some new controls."

BOLLING: All right, Senator, let's play a sound bite from March of 2013, with James Clapper testifying to a Senate -- to -- I believe it was a Senate panel, a Senate or Congressional panel. Listen to the sound bite.

SEN. RON WYDEN, D-ORE.: Does the NSA collect any type of data at all on millions or hundreds of millions of Americans?

WYDEN: It does not?

CLAPPER: Not wittingly. There are cases where they could inadvertently perhaps collect, but not -- not wittingly.

BOLLING: So given what we know now, that -- that appears to be a false statement given to the Senate panel. That was Senator Wyden. Should he -- should James Clapper be prosecuted?

PAUL: Well, lying to Congress is a felony, and I don't think we can pick and choose the law. You've got all of these people, like James Clapper and others, beating the table and saying that we want to put Edward Snowden in jail for life, and yet they don't want the law applied to themselves? No, the law has to be applied equally. And that's one of the real tenets of American jurisprudence is you apply the lie -- law -- the law equally.

I, frankly, think it would be somewhat enlightening for James Clapper and Edward Snowden to share a prison cell, and then maybe we'd all learn a little bit from that.

BOLLING: Do you distinguish between the data mining of phone records, which would be who I called, how long I spent on the phone and the -- and the phone number of the -- the number I called, versus some of the bodies of these, the actual conversations we've had, and maybe even the same going for e-mails, not only just who I e-mail, but what I'm actually saying in the e-mail?

PAUL: I think this is something we have to figure out and the courts have to decide. I am worried about metadata, people dumbing that down and saying it doesn't mean anything.

For example, my Visa bill -- some would call that metadata. But if you look at my Visa bill, you can tell whether I drink, whether I smoke, what magazines or books I read, whether I go to a doctor, what medicines I take. And they might just say, "Oh, that's metadata because it wasn't the content of an e-mail."

I am very concerned that those are private matters and that the government should only look at your Visa bill or your phone bill if they have a warrant that is specific to you and says that they think that you have committed a crime. And then I think it would be appropriate.

But without a warrant specific to an individual, I think it's -- it's illegal and unconstitutional.

BOLLING: All right, before we let you go, we're -- just tell us again where we can learn more about the lawsuit, where -- they can sign up on your Facebook page. Is there anywhere else you can do this?

PAUL: Yes, if you go to my non-governmental Facebook page, you can sign up there. You can go to RandPAC and sign up there, as well. There are several different venues.

But if you have a cell phone in America and you're unhappy about the government looking at your data, your records, or even possibly your content, go to my Facebook page and sign up because we'd love to have you be part of this class action suit.

BOLLING: And Senator, very quickly, you expect to have several hundred thousand Americans sign up, is that right?

BOLLING: Very good. We're going to leave it right there, Senator. Thank you very much.