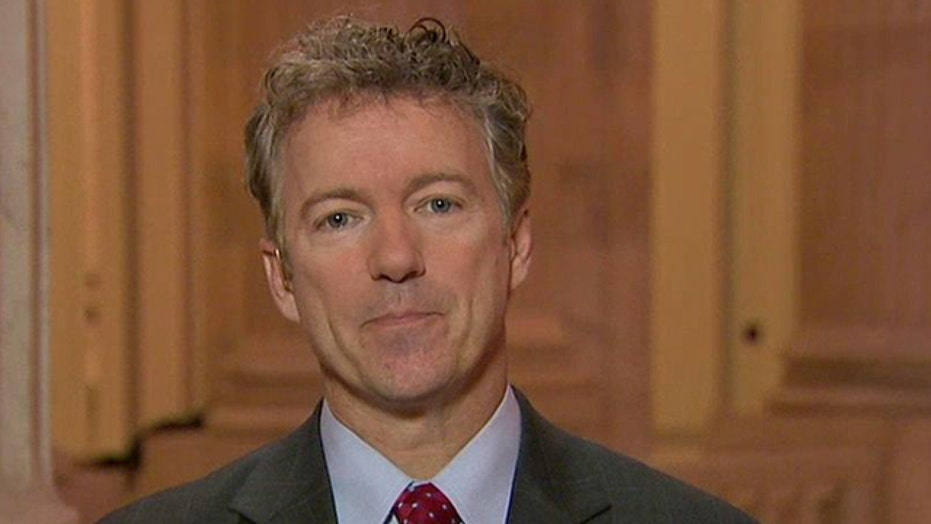 This is a rush transcript from "Hannity," February 12, 2014. This copy may not be in its final form and may be updated.

Calling it one of the largest class action lawsuits in history, the senator alleges that the NSA surveillance program violates the Fourth Amendment which prohibits unreasonable search and seizure. Here to explain, the man himself, Kentucky Senator Rand Paul. Senator, welcome back good to see you.

HANNITY: The legal action is officially entitled "Rand Paul Versus Barack Obama." And from what I read you're kind of hitting the ground running you have over 350,000 plaintiffs. You expect millions of Americans will join this?

PAUL: Well, the interesting thing about this is the class could include anybody who has a cellphone or anybody who has a landline. So it is really virtually everyone in the United States. And I think that illustrates the problem, is that a single warrant should not apply to so many people.

The Fourth Amendment said that if you want a warrant to look at someone's records to invade their privacy, you have to name the person, the place and the items. You can't just say OK, we're going to search everybody's home in Washington D.C. or Bowling Green, Kentucky. You have to name the person. That was to protect our privacy. And so we really think the NSA program has gone way overboard, and we want a decision in an open court, in the Supreme Court where there is open debate. We think that is the only thing consistent with a constitutional republic.

HANNITY: I would support data-mining - and I have supported data-mining of terrorists, of suspects. The law specifically prohibits the spying against Americans. I have talked to the author of the bill - Jim Sensenbrenner -- numerous times. This is not what it was designed for, intended for, explicitly says you cannot do, doesn't it?

PAUL: The president when he talked about privacy recently, he said this was like the history of Paul Revere warning us. But Paul Revere was not saying the Americans are coming. He was saying the British were coming. It was about a foreign invasion.

So really I think he has it wrong. And the fact that he thinks he can look at all of our records without a cause, without probable cause or suspicion, see, that is what warrants are based on. You go to a judge and the police say to the judge we think this person robbed the store, we think this person is a murderer or we think this person is a terrorist. They present evidence because this protects us from them from going into everyone's home or invading everyone's papers. This is a big and very important and to me a momentous constitutional issue. And so far it has only been decided in secret. We have these courts called FISA courts which are national security courts. But this is a question of the Constitution, and it needs to lift the veil of secrecy and needs to be debated in public.

HANNITY: One thing we share a concern on here is they are literally data-mining, every American that has a phone potentially has been tapped by the government. And it doesn't seem like a smart thing to do. You're not going to look at the Yemeni exchange student and give added scrutiny to that student, but you're going to search grandma and you're going to wand her and waste a lot of time on a two-year-old baby. It seems like with the limited resources we have that it's better, more cost-efficient to target the people that we're looking at.

PAUL: Think about it. Even with this data-mining that we're supposedly doing on every American, the Tsarnaev boys, the brothers who were the Boston bombers one of them had a website where he talked about terrorist bombing, and he was also communicating with Muslim extremists, and the Russians had tipped us off. And yet we didn't have any idea he flew back to Chechnya and we weren't checking up on him I think sometimes because we've misdirected millions and billions of dollars of resources to looking at Americans instead of targeting our spying on potential terrorists.

HANNITY: I think you and Freedom Works and Ken Cuccinelli have a very strong case here. There are a lot of things happening though, that the term I would use is "lawlessness," and now the president yesterday once again delayed implementation of the employer mandate. Last year the president pushed it back for a year. The Administration unilaterally waived work requirements for the welfare program. When the Dream Act failed to pass Congress, the president unilaterally told federal agents to stop enforcing immigration law, and there are many other instances. Don't we have checks and balances, co-equal branches of government, separation of powers? Because that seems to be lawless to me, and he is usurping the congressional branch or Congress itself. What do you think?

PAUL: Yes, and the Constitution set it up where legislation came from Congress. But now we have the president essentially doing legislation or amending legislation. So yes, I think it's illegal, unconstitutional. And in fact our founding fathers looked to Montesquieu, the philosopher, on the separation of powers, and he wrote that if the executive becomes the legislative branch that it will be a form of tyranny. And so it is important that we stop him. So I'm suing over the NSA. I can't sue him over everything unconstitutional he's doing, but we hope somebody else will.

HANNITY: Why isn't Congress holding him accountable? Terry Jeffries brings up that point in a really good column on CNS News today. Why are the Republicans not checking in this usurping of legislative power?

PAUL: I think they try some in the House. The more disappointing and the more -- I think -- pertinent question is why aren't the Democrats standing up for the Constitution? This shouldn't be a partisan issue. There should be Democrat heroes who will stand up in the Senate and say I know he's a Democrat president, but I also know reading the Constitution doesn't allow him to amend or create legislation, and therefore, even though I support him, I will stand up, because we need that. Otherwise, if the Democrats don't stand they just keep running roughshod over us.

HANNITY: Good to see you, senator. Good job today. We're going to watch it very closely, Rand Paul versus Barack Obama making its way through the courts. Thanks for being with us.

HANNITY: Coming up, we're going to check back in with Jonathan Serrie tonight as this powerful winter storm continues to impact many states across the country in the south and northeast and beyond. And a quick programming note, this Friday night, 10:00 eastern, in honor of President's Day, we will be airing a Bush family album, it's hosted by our colleague, Brit Hume. And the show brings the personal scrap book and the war diary of the 41st president all to life. Coming up this Friday, 10:00 eastern.