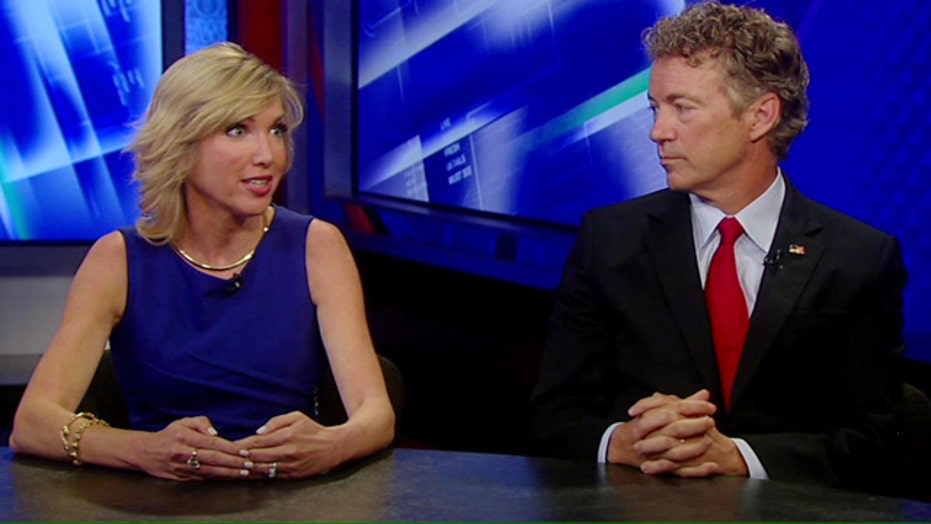 Exclusive: Rand and Kelley Paul open up about the 2016 race

This is a rush transcript from "The Kelly File," May 26, 2015. This copy may not be in its final form and may be updated.

MEGYN KELLY, HOST: Breaking tonight, new fallout in the heated fight over the Patriot Act and whether opposition from Senator Rand Paul and his supporters may leave America at risk.

Last week the senator mounted an 11-hour sort of filibuster over the intelligence bill are giving the feds too much power to collect personal data. Then he stymied another push on the bill on Saturday. He has since been attacked by everyone from the White House to Republicans like Chris Christie who believes he is endangering the public here.

Earlier I sat down with Senator Paul, now a GOP contender for president, along with his wife Kelley. She also has her own book out. Hers is called "True and Constant Friends." Senator Rand Paul's new book is out right now, it's called "Taking a Stand: Moving Beyond Partisan Politics to Unite America." We spoke at length about the NSA program.

KELLY: That is your issue. You've been the standard bearer on opposing some of these things that the Patriot Act allows. Yet your critics accuse you of over stating the case. For example, one of the things that you said was that the NSA is spying on all your phone calls and you know, that's not true. It doesn't have cell phone data in almost any case.

SEN. RAND PAUL, R-KY., PRESIDENTIAL CANDIDATE: It's actually not what I've said. I've been saying the NSA is collecting all of your phone records.  By connecting the dots of your phone records, they have determined they can determine your religion 85 percent of the time, who your physician is most of the time, what medicines you have. They can even tell when you go to the doctor, by inference maybe what kind of procedures you're having at your doctor's office.

KELLY: How? The Wall Street Journal had a report that said the NSA is collecting records of at most 20 percent of U.S. calls and in general, they do not look at cell phone records.

PAUL: The interesting this is two Stanford students put apps voluntarily on phones for 500 people and just looked at their metadata, and then they tried to deduce through other means from just the phone records, and they could tell most of the time what your religion was, who your doctor was, what doctor you were going to see, what kind of diseases you had. And even what kind of procedures you had.

KELLY: But that's not how this program works. This program -- this is what the critics outlined, they say that you get no names, you get no addresses, no personal identifying information. The NSA doesn't even know you exist. They just have phone numbers and only look further into that phone number if a terrorist calls the number.

PAUL: But our Founding Fathers didn't like the idea of general warrants. Warrants that didn't have a specific name on, that were not individualized, that didn't have any suggestion of suspicion, and weren't signed by an independent judge. That's what the Fourth Amendment is about.  So when we have one warrant and the name on it says Verizon and then they collect all the information from all the Americans that have phone records with Verizon, it doesn't really seem to be consistent with the Fourth Amendment because it's not individualized. There wasn't suspicion. And actually, frankly it makes us less safe.

KELLY: They can't even access that data unless something suspicious happens. A terrorist calls --

KELLY: People like Andy McCarthy had said, the Fourth Amendment doesn't protect you -- you have no right in Verizon...

PAUL: That is the debate. That is the real debate we have. Because the question is, do you have a privacy interest or a property interest still in records that are held by other people? When you sign up and you have phone service, you do have a privacy agreement, your phone company isn't supposed to share that with your neighbor.

KELLY: That doesn't elevate it to a constitutional problem.

PAUL: Well the question is whether or not you do have Fourth Amendment protection, in records that are held by the companies. Once upon a time...

PAUL: It's not yet to be decided in the modern era.

KELLY: There was a Supreme Court opinion back in 1979 that specifically said you don't have a privacy interest.

PAUL: In Maryland vs. Smith, it was talking about one person, and a few records of somebody who was accused of committing a crime. It was never and has never been adjudicated whether you're looking all Americans, all of the records, and all of the time.

KELLY: You can see they don't listen to content.

PAUL: This is an enormous program. This is collecting all Americans' records all of the time.

KELLY: But just numbers -- only 20 percent, according to The Wall Street Journal.

KELLY: Let me ask you, Kelley. I want to shift to you again. Because you -- now if Senator Paul wins this election, you would be the first lady.  Is it bizarre to think you and Bill Clinton are vying for the same job?

KELLEY PAUL, "TRUE AND CONSTANT FRIENDS" AUTHOR: Yeah bizarre is one word I would use.

K. PAUL: No, absolutely not. You know, I regret in some ways that people kept asking Rand about it, he was originally asked on "Meet the Press" if he agreed with the comment six months after I made it.

KELLY: Why is it not fair game to talk about Bill Clinton's history?

K. PAUL: I think it is which is why I made it. It was more actually, though, I think some of it was misstated. My point was more about the hypocrisy and the Democrat Party, that it wasn't more roundly condemned, that people -- this is the party that purports to be the party of women, and it was a workplace situation, a 22-year-old intern. And she was 22. People have now tried to go back and say, oh, no -- and the president of the United States. I don't consider that a peer relationship. It's not criminal but it's certainly something we would see as not appropriate in the workplace.

KELLY: I will answer my own question. The answer is no. No.