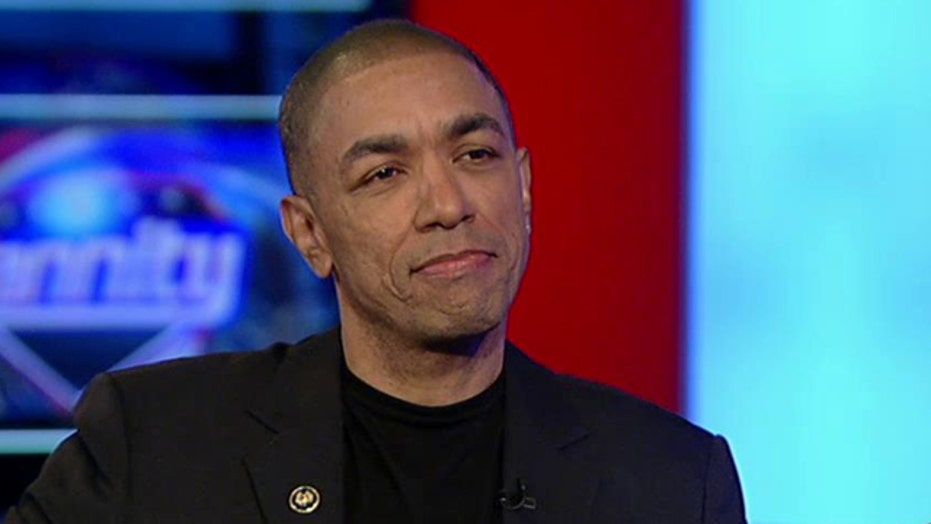 Inside the Obama family

This is a rush transcript from "Hannity," September 16, 2014. This copy may not be in its final form and may be updated.

SEAN HANNITY, HOST: President Obama never hid his desire for the rich to spread the wealth and give their fair share.  Here's a small sample. Take a look.

THEN-SENATOR BARACK OBAMA, OCT. 12, 2008: It's not that I want to punish your success. I just want the make sure that everybody who is behind you, that they have the chance at success, too. And I think when you spread the wealth around, it's good for everybody.

PRESIDENT OBAMA, JAN. 25, 2012: If everybody is getting a fair shot, everybody has a chance to do better.

Americans who can afford it should pay their fair share.

I think that's a fair approach.

Americans who can afford it should pay their fair share.

OBAMA, JULY 21: And that's part of what My Brother's Keeper needs to be, is just one more tool that you have to expand your network of people who can support you.

HANNITY: All right, does the multimillionaire president practice what he preaches amongst his own family? Joining me now, the author of the brand new book "An Obama's Journey, My Odyssey of Self-Discovery Across Three Cultures," President Obama's half-brother Mark Obama Ndesandjo is with us. How are you? Got to meet you yesterday, good to see you again.

HANNITY: We had a good discussion on radio.

OBAMA NDESANDJO: We did. And we covered a lot of topics.

OBAMA NDESANDJO: And we even included some music.

HANNITY: Because you're a musician and an artist.

HANNITY: I asked the crew, because I think you look like your brother a lot.

OBAMA NDESANDJO: I do. There's a connection.

OBAMA NDESANDJO: We have the same dad, Sean, and you know, we're part of a big family, as you know.

HANNITY: I'm sorry. I don't want to age you. Why did you not connect before then?

OBAMA NDESANDJO: You know, when I was growing up in Kenya, my father Barack Obama Sr., we had a history of domestic violence for seven or eight years. And it was a very powerful and destructive event in my life.  Basically I wanted nothing to do with the Obama name for a long period after that because I couldn't protect my mom. He was brilliant, but he was a tortured man.

HANNITY: You talk in the book how you were more willing to accept your father's flaws than Barack. By the way I never thought I'd have an Obama on the show.

OBAMA NDESANDJO: Well, I think in the future, you know, if we work -- if we work it out somehow, maybe we'll got some other Obamas.

HANNITY: Can you make that happen? Can you bring Barack with you next time.

OBAMA NDESANDJO: Well, you have to treat some of us nice.

HANNITY: Have I not been nice to you?

OBAMA NDESANDJO: You've been very nice to me. And I must admit you've been very gracious. And also you're being a person who is truly trying to understand, understand our family, and I appreciate that. I know you also want your millions of listeners to also understand more because --

OBAMA NDESANDJO: -- we want America to move in the same direction.

HANNITY: I see your brother as a rigid, somewhat radical ideologue.

HANNITY: I think he was shaped by the likes of Frank Marshall Davis and Jeremiah Wright and Bill Ayers, and I talked a lot about that.

HANNITY: You talk a lot in your book and in "Dreams of My Father," his book, a lot of talk about race.

HANNITY: And how being of mixed race impacted both of you. How did it impact you, and how do you think it impacted him?

OBAMA NDESANDJO: You know, the issue of race is something which, particularly for mixed race kids, is very powerful and very strong. You know, in our global economy things are becoming much more integrated.  We've got different races and different cultures getting closer together, marrying and so forth.

You know, the reason I wrote this book was to tell my story, not to have other people tell it for me. Barack did the same thing. And I respect him in the sense that he was trying to use the book for his own purposes and also for his own identity.

Now, that said, I know that when I was growing up, a lot of things in terms of my African culture -- I'm half-black, half-white -- I did not accept it because I associated it as a child, when you're this high, with my father who -- and I couldn't protect my mother. And I remember the thuds and the screams and not being able to help her in any way. And that's something which affected me and moved towards western culture. I loved Beethoven, Bach, Mozart, as you know, Fats Waller. And these are things which at the time when I first met Barack I felt that he was not interested in.

On the other hand, he was a person who was brought up in that culture, in America, in white America. And I think when he was coming to Kenya, that balmy summer 20-odd years ago, he was trying to find out more about his African roots. And the book talks about that and a conflict.

HANNITY: What are we to make of the fact that here you're his brother and you've met, but you haven't had a lot of contact. How many times have you been with him now?

HANNITY: You talk about it in the book. I guess you first met in '88, and you met before the inauguration. How many times?

HANNITY: What was the number?

OBAMA NDESANDJO: The most significant times have actually been about three of them. And those were the first ones in Beijing, and then also recently in Austin, Texas. We've been in contact since this presidential election and so forth. And the most recent was actually at the last inauguration.

HANNITY: But as I play all this about spread the wealth and everybody is paying their fair share and Americans can afford to pay more and be our brother's keeper. And there are five siblings from your father.

HANNITY: In all honesty it's less than a dozen the times you've been around your brother. He's the president of the United States.

HANNITY: You have another brother that I would categorize -- you took issue with me on the radio, lives in a hut, has no money. He did an interview with Dinesh D'Souza's movie. To me, shouldn't that brotherly love started at home? In other words, he's a millionaire. He has a brother that doesn't have any money in Kenya.

I remember at the time, I said I'd give him $1,000, give him something. Yet he doesn't help that brother. Is that hypocritical?

OBAMA NDESANDJO: Let me share with you. You know, there are lots of things that good on in families which are not public. I mean, you know, a lot of people don't know, for example, that Barack was one who helped a lot of the poorer relatives in Kenya come to Washington, D.C., you know, for the first inauguration. It was a very special time.

You know, for a country like Kenya, which is a developing country as opposed to a developed country like the United States, there are huge differences. But status is also important and being able to be with your family.

HANNITY: Shouldn't he help his brother who doesn't have any money?

OBAMA NDESANDJO: My understanding is that Barack has helped in a number of ways, but maybe not so obviously.

HANNITY: It sounds like -- My Brother's Keeper. Let me ask you a last question.

HANNITY: You talk a lot in your book about your background. I've gotten some insight. I think about --

OBAMA NDESANDJO: I hope you liked it.

HANNITY: It's interesting to me because I feel like I have a pretty keen understanding of your brother.

HANNITY: I'm not -- how do I say this delicately? I can't say it delicately. I think that your brother does not have the capacity to grow as a president and politician. I find him incapable of abandoning what I believe are radical socialist views. How do you see him?

OBAMA NDESANDJO: Well, that's the greatness of America, isn't it? We all have different points of view.

OBAMA NDESANDJO: I don't think Barack needs me to defend him. He's strong. He's got a great team of people around him.

HANNITY: But if somebody says something about my sister, I'm going to jump in and defend them.

HANNITY: He did do that.

OBAMA NDESANDJO: He did do that.

HANNITY: I think he brainwashed them.

OBAMA NDESANDJO: He inspired them.

OBAMA NDESANDJO: And, you know, part of that is that's a rare thing, and especially when you consider that a lot people in the world, they need hope.

HANNITY: I think he didn't live up to the hype. The speeches were great, the teleprompter was great, the Greek columns were great, but he didn't live up to the hype. Fewer Americans are working, the economy never recovered. He seems paralyzed to deal with ISIS. I don't know. I'm just -- I agree he did captivate a nation, but I don't think he could follow through. Is that a fair criticism or unfair? We got to go. Real quick.

OBAMA NDESANDJO: My feeling is that it needs to be corrected in terms of that criticism.

HANNITY: OK, fair enough. I'll leave it there. I did enjoy the book. I enjoyed meeting you as well.

HANNITY: And thank you for coming in.