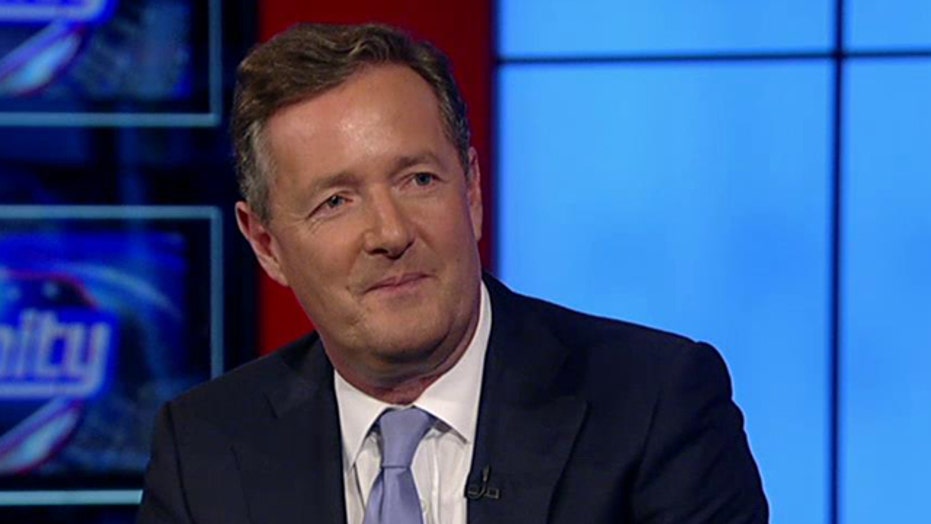 This is a rush transcript from "Hannity," October 6, 2014. This copy may not be in its final form and may be updated.

SEAN HANNITY, HOST: He has just been named editor-at-large of the Mail Online and he is already making waves. Piers Morgan recently wrote that President Obama has committed, quote, "professional suicide" and, only a British term, a "Slapdash Secret Service detail isn't what is wrong with the White House. The real scandal is a president who is so complacent about protecting Americans." He went on to write, "It's time he got off the damn golf course, got up to speed with his intelligence briefings, and focused on wiping out ISIS before they wipe out more of the people that he serves."

PIERS MORGAN, EDITOR-AT-LARGE, (U.S.) MAIL ONLINE: It's good to see.  I've competed against you, or tried to, for many years, and it's good to be here.

HANNITY: I look at you as a colleague, and I'm glad you -- you're here. There's a lot of hostility in this business. We never had that.

MORGAN: We didn't. You were very nice to me. We spoke in a restaurant. I was dining out one night and you were very chivalrous about our supposed rivalry. And I appreciated that. Yes, we're in the same game.

HANNITY: First of all, from my standpoint you saying this seems like a reversal. In other words, I feel like I understood Barack Obama in 2007 and '08. But for you, you now are like waking up. It's like, what is he doing? I have felt like that the whole time.

MORGAN: I feel with Obama that his real issue is what is his legacy going to be and what kind of America does he stand for and represent. And that's where I think he's been a big disappointment, and he must be to himself, because what will be his legacy?

You know, I have big issues with him personally over issues like gun control. You and I disagree over that. But with Obama I watched him go down to Newtown, look those families in the eye and promise I will get action, and then deliver precisely nothing. So if you were a believer in Obama's ability to deliver, then that was a pretty crushing disappointment on an issue that is dear to my heart.

Now, take the piece I wrote for "The Mail" online this week. It just struck me Obama when he threw James clapper under the bus and the entire --

HANNITY: He blames everybody but himself.

America shouldn't be leading anything from behind. America is at its best a great superpower. And when it's at its best, whether it's dealing with Ebola on a humanitarian level or ISIS on a terrorism foreign policy level, America has to be confident, bold, and strong and decisive.

MORGAN: And it's that lack of decision-making that I think leads to the issues we now face.

HANNITY: You know what frustrates me, Fort Hood is still officially in this country an example of workplace violence. What happened in Oklahoma, you've watched -- you've read this guy's Facebook page. It's all about jihad. They won't say it was an act of terrorism either. ISIS is not Islamic according to the president. And we're not at war with ISIS even though we're bombing them.

MORGAN: And this is all just nonsense rhetoric, because ISIS clearly is an Islamic fundamentalist organization. It's a terror group. And when they start beheading American and British citizens in these gruesome snuff movies that they're making and releasing them to the world taunting --

MORGAN: -- taunting these countries, it's not good enough to simply say, yes, I'm really upset about this beheading, and then seven minutes later, as Obama did, go to a golf course and be seen goofing around on the first tee. That really hit home to me. Someone did a survey this week.  They counted up the number of hours that Obama has been playing golf since he was president. It was about 850 hours if you base it on a five-hour round.

HANNITY: More than the time he spent in his intelligence briefings.

MORGAN: He attended 42 percent of his daily briefings, total hours of that 650 or something. He spent 200 more hours whacking a golf ball than attending his daily briefings. Now, it's not as simplistic as that.  Obviously he would get other briefings. But such terrible imagery to me, and I've basically been reasonably supportive of him. What the hell is he doing to groups like ISIS and others intent on causing America and Britain serious harm?

HANNITY: I don't think he understands the nature of the enemy. And I think it's evil in our time. Otherwise no human being with a conscience or soul could do that. Because I don't have you very long, I want to switch gears a little, cable news.

HANNITY: You come to America. I thought you did a lot of things really well. I thought you came out of the box strong. You had two media giants in this country, Oprah Winfrey, Howard Stern, great gets as we say in the business. You were deferential to Larry King. A little bit of bluster when you came out, trying to pick a fight with me.

MORGAN: I did. I tried everything. I tried all my normal British wiles.

HANNITY: And it didn't work. Why do you think CNN is not doing so well?

MORGAN: I think it depends what your yardstick is for success at CNN.  I have quite a big issue really with the constant attention, say, to CNN's ratings, because unlike FOX, which tends to be pretty constant and has an audience that sticks with it day in, day out to hear a particular brand of journalism, which I think FOX, to its credit, does with great confidence and verve and great production values. You don't have to agree with it all, and I don't. I have to watch your show, I want to shout at you myself from my couch.

HANNITY: You do notice that the woman, the second woman saved in Oklahoma was saved because somebody had a gun. But we're not going to turn this into a gun debate.

MORGAN: We can have a gun debate another time. But I think the reality about CNN is it's quite schizophrenic. And when big things happen the ratings are huge at CNN. I would get ratings 10 times the normal ratings for stories like the Boston marathon bombings, and that would last three, four weeks, bin Laden's death, the Arab Spring, and so on. But in the quitter periods the brand is so associated with breaking news that when there wasn't breaking news, and social media now answers that question for most consumers, people don't tune in very much.

HANNITY: You tried to be little different than, say, the other hosts on CNN and give an opinion. By the way, I did think it was a mistake -- I have carried a gun -- and I'm not turning this into a gun debate -- more than half my adult life. I carry a weapon.

MORGAN: Are you carrying now?

HANNITY: Yes, sir. And I have done this -- I have been around weapons. My parents were in law enforcement in a peripheral way since I was a kid. And it would be like me going to Great Britain. And I don't understand your love of the monarchy. And for me to be critical of that is going to the core of a tradition.

MORGAN: Because the monarchy are not going to kill you, right, is the first thing.

HANNITY: It's very American. I thought you never understood it.

MORGAN: I understood it completely. And I've lived in America for much of the last 10 years. Here's my issue, and I'll just answer quickly about guns. The reason it was such a passionate thing for me was when I run a newspaper in Britain, I ran one for Rupert Murdoch as well, your boss here, and I had a great time doing. But in 1996 we had our version of Newtown. Dunblane in Scotland, 16 young kids, five-years-old, killed by a lone gunman.

HANNITY: I understand the arguments.

MORGAN: But here's what happened. It was never a political issue in Britain. Left and right came together and we all campaigned. I drove the paper I was on to do this. We banned all guns, I mean assault weapons, assault rifles, handguns, the lot. There hasn't been a school shooting in Britain since that day. My argument about Sandy Hook is, I think probably the phrase gun control is the problem. How do you make America, which has a massive gun culture, many law-abiding gun owners, how do you make it a safer place given the --

HANNITY: You're doing exactly what I didn't want to do.

MORGAN: How do you make it a safer place?

HANNITY: I will do this. I would love to invite you back.

HANNITY: Because it's something that I can't argue with you quickly.  I hear your side, I just felt you were so passionate and didn't understand what was America's reaction to it.

MORGAN: Can I change my sentence, and then we'll move on? The sentence was simply after Sandy Hook a very similar thing happened in Dunblane. Absolutely nothing changed, and I found that unconscionable. I couldn't understand why you could continue to support law abiding gun owners but at least bring in some measures to stop some crazy kid from walking into Wal-Mart or wherever it may be, grabbing an assault rifle, and shooting up a school. And there have been 70 school shootings, or shootings at schools and colleges, in America since Sandy Hook. I think that is a huge issue.

HANNITY: I'll let you have the last word. Listen, very nice to really meet you.

MORGAN: Good to see you.

HANNITY: Good to see you. Come back again.

MORGAN: I'd love to.

HANNITY: I appreciate it.