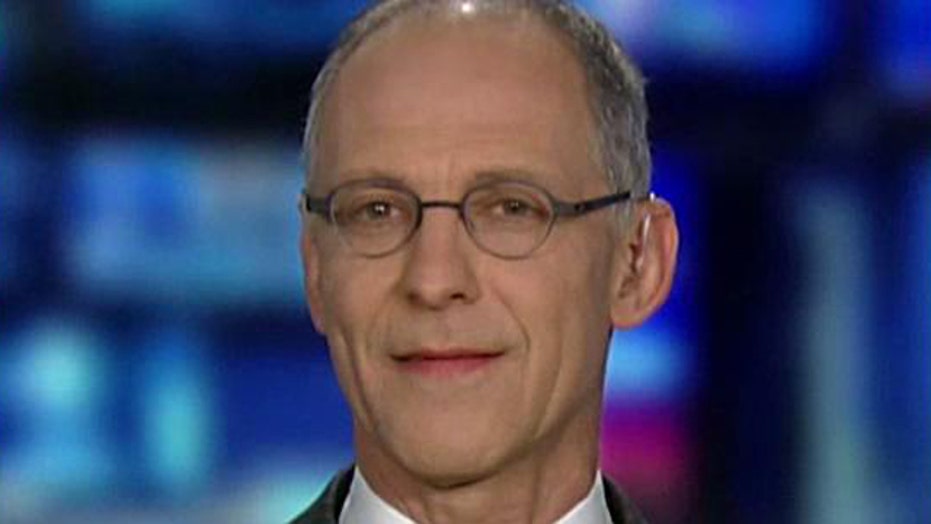 This is a rush transcript from "The Kelly File," October 25, 2013. This copy may not be in its final form and may be updated.

MEGYN KELLY, HOST: "The Kelly File" first now. He is known as one of the architects of President Obama's health care law. And tonight on "The Kelly File," he is here to talk about the rollout of healthcare.gov.

Joining me now, Dr. Ezekiel Emanuel. He is Vice Provost at the University of Pennsylvania. He served a special adviser for the health policy to the director of the White House Office of Management and Budget. And he is the author of the new book, "Brothers Emanuel, A Memoir of an American Family" about to be released in paperback. His brother Rahm Emanuel, now mayor of Chicago and he served as President Obama's chief of staff for years.

Doctor, thank you so much for being here. It's an honor to have you because you are the guy who knows a lot about this law and Americans have a lot of questions about this law tonight.

Let me start with this. As you may have heard me say before you came on, the president made this promise repeatedly. Listen.

KELLY: But so far we are seeing hundreds of thousands of Americans get notices that their insurance has been cancelled, that they are getting kicked off their plans and now we have news of individuals getting letters saying that their doctors will no longer be included in their plans so they will be losing their relationship with their doctors unless they pay out of pocket. So my question is whether you believe the president was intentionally misleading or grossly mistaken?

KELLY: That was foreseeable.

KELLY: I will give you the floor, but that was foreseeable. This was a risk people raised saying in the individual insurance market you're making the insurers provide all these bare minimums on policies like maternity care and so on that will be more costly and that will lead to a rugs in coverage for people who can no longer afford it.

Look, McDonald's was selling a policy to its workers which cost $50 or so a month for about $2,000 of coverage. You go into the emergency room and almost anything you have that's serious, stitches or something, will cost you $2,000. If you need an operation like an appendectomy, it wouldn't cover it. You definitely need to put in --

EMANUEL: Excuse me. Let me finish.

KELLY: I only have a limited time with you. I want these points in. We can have a back and forth on this. I get your point that some of the policies were not good. You think they are now better. We have had people say, look, I liked my plan that wasn't that great, frankly, because I'm in a place where I don't need maternity care. My wife isn't going to get pregnant. I liked that plan, I didn't want it canceled and I feel President Obama broke his promise to me.

EMANUEL: Well, having a minimum floor that doesn't allow insurance companies to sell a plan that doesn't cover things and misrepresents them is very important. That is not the fundamental part of the bill and the fundamental part of the bill is that 34 million people will get coverage. We're going to have cost control. We are going to have an improved quality of the system and those are pretty well built in and, let me say when we were passing the bill, Republicans never had a coherent plan or alternative that did those three things.

EMANUEL: Covered the insured, controlled costs, improved quality. They have never come up with a plan that actually does that.

KELLY: But now we're living with the law that was passed. I understand.

EMANUEL: They carve other people's proposals.

KELLY: Understood. The question is there was never much doubt about whether the people who didn't have insurance would be better off with Obamacare, right? They are. There was a question about whether those who had insurance would be better off with Obamacare. And what we've seen so far -- and this is before the employer mandate kicks in, which could lead to a whole bunch of people getting kicked off of their employer-sponsored health care.

Even today, we are seeing hundreds of thousands if not millions of people are getting kicked off of their insurance plan. Then what option do they have -- to go to the government exchange. They try to get on this disastrous web site. They can't do it. They are about to get fined for not having insurance. They are going to look at the government and say, I had it until Obamacare.

EMANUEL: Let me explain something. When President Bush took office in 2001, 69 percent of the working age public or people who worked had coverage through their employer. Over the course of his presidency it went down to about 60 percent. People were thrown off because health care costs were going up. He had no plan to cover people. Millions of people therefore were losing their coverage, more than 16 million people. The president has given you a plan that will cover everyone. So if your employer decides he can't cover you or won't cover you, you have a safety net where you can get insurance.

KELLY: They didn't want that safety net. They wanted their employer-based insurance.

EMANUEL: I just told you that employers were steadily cutting back on coverage. Almost 10 percent cut back in coverage while President Bush was in office and there was no safety net. People could not afford it. If you had a pre-existing condition, we know insurers gave you a premium so high you couldn't afford it.

KELLY: And the pre-existing condition is praised universally. You need coverage if you have that.

EMANUEL: Ms. Kelly, the only way you could have people guaranteed coverage with a pre-existing condition is if you have a mandate. You cannot design and no expert can design --

KELLY: I get that. I get that. I think the people get it now. Here is a question. Is the mandate working? What we are told now is that the young people you said in your writings and acknowledge are critical to the success of the plan.

KELLY: Are not signing up. They can't get on the web site. They are not signing up. We are seeing that in the state exchanges in particular, and we talked about this earlier, there is a swelling of the Medicaid rolls, people who aren't paying at all. Don't you think the system will collapse unless young people sign up and start paying?

EMANUEL: I don't agree. Let me explain something. The plan to have people go on Medicaid, half of the people who are supposed to be covered under 133 percent of the poverty line, are supposed to get Medicaid. Above 133 percent of the poverty line are going to shop in the exchange. I agree with you, the rollout of the exchange at the federal level was disappointing. The roll out in California, Connecticut, Kentucky, D.C. and New York were actually good. Many people are covered through there.

Now you don't examine how is it going now five weeks into it, is that enough? The fact is by March 31, that's when we have to ask how many people have been covered. We have a clear standard. Are we going to get 7 million people covered or not. That's what is expected.

KELLY: We are not anywhere near on track for that.

EMANUEL: Ms. Kelly, as I have repeatedly said, whatever the number is today is totally irrelevant. People are not going to buy until round about Thanksgiving.

EMANUEL: For a January 1 start.

KELLY: Understood, OK. I get your point. Here is my last question.

EMANUEL: You are claiming we are not on track. You have no idea.

KELLY: I wish I could know for sure, but Kathleen Sebelius won't tell me.

KELLY: That's for the American people to decide.

KELLY: If it's so meaningless why not give out the number?

EMANUEL: Just as you have made a mistaken assertion --

KELLY: Let me ask you this question -- I want to get your response. You have said the roll out was riddled with problems. It's been a fiasco. It's been disappointing that the administration lost the public trust. Should someone be held accountable for that and, if so, who?

EMANUEL: Look, what we need to do is to get the exchanges up and running.

KELLY: I know. Should someone be held accountable?

EMANUEL: The president has done a good job putting in charge Jeff Ziens, who has a lot of managerial experience, knowledge of the health care industry.

KELLY: That's the fix. Should somebody be held accountable?

EMANUEL: I think that's the most important thing. The president has to decide who his advisers are. That's not my decision. He has to decide that.

KELLY: I know that. But you're one of the architects of the law. You must be frustrated to see it falling apart in the roll out. Should somebody be held accountable for hundreds of millions of dollars we have wasted on a web site that doesn't work?

EMANUEL: The web site is going to work. It's just a matter of time. This is not reinventing the wheel. This is fixing problems, blocking and tackling.

KELLY: So no. That loss of the public trust in the president's signature health care -- his signature achievement, no one needs to be held accountable for that?

EMANUEL: I think it's very frustrating and I think it should have been rolled out better. I am just as frustrated as everyone in the public. I think we should get it right. That's the most important thing to do now.

But listen, Doctor, you're an interesting guy. I have read a lot of what you have written. It's worth the time. I appreciate you coming on.

EMANUEL: I appreciate that. Next time I come on, I would like the time to give an answer complete. Thank you.

KELLY: We gave you 8 minutes. Do you know how long that is in TV time? That's a long time. Had a lot of ground to cover. I would love to give you the chance.