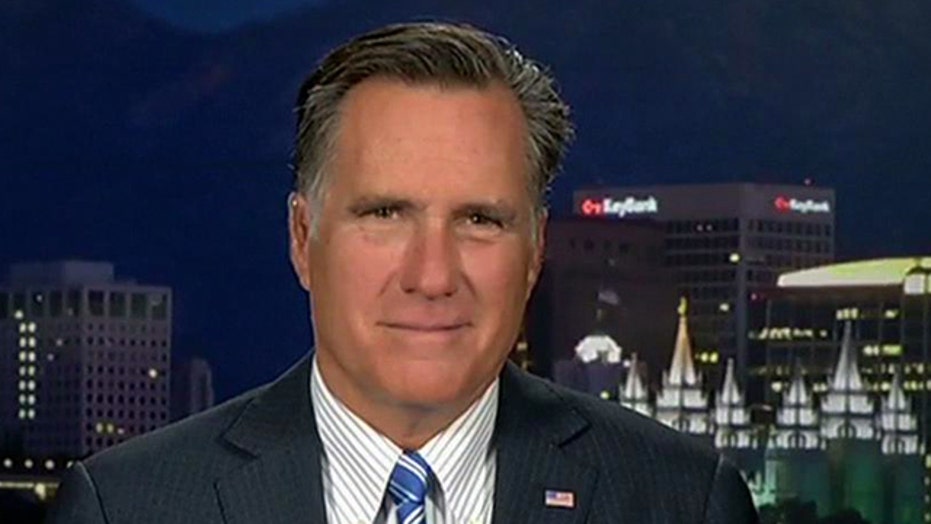 Exclusive: Mitt Romney previews the State of the Union

Romney urges the president to find 'common ground' with Republicans

This is a rush transcript from "Hannity," January 27, 2014. This copy may not be in its final form and may be updated.

SEAN HANNITY, HOST: Joining me now is the man that, frankly, I wish was giving tomorrow's the State of the Union address. Former presidential candidate Governor Mitt Romney is back with us. Governor, good to see you.

MITT ROMNEY, FORMER GOVERNOR AND PRESIDENTIAL CANDIDATE: Thanks, Sean. Good to be back with you again.

HANNITY: All right, you heard Ed's report. Sounds a little confrontational to me. And the president will use unilateral executive action. He's done that before, not enforcing immunity law, changing the Obama Care law itself, recess appointments when they're not in recess.

You think that's a good strategy?

ROMNEY: Well, I guess he's trying very hard to get something done. He really didn't have an agenda for his second term and he's groping to find one and to try and show some degree of progress on some kind of an agenda.

You're not accomplishing a real legacy as a president unless you can work with people in both parties, knock some heads together if they have to be knocked together, or work on a more collaborative basis, but solve the problems we have. Immigration is one of them. Work together with Republicans to come up with something which can be acceptable by people in both parties.

HANNITY: You know, Governor, think about this. I mean, it's just really a little over a year later, and we're now at a point where 63 percent of Americans are not confident that he can make the right decision for the country. And more importantly, most Americans do not see him as honest and trustworthy.

Those numbers did not exist when you were running against him in 2012. Why do you think it's changed so dramatically just in a little over a year?

ROMNEY: Well, actually, just during the election month or so, there was a sense that somehow, the economy had turned around, everything was getting better in a big hurry. And so people felt very positive about what was happening in the country.

In the year that's followed, we've realized the economy really did not turn around as people had hoped for. And at the same time, I think the revelation that the president's campaign promise, that if you like your health insurance, you can keep it -- when they found that that was not true, that the president had been dishonest on that point, the American people, I think, saw him in a very different light.

And there's very -- it's a very difficult thing to try and reestablish a reputation for integrity and honesty if you've lost it in such a dramatic way as those promises demonstrated.

HANNITY: You had a unique perspective running against him that I guess only John McCain had had before you. But you got to spend more time with him and see him up close and personal. I had made -- I had made -- my impression early on that he was a rigid ideologue remains today, which is why it -- maybe he doesn't have the instincts of Bill Clinton to pivot, to switch, to admit he's wrong and to try something new and different.

When you were with him alone personally, when you saw him up close, what did you see?

ROMNEY: Well, you know, I'm not going to describe what he said to me. But we had a meeting together in the White House after the election, and I laid out the things that I thought were important for the country and for him.

My own view is that, look, this guy is the president of the greatest country on Earth at a time when America is sliding internationally, sliding economically, where people are hurting, where there are more poor in this country, the number of people on food stamps has exploded, the number of people in the middle class that are having a hard time making ends meet -- all these things are happening under his watch.

HANNITY: You know, it's interesting. You made some comments that made a lot of news comparing him to Putin over the weekend. What did you mean by that?

ROMNEY: Well, what I said was that with regards to Syria, Putin has out-maneuvered President Obama. Look, on the international areas, Putin has not only dealt with Syria in a way that made the president take second fiddle, but the new START treaty is also an enormous win for Russia. Under the new START treaty that the president signed and heralded, Russia ends up with two to three times as many nuclear warheads as we have. I mean, the president, I think, has been out-maneuvered on the world stage by President Putin.

ROMNEY: But by the way, President Putin is a terrible president. He's a thug. He's killed, from what we can tell -- I don't know that I want to accuse him of killing, but there have been members of the media that have disappeared and opposition voices that disappear, been put in jail, and so forth. This -- this is not a good guy. Our president is a lot better president than President Putin, but it breaks my heart to watch President Putin out-maneuver him on the world stage.

It's funny. A lot of people wrote me over the weekend, because they released this movie. You were followed for a considerable period of time, you and your family, throughout the campaign. And more than a few people said, "Why didn't we see this side of Mitt Romney before the election?"

I want to play a small part of it, and this is the -- when you got news that you weren't going to be the next president. And everyone had the same feeling, would you have won had people been able to see maybe another side of you? Let me air this for you.

UNIDENTIFIED MALE: I just can't believe you're going to lose.

So what do you think you say in a concession speech?

By the way, someone have a number for the president?

HANNITY: You know, "Does anybody have the number for the president?" But that also shows you with your family in the snow, rolling around, and the boys and the fun and the -- you know, all these different things. Is it hard during a campaign to maybe show that side of yourself because of the environment that you're in?

ROMNEY: Well, you know, there's no question but that we failed as a campaign to do that as effectively as we'd have liked to have. We had at the convention, for instance, a 10-minute film that showed me with my family, many of the kinds of clips that, frankly, made it into the movie. And of course, there were people in the convention that stepped forward and talked about our relationship in the past.

But you know, not a lot of people watch conventions. In this case, for instance, the networks decided to cut back on the coverage of conventions, so people didn't see the film, didn't see those testimonials. It's getting harder and harder I think, to see behind the -- if you will, just the debates and to see behind the attacks of various campaigns to see who the person really is.

ROMNEY: And frankly, I wish we would have done a better job at that. And I hope that the next guy or gal coming along in our party is able to find a way to communicate who they are so the American people are not going to be led astray by the mischaracterizations that are often part of the campaign strategy of the opposition.

HANNITY: All right, one funny thing. I saw you on Jimmy Fallon's show doing a slow jam with Jimmy Fallon. I'm going to play it and get your reaction to this.

JIMMY FALLON, HOST: You keep talking like that and people are going to start thinking you're running for president again.

ROMNEY: Jimmy, I'm not running again. There are a lot of great candidates for 2016, and I'll be supporting the Republican nominee 100 percent.

ROMNEY: That's a low blow, but it's pretty funny.

ROMNEY: I sure do. I must admit, over the last few years, it has been an absolute thrill to sit down with Jay Leno, also with Dave Letterman a couple of times. Jimmy Fallon is a very funny guy and really easy to be interviewed by. I'm going to miss Jay Leno, I got to tell you, though. He's been a remarkable friend, and I don't know what his politics are, but just a really good guy.

So that's part of the fun of running for president. You get to meet some of these extraordinarily famous people, see how tall they are, see what they're like in real life. I've met you, for instance. We spent time together. That's a lot of fun.

HANNITY: Well, you know what? It just shows another side. I'm with you, though. I'm a big Leno fan. I wish he wasn't leaving late night, although, you know, Fallon's really good. I just -- I like Leno the best. He was my favorite, so.

Governor, I wish you were giving that speech tomorrow night. But I'm going to be there and I'll suffer through it and report on it on Wednesday night. Thanks so much for being back with us. And hopefully, we'll see you soon.

ROMNEY: Thanks so much. Great to be with you.