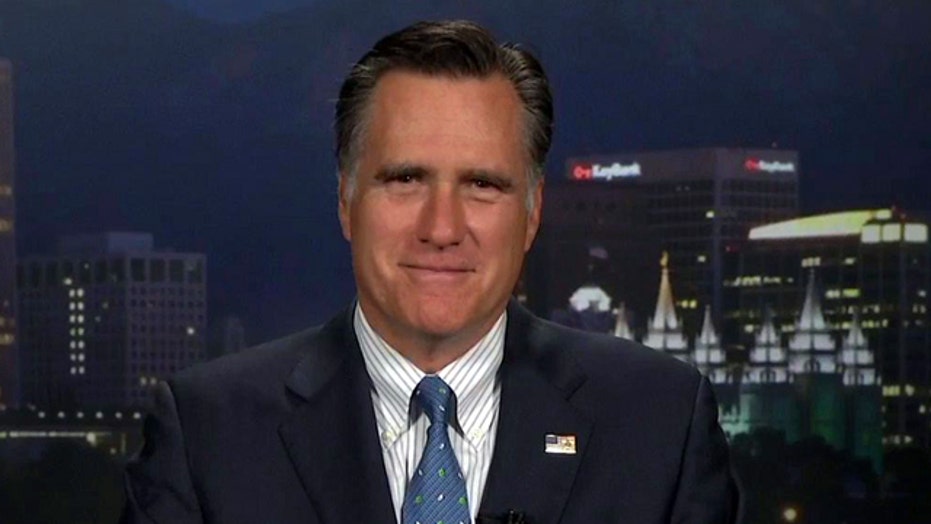 Exclusive: Mitt Romney on how he would reopen the gov't

This is a rush transcript from "Hannity," October 8, 2013. This copy may not be in its final form and may be updated.

MITT ROMNEY, FORMER REPUBLICAN PRESIDENTIAL NOMINEE: We know that if the president were reelected he would still be able to not work with members of Congress. He has ignored them, he's attacked them, he's blamed them. And of course, the debt ceiling will come up again, and then there will be a threat of shutdown or default. And that, of course, chills the economy, puts more people out of work. The president was right when he said he can't change Washington from the inside.

SEAN HANNITY, HOST: Wow, that prophetic warning was issued in 2012 by then presidential candidate Mitt Romney, and now less than one year later, surprise, surprise, Obama won't negotiate. The government is shut down, our tax and spend president is about to call on our Congress to once again raise the debt ceiling.

Here for an exclusive interview to explain why he sounded the alarm about the dangers of Obama's second term, the man himself, former Massachusetts governor and presidential candidate Mitt Romney. Governor, how are you? I have not interviewed you since the election. Welcome back.

ROMNEY: Thanks, Sean, good to be with you again.

HANNITY: How are you and your family doing? I am sure it is not an easy thing to go through. You spend two years of your life out on the campaign trail and you're that close. How hard is it?

ROMNEY: Well, Sean, it is nice to get back to real living and normal life. But I can also tell you that running for president is a fabulous experience, the people you meet, the character of the country you come to know in a very fundamental way is something I will never forget. By the way, if anybody who is watching gets a chance to run for president, do it. It's a great experience.

HANNITY: Are you encouraging me to run, governor, because I don't think I'm going to run.

HANNITY: I might get three votes, maybe four if I was lucky. Well, everything you said there has now come to pass. Is there anybody in the part of you that wants to say, I told you so?

ROMNEY: Look, I don't want to look backward, of course. What we want to do is find the best way to get this country working again and putting more people to work. My concern was that the president in his first term pushed through things on a partisan basis, was unable to work across the aisle, and then spent the last two years of his first term attacking Republicans in Congress and showing an unwillingness to reach across the aisle.

And frankly, you can't get things done in a bipartisan nature where you have three branches of government unless all three branches are willing to work with each other. And this president has not shown that inclination, frankly, since he has been in office. And the country is in the balance. The government is shut down, the debt limit issue -- these are real concerns that will affect a lot of people. And the president has got to engage and work in the job of governing, not just campaigning and posturing, but governing and working with people that agree with him and disagree with him.

ROMNEY: Well, I don't think the American people can understand how the person who is to lead the country would possibly take a position saying I'm not willing to talk. I'm not willing to look for common ground. That is just not realistic.

Look, this is not the first time that the country has had a government shutdown. During the Reagan years government shut down eight different times under a Democrat Congress. The president and Congress worked together and got things straightened out. Under the Carter years, again, a Democrat Congress, the government shut down five times. Look, this is not the first time this has happened. But what seems unusual here is you don't have a president willing to engage and work with other people across the aisle as opposed to making bold statements to the public and campaigning for his posture. And right now I think the American people don't care so much about who is right. They just want to get this behind them and get this economy going again.

HANNITY: The president actually suggested that raising the debt ceiling does not necessarily increase our debt. I was not a math major, but every time we raise the debt ceiling we ended up spending that money and increasing our debt. I can't think of a time that it worked the other way. Do we have to stop borrowing this kind of money?

ROMNEY: Well, what we have to do is begin to work to rein the long-

term crisis that we can see in the highlights ahead, which is what occurs when the entitlements that we have and aging population encounter the spending limits, which, of course, have to exist. At some point you have got to say, look, we have got to rein in our spending and put in place a series of reforms that ensure that America's future will be prosperous.

And that is what Republicans are asking the president to do with this debt limit discussion, which is, look, can't we agree to make some progress, some modest progress near-term, long-term to address this growing debt crisis and to make sure that we don't have the kind of cataclysmic outcome that could occur if we were never to take any action at all.

ROMNEY: Well, look, I'm not running again. We have some very good people who will be running for office in 2016, and I'll be supporting our nominee. That is not because I didn't enjoy the process. Look, I loved running for president. It was a fabulous experience. I can't tell you how wonderful it was. It was just great.

But did I learn from the process and are there things I would do differently? Of course. I made a number of mistakes personally and things that I said. I wish I could fix those and go back and relive history, but that is not going to happen.

But I think also, particularly with regards to the Hispanic voters, we just didn't make as an effective an outreach that we needed to make sure that Hispanic voters understood that my campaign and our party is devoted to helping them have a bright and prosperous future by building a strong economy with more jobs and rising incomes. People come to this country from all over the world because it's the land of opportunity and that is slipping away under this president. And I did not make that message as clear as I should have during my campaign.

HANNITY: After four separate proposals under the House, defund, delay, eliminate exemptions and then just conference, do you think they're doing the right thing by just holding the line now when the president won't talk?

ROMNEY: Look, I'm with the Republicans that want to make sure we finally address the spending crisis that's ahead and that we see all around us. We have to get this country going again. I want to see America succeed. It means Republicans and Democrats and the president have got to sit down and discuss the future and make progress. That is what the American people want.

HANNITY: Governor, I think we would have been a lot better off if you were elected, a lot better off. Thank you so much for being with us. Good to see you again, all my best to your family.

ROMNEY: Thanks, Sean, good to see you.