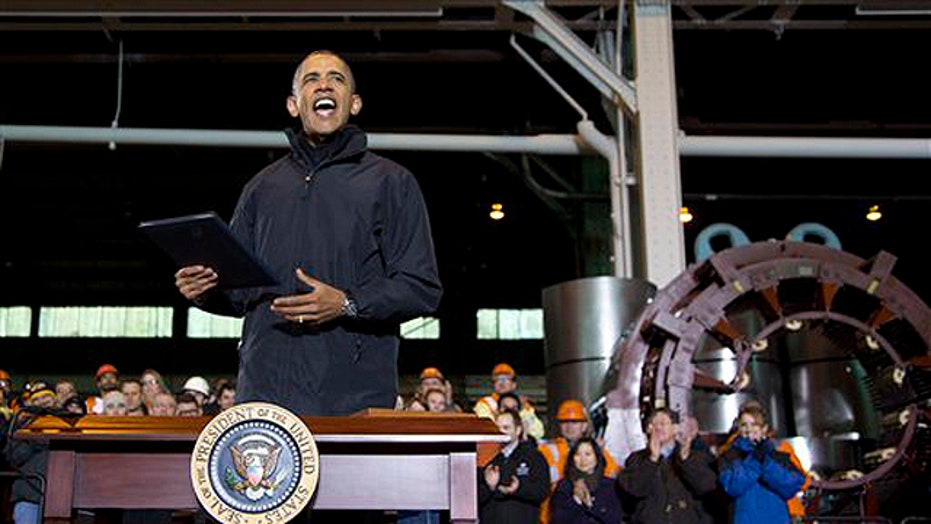 This is a rush transcript from "The Kelly File," January 29, 2014. This copy may not be in its final form and may be updated.

MEGYN KELLY, HOST: With the Democratic Party facing potential trouble in the midterm elections and with the president down in the polls, there are new reports that the administration is quietly doubling down on the effort that silenced some conservative groups in the run-up to President Obama's re- election. We have been tracking these stories over the last six months, starting with the IRS scandal last summer right through news this week that the DOJ is prosecuting a conservative filmmaker for allegedly making illegal campaign donations. And now reports of an effort to push back.

Joining me now, Republican Senate Minority Leader Mitch McConnell. Sir, it's great to see you here tonight. And so you are getting ready to announce a major pushback on the IRS which has been doing what, while we've not exactly been paying attention to it in recent weeks.

SEN. MITCH MCCONNELL, R-KY., SENATE MINORITY LEADER: Yes. Well, while they're not seriously investigating the IRS scandal that I first spoke out about back there in the 2012 campaign, Megyn, they're now initiating a new rule through the Treasury Department in the IRS to quiet the voices of outside groups. It is called a C4, and what they're going to do is redefine what outside groups can do in a way to silence the voices of conservative critics. A new regulation by the administration.

You know how the president has been using regulations to get around Congress? They tried to do this through legislation back when they controlled both the House and the Senate and it did not pass. So now you're looking at an administration trying to silence the voices of their critics going into this important fall election, by using these Treasury Department regulations.

So they're basically going to try to change the rules about what these groups can do.

MCCONNELL: You got it.

KELLY: And how they qualify for this, you know, sort of tax-exempt status in the first place.

KELLY: But they say it is not just conservatives who will be, you know, punished, affected, whatever your word is. Liberal groups will also be affected. So why do you think it is about silencing conservatives?

MCCONNELL: Well, I don't think the voices of either the Liberals or the conservatives ought to be silenced by the government. I don't think it is the government's business to tell these groups they can't speak. So, it is not convincing to me that it would fall on both sides.

We do know, however, that this particular tax exempt category is the same category that they were targeting conservative groups back during the 2012 campaign. So now I think what they have decided to do is to take these people off the playing field, and if it hits a few liberals, fine, but I think what they're really worried about are their conservative critics.

KELLY: Because -- let me just set the stage for the viewers. Because it came out that the IRS was targeting conservatives, and both parties said that is awful, that's terrible, we need to investigate. And shortly thereafter, the focusing turn for some to, "You know, what? These groups should have been granted 501-3 status in the first place. They shouldn't even be applying for tax-exempt status because they're too political." That is what the Democrats started to say. And what you're basically telling me is that now the IRS, all of these months later has said, "You're right, let's change the rules so that they wouldn't have to deal with it at all because we're just going to stamp 'rejected' as soon as they submit their application this time."

MCCONNELL: Will he throw the IRS right in the middle of this big political debate? I want to see a statesman over there at the IRS. He got recently confirmed by the Senate. I had a conversation with him about this subject. We're counting on him not to be used by this White House to carry out their political agenda of quieting their critics.