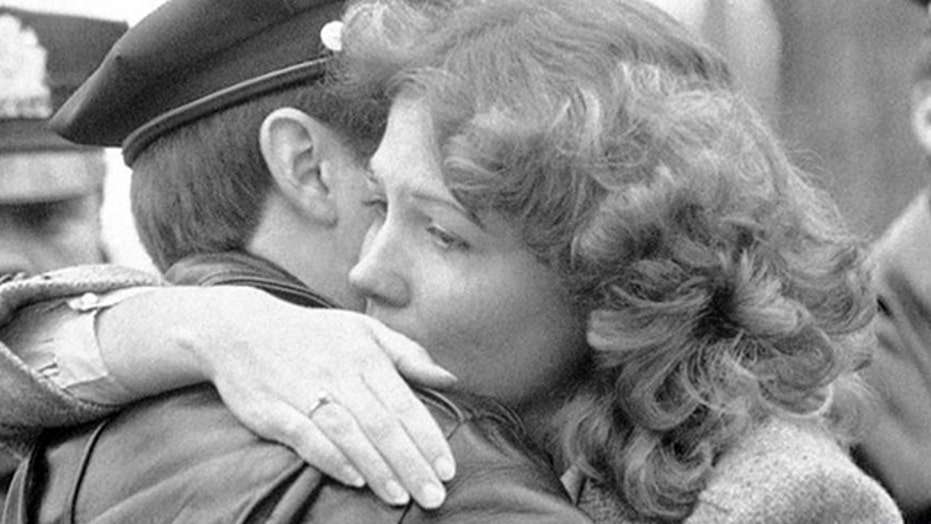 This is a rush transcript from "The Kelly File," March 5, 2014. This copy may not be in its final form and may be updated.

MARTHA MACCALLUM, GUEST HOST: Back now to our top story tonight. As a bipartisan group of senators shoot down the nomination of this man today, Debo Adegbile, for a top spot of the DOJ. Many those senators said that a vote to support a man who once defended the cop killer who gun down Philadelphia police officer Daniel Faulkner back in 1981 was something they simply could not do. Faulkner was shot in the back, and then in the end, in the face as the killer stood over him. But there was one person who opposed that nomination more than most. And today, Officer Faulkner's widow offered an exclusive reaction to us for the vote that she says today left her in tears.

MAUREEN FAULKNER, DANIEL FAULKNER WIFE: I must say I broke down in tears when I saw that Adegbile was blocked from the Department of Justice, because I just feel as though he is not the man for this position. So, I just have gratitude for the senators that were brave enough to vote and do the right thing.

I feel as though -- sometimes I feel as though Danny is looking down upon me through all of this giving me the strength to speak out, not just for him and his brutal murder of what happened, but, also for all police officers throughout the country. That we must be united and stand up for them, and respect them for what they do in this country. So, I do believe he gives me the strength and I think he would be proud of me today.

MACCALLUM: No doubt he would be proud of her today. Because what we're hearing from the Hill is that she really is the person who turned the tide on Capitol Hill by all of the pleading and discussing and sending information to these senators, so that they could not say they didn't know what happened. She not only found support in the Senate today but also from thousands of law enforcement officers who said that this nomination would be "just a thumb in the eye to all of them."

Richard Costello is the political director for the Philadelphia Fraternal Order of Police. He was a police officer himself back in the years when Daniel Faulkner was gunned down. He himself, Mr. Costello, took two shots in the line of fire himself. Sir, welcome. It is good to have you with us tonight. Thank you so much for being with us.

MACCALLUM: You know we're honored to have you. I wonder what your reaction is when you listen to Maureen Faulkner and you know all of the years of anguish that she has gone through, and she finally got this decision today. What do you think?

CASTELLO: Well, this whole case has been a circus of evil like a carnival over the bizarre. For over 30 years now we have been forced to endure every left wing hate group in America championing the cold-blooded killer of a Philadelphia police officer as some type of twisted political hero. Maureen herself has been trapped in a time warp of heartache, and even though it is 2014, she has never been allowed to leave December of 1981. It has been cruel, it's been heartless, and it needs to end.

MACCALLUM: I mean, I can't even imagine what she been through. Her young husband -- they were in the beginning of their life together. And then his gunned down by this man and then this man become a cause celeb, even though his convicted cop killer. And then years later, she finds one of the man who took it on himself really, he volunteered to take this on. You know, there was plenty of representation for Lumia. He decides to get involve to it and he almost get one of the top jobs in the DOJ. I mean, you're right. It's a cruel circus as you put it. What do you think about the fact the president today was really shocked by this outcome in the Senate. He said this is an absolute travesty.

CASTELLO: The senator from the great state of West Virginia indicated that after he spoke with Maureen Faulkner, he was voting his conscience. If President Obama thinks that voting your conscience is a travesty, then I submit that the true travesty is sitting in the White House.

MACCALLUM: Richard, obviously -- you know, this has been a very emotional ride on all sides here. And when you look back at it, I want to go back to something that I just talked about, because there's been -- you know, something put out there that Mr. Adegbile, you know was just doing his job, that he was an attorney he was asked to represent someone and that's what he did. But that not exactly how it went, is it?

CASTELLO: The chronology makes them a liar. The murder that occurred in 1981, he did not come aboard and took a 2009, 27 years later. So, he wasn't defending anybody, he was using the case as an excuse to launch an attack on the entire criminal justice system and champion a killer as some type of twisted hero.

MACCALLUM: This is a cause celeb, as I said. So, getting involved in it sort of -- you know, might have been a career booster for him, right?

CASTELLO: He seemed to thank that and it has a career booster for others. As I say, this case is a nightmare in that a killer has been championed as a hero.

MACCALLUM: Richard, thank you very much. We know it's a good day for all of you and we'll see what happens because there's a possibility of the recess appointment here, and we'll stay on it. We thank you so much for being here tonight.