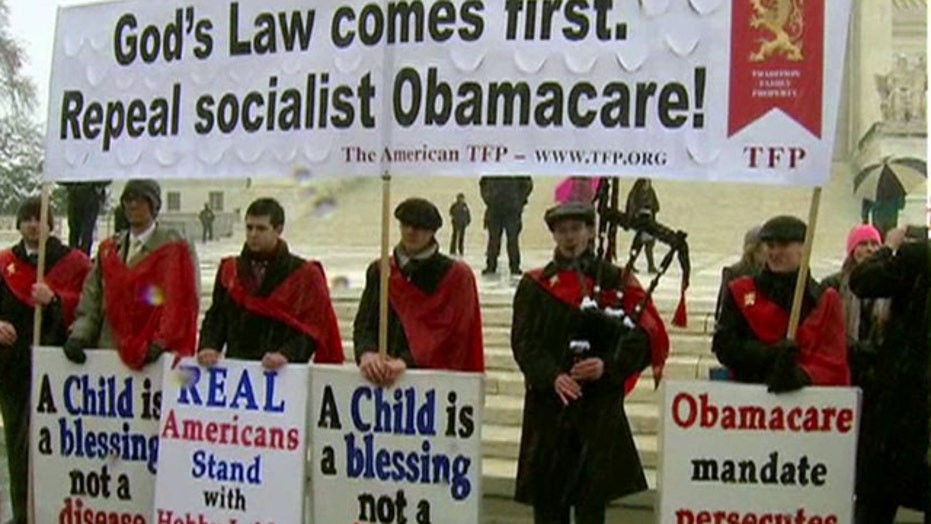 This is a rush transcript from "The Kelly File," March 25, 2014. This copy may not be in its final form and may be updated.

Mark, good to see you again.

KELLY: What a day for you guys at the Supreme Court. It was a tight argument, the court watchers predicted it could have gone either -- it could still go either way. And it all comes down to Justice Kennedy.

Let me ask you this, he asked among other things today, what rights would women have if you get your way, and Hobby Lobby and other employers get this exemption from having to provide certain kinds of contraceptions to their employees. He says, what rights would women have if their employers ordered them for example to wear burqas -- a full length robe that you know, is commonly worn by Islamic women. He was suggesting this could go anywhere in terms of those who have religious beliefs, imposing them in his view on the employees.

RIENZI: Actually, I don't think Justice Kennedy was pushing in that direction, he said, that's not this case. And the truth is, the law, the religious freedom restoration act calls for a balance. The government's problem here is that it doesn't have a very strong interest in forcing the Green family or the Hahn Family to pay for these drugs when as you previous correspondence have said, the government has made exceptions so the tens of millions of people aren't insurance plans, aren't covered by this mandate. There are simply no reason for the government to force these families to be involved if they don't want to. There are plenty of other ways to get people drugs without dragging these people into it.

KELLY: The National Organization of Women came out today and said, this is outrageous, they said that basically what is happening here is Hobby Lobby doesn't want to provide American female workers with any birth control. Your thoughts?

RIENZI: It's not true, first of all. Hobby Lobby provides all sorts of standard birth control, it's just a small handful of drugs and devices that can cause early abortions that Hobby Lobby doesn't want to provide.

KELLY: So, it's four contraceptions out of 20. Just to get the numbers right, correct? They object to four. Sixteen forms of birth control, Hobby Lobby is fine with his insurance company providing that to the female workers?

RIENZI: That's right. And Hobby Lobby is a company that does a wonderful job taking care of its employees. It pays them starting salaries roughly twice the minimum wage. It provides excellent health benefits. There's just a small sliver of things that this family cannot do. And the governments view, is that Hobby Lobby should be crushed with fines or it should be forced to kick all of its employees off insurance. That's not helpful to the women who worked at Hobby Lobby or their families or anybody else.

KELLY: The government seemed to be arguing that today. Why didn't just pay the fine? Kick them off the insurance, lets them pay the fine, and that will be the end of it.

RIENZI: Yes. Pretty remarkable that a few years after this law is passed, that's the government's position is, OK, go ahead kick everybody off insurance and that will be good for people. It's really a silly argument the government's presenting. It's not good for companies to kick everybody off insurance. Offering good insurance is part of attracting and retaining workers. And Hobby Lobby's employees have a religious belief that they need to take care of their employees. So, they do that. They do it very well.

And the government shouldn't be trying to say just because they earn money they give up their religious freedom. And even Justice Kagan and Justice Breyer, justices who might be thought of as, you know, likely to side with the administration, came out and sounded like they didn't buy the government's argument. Just because you make money, you can't exercise religion.

KELLY: They did press your side on whether this was a slippery slope. So, if Hobby Lobby can say no to those four drugs through its insurance companies to the women, then who's next? Can some employer come out and say, well, I have an objection to medical vaccinations, so I'm not going to pay for those. And somebody else comes out and says, well, I have an objection to blood transfusions, so I'm not going to allow those. And can we run the law this way, piecemeal with employers coming out and saying, I have this one, and I have that one.

RIENZI: Well, it's not a slippery slope. And it's not going to be a slippery slope. For all of American history, until 2012, any employer who objected to covering vaccines could have objected. And anyone who didn't want to cover blood transfusions, could have objected. You never heard of any cases like that, I never heard of any cases like that. Because that's not actually a real religious objection that anyone has.

But if somebody ever does, this law has a balancing test. And I assume the government would be able to come in and show that it's got a compelling interest in getting everybody vaccinated.

RIENZI: Here, the government's problem is they created so many exceptions for this contraceptive mandate. Because they know there are other ways to get people the drugs --

RIENZI: -- and the government doesn't care how they get it.

KELLY: Except they argue that they can't even fathom an exception.

Mark, I got to run, thank you.