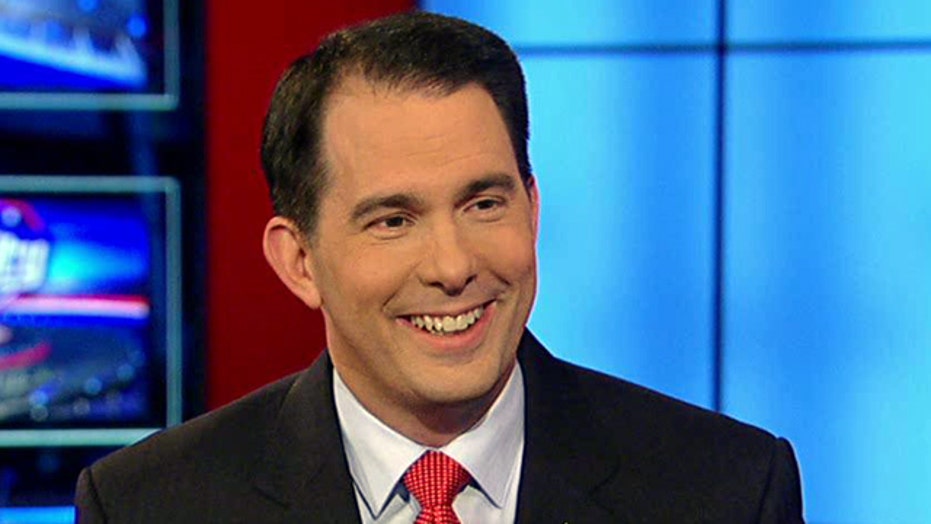 This is a rush transcript from "Hannity," November 18, 2013. This copy may not be in its final form and may be updated.

SEAN HANNITY, HOST: The Wall Street Journal is reporting that a special prosecutor has been hired to target conservative groups that were involved in Wisconsin governor Scott Walker's recall election. Now, the prosecutor has hit dozens of organizations with subpoenas, demanding communication and donor information from 2011 and 2012 as part of an investigation into possible campaign coordination violations.Now, this is the second probe into Scott Walker's finances, and it comes as the governor's 2014 re-election campaign approaches.

So is this yet another example of what happens when you dare the disagree with the left's radical ideology?

Here to discuss this and much more, the man himself, author of the brand-new book "Unintimidated: A Governor's Story and a Nation's Challenge," Wisconsin Governor Scott Walker.

How are you, Governor? Good to see you.

HANNITY: Good to have you. Sorry about the Packers this weekend.

WALKER: Oh! I was at the game! Actually, Chris Christie and I were there together.

WALKER: He was a gracious host, considering he's a Cowboys fan and not -- not...

HANNITY: Yes, that's true, right? And they are the New York Giants, not the...

WALKER: They play in Jersey, but...

HANNITY: Yes. Does this mean a lot to you? Does this sound like what they did to Tea Party groups et cetera, conservative groups?

WALKER: You know, I don't know. I mean, most of this was the first time I read about it on Saturday over the weekend, although it's never dull in Wisconsin, as you know, particularly around election time. And so we'll leave it up to the people who have the insights on that to speculate. But it never is dull in Wisconsin, that's for sure.

HANNITY: Well, boy, you seem to be in a perpetual election cycle because you had the election, then the recall, now you're up for reelection again.

WALKER: In fact, next year will be my third time in four years. I'm getting pretty good at it.

HANNITY: Yes, well, congratulations, I think -- difficult thing. Why can't -- why isn't Wisconsin in play for Republicans? You look at Michigan, Wisconsin, Minnesota. You know, there's always the thought that we might be able to get those states. We can win the governor's race, but we can't win the national election there. Why?

WALKER: In 2000, 2004, we were one of the closest blue states in America in terms of the -- President Bush's election and then reelection. So we're still very competitive, and we supposedly were competitive last time.

I won by about 7.5 points in June of last year. Mitt Romney lost by about seven points. I think the key difference was, and I said it -- actually, I said it on your show I think shortly after my recall election -- that Mitt needed to show that the R next to his name didn't just stand for Republican, it stood for reformer.

For whatever reason, the folks that were advising him thought that it all had to be a referendum on Barack Obama, and in the end, they didn't make the case as to what an America would be like under President Mitt Romney, and I think, instead, the Obama campaign was successful in defining that R next to his name as being -- R stands for rich guy who cares about rich guys, which obviously wasn't the case with Mitt Romney.

HANNITY: Well, Democrats will always do that. They're always going to play the race card every election, class warfare, scare old people, you know, say that Republicans want dirty air and water. And to a certain extent, I think the reason they play that card is because it works, right?

WALKER: Well, but also because we sometimes create a void. In my book, I lay out some real optimism at the beginning of the book where I talk about despite what happened in the presidential election, there are 30 states in America that now have Republican governors. There's almost as many states have Republican legislative majorities. That's where real reforms are at.

What's the difference between that and what's happened the last two cycles on our presidential ticket? We've got an optimistic vision. We lay it out in real terms that are relevant to people, and then we show the courage to act on it.

And we can do that not only in Wisconsin, but Iowa, Michigan, Ohio, you go down the line, all those states we talked about, throwing Nevada, New Mexico, Florida -- all have Republican governors in place, even though they were carried by Barack Obama.

HANNITY: So you're saying the mistake of the Republican Party is they need to offer solutions. Have you -- do you think on every other level they've failed that? Because actually, I agree with you. I'm putting together a piece for 2014. And in the piece, I'm just laying out what the solutions are. For example, what would your solution be on health care? If you could -- if you had the ability, you were president, you could repeal ObamaCare, what...

WALKER: It's a free market solution where you don't have it dependent on not only the federal government, not even the state government. You and I and our family should make decisions ourselves, give everybody the same tax incentive whether you buy it through a health savings account, whether you buy it through your employer or you buy it yourself. Everyone should have the same tax incentive out there because then, as consumers of health care, we'd be involved in it. That's how you truly manage cost, not in the extreme (INAUDIBLE) which is the government will play a more active role in the future.

HANNITY: What do you do for people that have pre-existing conditions and may lose insurance? Can you...

WALKER: ... I think over state lines. All those things can play into that. But you don't need the state exchanges, you don't need a federal exchange. You don't need all these other things. But I do think, to your point -- and again, it's one of the things I highlight in the book is, in the states, we're offering real solutions to real people's problems. We're talking about it in ways that are relevant, not just in sequesters or fiscal cliffs, but how to fix schools, how to help businesses grow and do things...

HANNITY: When I interviewed you during the time of the recall, what was the estimated costs, when you came into office, for deficit?

HANNITY: And you had a surplus the year of...

WALKER: We just finished with a $760 million surplus.

WALKER: In fact, this December, we'll have a third year in a row that property taxes go down because we reinvested another $100 million in the property tax (INAUDIBLE). We're showing in the states -- not just in my state but across America, we're showing that Republican leaders in the states are getting things done. We should make that same case.

One of the frustrating things Terry Branstad from Iowa and I talked about with the Romney campaign last year was that campaign would come into states like ours, where we just spent millions of dollars telling people, "Hey, you know what? Things are getting better." And then the Romney campaign would come in and tell them, "Hey, you know what? Things are not getting better."

The difference is, we should have said in those states where Republican governors had been elected in 2010, "Hey, you know what? Remember how bad things were before? Remember how much better they've gotten in the last year-and-a-half? How much better could they get in America if we had a Republican chief executive?"

HANNITY: If we did one thing, if we would just use our own energy resources, we could save the country in record time.

WALKER: Well, plus, the jobs are related to that. North America independent on energy is another great example. We're not only helping in terms of energy supply in and of itself, all the jobs, all the new technology, all the innovation involved with it -- there's just so many examples like that across the board.

HANNITY: You running for president?

HANNITY: I didn't ask you that!

WALKER: I'd love to be president...

HANNITY: Would you consider...

WALKER: ... of the Harley-Davidson Motor Company.

WALKER: My wife would love it, make a lot more money.

HANNITY: Do you ride a Harley?

HANNITY: All right, would you...

HANNITY: My wife won't let me get one. It's unbelievable!

HANNITY: Wear your helmet and don't drink and it's a perfect (INAUDIBLE)-- my wife said that's all I need to do to ride.

HANNITY: OK, let her talk to my wife.

WALKER: I had to work pretty hard the last two-and-a-half years to be -- to be governor, not once but twice. And I think for the future of my state, I really need to focus on being governor, not just for my own sake and politically, but for the next...

HANNITY: Would you rather see a governor running versus a senator?

WALKER: Oh, that -- hands down. I mean, there's a lot of good people in Congress and a lot of people I admire and respect in the Senate and House, but I think a governor, particularly an outsider coming into Washington, shaking things up...

HANNITY: Can Chris Christie, who is from New Jersey -- his issues on immigration, et cetera. Would he have a hard time in red states?

HANNITY: All right. But you're more inclined for a governor not a senator.

HANNITY: ... congressman by the name of Paul Ryan.

HANNITY: You're getting defensive. I'm not trying to...

WALKER: No, no. I love Paul. I'd be the leader of his fan club if he had an official Paul Ryan fan club, I'd be the president. But in the end, people, I think, historically, want executives to be the chief executive. And on top of that, I think to beat Hillary Clinton in the next election, we got to have somebody from the outside, and that's outside of Washington.

HANNITY: Governor, good to see you.