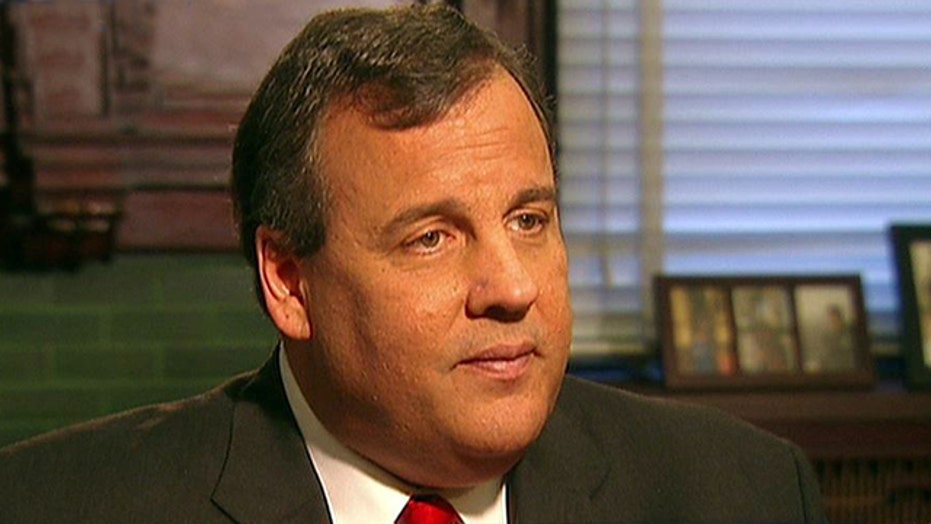 This is a rush transcript from "The Kelly File," March 31, 2014. This copy may not be in its final form and may be updated.

MEGYN KELLY, HOST: Not so long ago, he was the frontrunner for the Republican presidential nomination. Then a scandal over traffic jams on a bridge hit. For the first time since he addressed the cameras once on this months ago, Governor Chris Christie spoke out last week. In part two of my cable news exclusive, I asked the New Jersey governor about his plans for the future, the GOP presidential field and whether the U.S. is weaker today than it was not long ago. Watch.

KELLY: One thing that appears to have hurt you is some in the Republican base is what people unaffectionately refer to as the bear hug of President Obama, in the wake of Hurricane Sandy. Some people on the right in particular, felt betrayed by that. They felt that you've hurt you Mitt Romney a week before the election in what appeared at that time to be a very tight race. Did you?

GOV. CHRIS CHRISTIE, R-N.J.: No, and the best source for that information is not me. It's Mitt Romney. And I have seen him publicly say over and over again, that it had absolutely no effect on the race, either subjectively for the way he felt or objectively in terms of what they're polls looked like at that time. So, the answer is no.

Secondly, the other thing that Mitt Romney said to me at that time was, "You're doing your job. Go do your job as best as you can. I've had that job."

KELLY: But, he was gracious about it. But that doesn't necessarily mean the voters will be, right? Because there a lot of people out there -- we got the e-mails, who felt that you were too effusive and that you didn't have to be that effusive in your praise of the man who wanted to hold onto the White House when a lot of Republicans and independents, and others in this country did not want him to. To those voters still who are still holding a grudge against you, what do you say?

CHRISTIE: First of all, it was not one person with the possible exception of Paul Ryan in America who worked harder for Mitt Romney. I was the first governor to come out and endorsed him in the fall of 2011. I travelled to 26 states for him. And right up until the day of Hurricane Sandy, in fact that Friday before Hurricane Sandy, I was in North Carolina campaigning and raising money for Mitt Romney.

So, some people have -- who are you referring to, have a very short memory. Fortunately, Mitt Romney doesn't and the fair people don't. When that crisis hit, I was asked, "Has the president have been responsive? Has the president been there to help the people?" And my answer is yes. And Megyn, if I had to do it again, I would say exactly the same thing, because it was an honest answer. I also.

KELLY: They didn't want you to have such a smile on your face when you said it. They wanted you to look grumpier.

CHRISTIE: Well, guess what, I didn't -- if anybody saw me smiling during Hurricane Sandy, they were not looking at the right pictures, I wasn't.

KELLY: I want to move on to a couple other things.

CHRISTIE: But let me just finish on that point. These are the ABCs of me, you ask me a question, I will give you an honest answer. Some days, it may serve your political purpose, and some days it may not. But in the end, the comfort you should take from it is I'm not changing as the wind blows. I say what I think and I think that is what people should take cover from these critics. I think many of them, at least my interaction, are kind of over that.

KELLY: There has been some bad blood between you and Rand Paul. He's very critical of you on the bridge case thing. Would you campaign for him?

KELLY: Now, some people say that Mitt Romney may run again. Do you think that's a good idea?

CHRISTIE: Listen, if Mitt Romney wanted to run again, I would be totally up to him. I don't think he will.

KELLY: How about you?

KELLY: I had to ask. I knew we were going to get the answer. You sound like you're closer to doing it than you were the last time around.

CHRISTIE: Well, I think I'm older and more experienced and it is certainly something that I said to everybody that I'd consider.

KELLY: But do you have too much baggage?

KELLY: You had so little baggage the last time. This time is different.

CHRISTIE: I'm older. And you know what? If you don't have baggage, they will create baggage for you. That's politics in America today, that's the way it goes. In the end, you know what? People don't judge you on that kind of stuff. People look into your eyes and they try to decide what is in here. And that is how they vote. They vote for what they believe is in your heart. And can they trust you? Do you care about them and understand them? Will you be the type of person that they will be proud of sitting in that office?

And on that basis, if I ever decided to do it, I'll be happy to be judged. But my son said something interesting to me about this. He said to me you know, dad, if the way you judge whether you have been a success in your life is that you had to have been a president of the United States, that is a pretty high bar. So, you know.

KELLY: Let's hope that is not right.

KELLY: I want to ask you about the sitting president of the United States. The latest polls show that more Americans think the United States is weaker than it was before Barack Obama took office. Do you agree with that?

KELLY: We're weaker as a country?

CHRISTIE: I think we are, as perceived by the rest of the world.

KELLY: And what about freedom here? Because the latest polls show that we also -- Americans are feeling less free than just six years ago.

CHRISTIE: Well, on that one, I'm not quite as agreeable. I think we should be looking around this country and saying how fortunate we are, especially compared with the rest of the world.

KELLY: Even with the expansion of big government and people feeling like Uncle Sam is on top of them?

CHRISTIE: Well, listen. I think that stuff needs to be reined back.

CHRISTIE: I think the jury is still out on that. I do think that he has changed things especially through ObamaCare in the way that has been really, really injurious in the country's long-term economic health and to our health care system. That is why I fought so hard against it here in my state.

But transformation and being a transformative president, I don't think can be judged until the end and even beyond it. And the president has a lot of work to do if he wants to be transformative, even in a way that I would object to. I don't think he is quite there yet, and so I think that there is a lot of work to be done on our side as well. We have to stop talking all the time about what we're against, and we need to start talking about what we're for.

And that will be a much more effective counterweight to the president than just constantly talking about what we oppose of his. Let's talk about what great ideas that we're for and how we'll make those happen. I think that will give people a lot of faith and confidence and hope about the future, not just that we're against things, but that we are for a positive vision for our country.

That is what I have done here in our state. I talk about what I'm for and I fight for it. And then people judge -- some people don't like it. But that is OK. At least they know what I'm for and then they can make a judgment on me one way or the other. I think for the president to be transformative, we have to drop the ball, and I hope that we don't.

KELLY: Do you think that the Republicans are gonna take control of the Senate?

KELLY: I'll leave it at that.

CHRISTIE: And remember, I was the only guy who predicted in 2012 that Mitt Romney was going to beat Barack Obama handily in the first debate and transform the race. Go back and look at the Sunday before, people thought I was crazy. I was right. I predicted they were going to win the United States Senate also. We'll roll that tape back after November.

KELLY: Tomorrow, you're heading to Vegas.

KELLY: Do you feel like your luck is changing?

KELLY: We loved to know what you think about our exclusive with the governor, his thoughts about 2016, President Obama and everything you just heard. Follow me Twitter @megynkelly using the #kellyfile and share your thoughts with us on our Facebook page at facebook.com/thekellyfile.