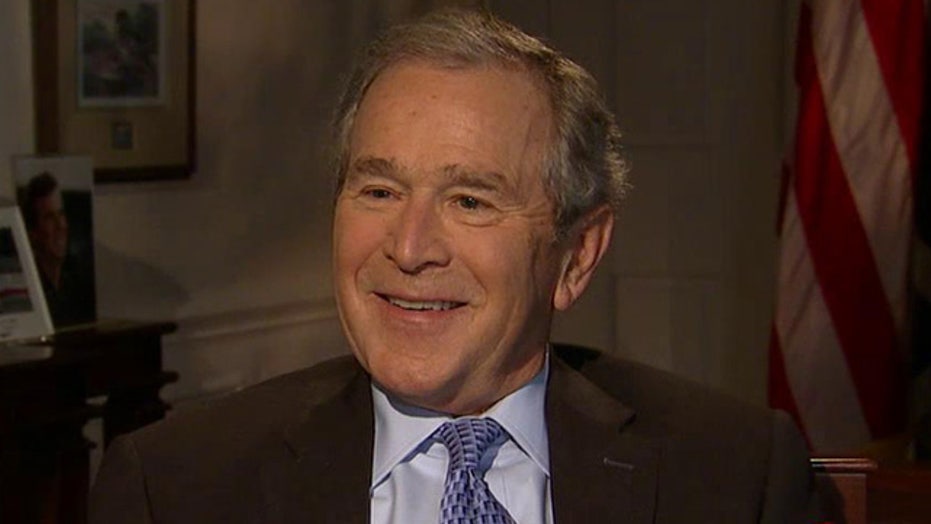 Exclusive: George W. Bush on growing up in the Bush family

This is a rush transcript from "Hannity," November 13, 2014. This copy may not be in its final form and may be updated.

SEAN HANNITY, HOST: And welcome to this special edition of "Hannity" on the campus of Texas A&M University at the George Bush Presidential Library. For the entire hour, we'll be interviewing President George W. Bush, his brand-new book, "41: A Portrait of My Father."  We're going to take a little tour of this museum as the show continues. We're glad you're with us.

HANNITY: You call the book a love story, a personal portrait of an extraordinary man you're blessed to call Dad.

G.W. BUSH: Yes, it is a love story. I mean, you know, people who pick up this book, buy this book, expect to read an objective analysis of George Bush are going to be disappointed. Those who really want to find out what he's like from a person who was president, just like he was president, who happens to be his son, then I think they're going to find an interesting book.

HANNITY: Was this for him for that reason? Did you want to do it because you felt you wanted to...

G.W. BUSH: Well, there's a lot of reasons I wrote it. But yes. I mean, I want people to -- first of all, he hasn't gotten a lot of attention. One reason is, is because he didn't write his own book. He's a modest, humble man. He's not a chest thumper. And therefore, a lot of people haven't analyzed his presidency. But they're going to start, and I wanted to be a part of the initial wave.

HANNITY: You're in a special club. John Quincy Adams never wrote about his dad.

HANNITY: Q and W. There you go. And that was part of your motivation.

G.W. BUSH: It was. David McCullough's daughter told me that, you know, her dad had always wished he had read a book by John Q about his father. I said sounds like a good idea. And so I started it a couple of years ago and...

HANNITY: You talk in the book -- only two times in American history have both parents been there for their son's inauguration.

HANNITY: And only one time have both parents been there when they finished the presidency.

G.W. BUSH: Exactly. John Kennedy's mother and dad were alive when he was sworn in. And then, yes, basically, it's a loud shout out to how blessed I am.

G.W. BUSH: To be able to have your parents alive during the presidency, and of course, have them thrive after the presidency. After all, this is a guy who jumped out of a helicopter on his 90th birthday.

HANNITY: I saw the video.

G.W. BUSH: It was unbelievable.

HANNITY: By the way, and you voted yes on that. You...

HANNITY: Because you -- I guess the family -- your mother was a little suspicious. Some of the doctors didn't think it was a good idea.

G.W. BUSH: Yes. Well, the chief of staff's calling around saying, "What do you think?" And I said, "Jump!" I mean, you know, after all, it had to have made him feel very young.

HANNITY: Yes. You had a tough go of it. You tell a story in the book -- and I think it kind of describes how close the Bush family is -- back in November 2012, your dad had a bad cough.

HANNITY: Went in the hospital.

HANNITY: December, he had pneumonia. So you, Laura, the girls -- your daughter, Jenna, is expecting.

HANNITY: Going to the hospital, go to see your dad.

HANNITY: You write in the book, "No crying."

G.W. BUSH: ... his last image. So we get over there, and it's at an ICU unit at Methodist Hospital. And Barbara and Jenna are playfully rubbing his head and cooing, and you know, trying to bring him comfort.  And he leans over and rubs Jenna's pregnant stomach and said, "There's death, and then there's the beauty of life." And of course, we all wept.

G.W. BUSH: Yes, as well as misunderestimated him.

G.W. BUSH: Thank you for remembering some of my great malaprops )ph)

HANNITY: Well, that's -- we all have them. Don't worry. I've been in the business for a long time.

HANNITY: My father did the same thing, right, for World War II. That was that generation.

HANNITY: And he goes to war. He's a fighter pilot. We have the video of him when he was rescued after he was shot down. Two other men lost their lives. You tell a story -- he never forgot them.

HANNITY: And thinks about them all the time.

HANNITY: What does that tell us about him?

G.W. BUSH: Well, it tells he's a loyal man who has got a huge heart.  And he rarely talked about his experience. I'm sure your dad didn't, either.

And it was an extraordinary experience for an 18-year-old kid. It had to have been. And I think it speaks to a lot of the decisions he made in his life, such as foregoing Wall Street to go to Odessa, Texas.

G.W. BUSH: Risk taker, absolutely. And the truth of the matter is, my brothers and sister and I benefited from his example.

HANNITY: Interesting anecdotes you use in the book. You were a pain in your dad's neck, a little bit.

HANNITY: And how did your father handle that?

G.W. BUSH: He handled it -- well, he handled it -- there's a line you don't cross, but he handled it with grace. Yes, he saw me playing with some soldiers. I was 5 or 6 years old. And he said, "Where'd you get those?" And of course, I balked. And I didn't have a very good answer. I wasn't well scripted.

G.W. BUSH: And next thing I know, I'm marching into the store, apologizing to the store owner and returning these little -- pathetic little toy soldiers. And that was it. There was no yelling, screaming, haranguing. It was...

HANNITY: And then you urinated in the hedges.

HANNITY: And then you had a little too much to drink after a tennis match and knocked over a garbage -- you were a troublemaker.

HANNITY: There's a line you use about his parenting.

HANNITY: Yes, that one.

G.W. BUSH: Yes, it's the one I used on our girls a lot. And it's about one of my favorite pieces of advice for parents. And it basically says, Look, just love your children, you know? And if you love them, there's a good chance, better than even chance...

HANNITY: But in the case where you came home and you'd been with one of your dad's friends and you knocked over the can, the garbage can...

G.W. BUSH: Well, that's right. And so when you admire somebody -- and he had earned my admiration over the years by being such a great father. And yes, I came in drunk. Mother gave me a scolding, and then said, "You need to go see your father." And I defiantly charged in the room, and he's reading a book and he kind of lowers the book and then takes off his glasses and stares at me -- glasses back on, book up.

I mean, it was such a childish behavior, it didn't deserve a word of his. On the other hand, his actions sent a clear message. And as I put in the book, I slunk out of the room. You know, I felt terrible because I had -- you know, I did make an ass out of myself.

HANNITY: It's very interesting because you kind of compare and contrast parenting today. And I -- you know, I think the word "helicopter parent" would probably accurately describe me. And that's very different the way you're describing your dad...

HANNITY: ... and just the fact that he wouldn't talk to you was enough to change your behavior, had a big impact on you.

G.W. BUSH: Well, but you have to earn that respect to begin with. In other words, it wasn't just, you know, happenstance. It was that over the years, you know, he's -- he earned all our respect. And I'm sure he -- look, I wasn't around a lot of the time when my brothers were growing up.  I'm seven years older than Jeb, for starters. But I'm confident he handled them the same way he handled me, which was, you know, "You've disappointed me."

HANNITY: But you said he didn't hug you, never said he loved you, didn't need to.

G.W. BUSH: Yes. Well, initially. Toward the end of his life, of course, he's always saying, "I love you." And if he really wants to get you, he says, "I love you more than time can tell," which is the last words -- some of the last words he heard from Robin right before she died.

HANNITY: You know, you talk about that in your book, "no crying in front of Robin." And when you wrote that, that he had said that to you -- because she was 3 years old, had leukemia.

HANNITY: And they kept going back and forth to New York, your mom and dad.

HANNITY: And when I thought -- when I heard that he had said that, and then you said, "No crying in front of Dad"...

HANNITY: ... I saw a similarity. I put that together.

G.W. BUSH: Well, we're all from the same gene pool, you know? But yes, it was -- that had to have been a very tough period for them. And their marriage became stronger because they're two extraordinary people.  And as I put in the book, you know, they both went three quarters of the way. I asked mother one time, I said, "How's your marriage?" I've never seen Mother and Dad fight, ever, yell, scream, holler. They needle each other in a friendly and loving way, at times, but never a harsh word.

And so I said, "Well, how'd this marriage happen?" And she said, "We both went three quarters of the way."

HANNITY: It's a good answer.

G.W. BUSH: Really interesting answer. In other words, they're willing to put self aside to make it work.