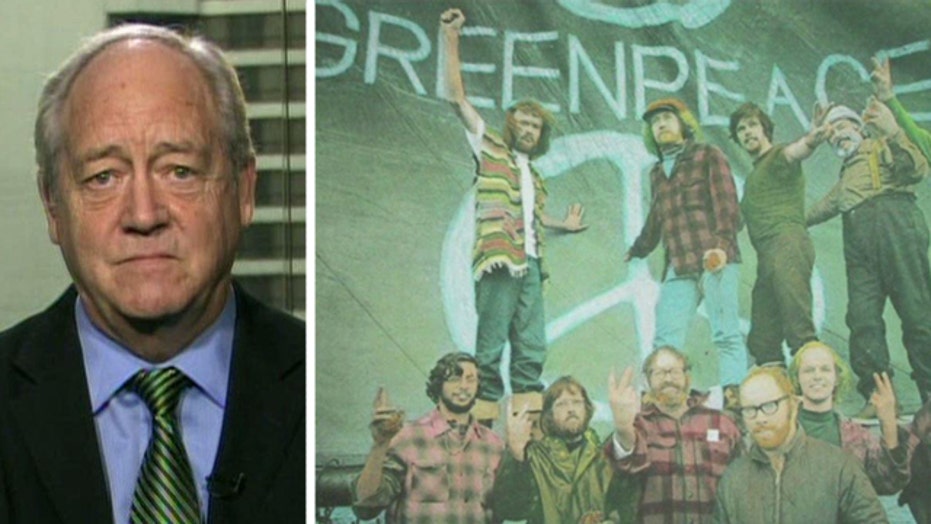 This is a rush transcript from "Hannity," February 27, 2014. This copy may not be in its final form and may be updated.

SEAN HANNITY, HOST: For years the left has been spinning their lies about global warming, all in an effort to push through their radical agenda. Watch this.

AL GORE, FORMER VICE PRESIDENT, DEC. 6, 2012: Dirty energy causes dirty weather, and we have to come to our senses and do something about it.

SECRETARY OF STATE JOHN KERRY, FEB. 16: We do not have time for a meeting anywhere of the Flat Earth Society.

PRESIDENT BARACK OBAMA, JAN. 28: But the debate is settled. Climate change is a fact. And when our children's children look us in the eye and ask if we did all we could to leave them a safer, more stable world with new sources of energy, I want us to be able to say, Yes, we did.

HANNITY: Well, they're about to have a harsh reality check from my next guest. Patrick Moore is co-founder of Greenpeace, and he says that there's zero -- let me repeat, zero -- evidence the Earth is warming because of human activity.

He joins us now for an exclusive interview you'll see only here tonight on "Hannity."

Mr. Moore, welcome to the program. Thanks for being with us.

PATRICK MOORE, FORMER GREENPEACE MEMBER: Nice to be with you, Sean.

HANNITY: All right, I have felt this, and I've interviewed many people over the years. I agree with you, but I'm surprised that it came from your mouth. Explain.

MOORE: Well, actually I left Greenpeace a long time ago. I was one of the original founders. I was with them for 15 years in the top committee. But by around the mid-'80s, they turned sharply to the political left and began to adopt positions that I could not accept from my scientific background. I have a Ph.D. in ecology and I am very well-versed in all the biology subjects, as well as climate change.

And I just had to come out and express what I have been studying for the last 25 years, that there is actually no scientific proof. It's not really about evidence so much, it's more about an actual scientific proof that humans are the main cause of the slight warming that has happened in this world over the last 100 years or so. In fact, the world started warming back after the little ice age about 250 years ago.

And the climate change panel of the United Nations is saying since 1950, we have been the main cause of warming of the Earth. Yet during the first half of the 20th century, there was a warming period about identical to the warming period to occurred in the last half, and they're not claiming that we caused that. They're not really saying what they think caused that.

So there is simply no logic to saying that we know for certain. That's why they use the term "likely." Actually, they say "extremely likely," which is no really different than saying "likely." It's just their opinion. In other words, it is a judgment that humans are causing the warming, rather than any kind of scientific proof.

HANNITY: When the president says the debate is settled, when the secretary of state says that we're not going to -- we have no time for a meeting with the Flat Earth Society -- five years ago, Al Gore predicted the north polar ice cap would be completely ice-free. And guess what? There's plenty of ice.

What do you think is driving this agenda? Because I have my own theory on it. I just want to get your thoughts. Is there an agenda driving it?

MOORE: It is a powerful convergence of interests among a very large number of elites, including politicians who want to make it seem as though they're saving the world, environmentalists who want to raise money and get control over very large issues like our entire energy policy, media, for sensationalism, Universities and professors for grants. You can't hardly get a science grant these days without saying it has something to do with climate change.

It is a kind of nasty combination of extreme political ideology and a religious cult all rolled into one, and it's taken over way too much of our thought process and way too much of our priorities. There are millions of children dying every day from preventable vitamin deficiencies and diseases, and we are spending hundreds of billions of dollars on a problem that may not exist.

Nobody's saying that the Earth hasn't warmed a little bit. What we're saying is there's no proof that it is human activity that has caused this little bit of warming.

What we're also saying is this little bit of warming is actually good for most species on planet. Ice and frost are actually the enemies of life. And for the Earth's life history, it has been much warmer than it is today and CO2 was much higher than it is today.

People need to study the long history of the Earth. These true believers in climate change are only looking at the last 100 years. That is a blink in nature's eye. We've had billions of years of climate history in this world, and if you look at just the half billion of them, the most recent half billion, you will see that CO2 is lower now than it has been through most of the history of life on Earth, and so is the temperature.

HANNITY: Do you expect to be attacked by those that are part of this cult, as you call it, and those with this agenda? Because I would expect that coming from you, as well informed as you are, that you're probably going to come under some heavy fire. Do you expect that?

MOORE: Yes, I do, but I have no qualms about it, Sean. I know this subject very well. I understand that, actually, water vapor is the key to understanding the impact of CO2 increase on global warming and climate. And all of these climate models -- and of course, it doesn't matter how sophisticated a climate model is, it is not a crystal ball. You could learn more about the future by throwing a bunch of bones on the ground than you could by a lot of these climate models, because that's all they are is computer models. They are not something you can predict the future of the Earth with.

And they're all saying that the CO2 is going to result in a very large increase in temperature. And the way they do that is by assuming that the increase in water vapor, which will come in a warmer world, is going to magnify the effect of the carbon dioxide by two or three times, when, in fact, increased water vapor may dampen the effect of CO2, and no computer models knows the answer to that.

MOORE: Nice to be with you.