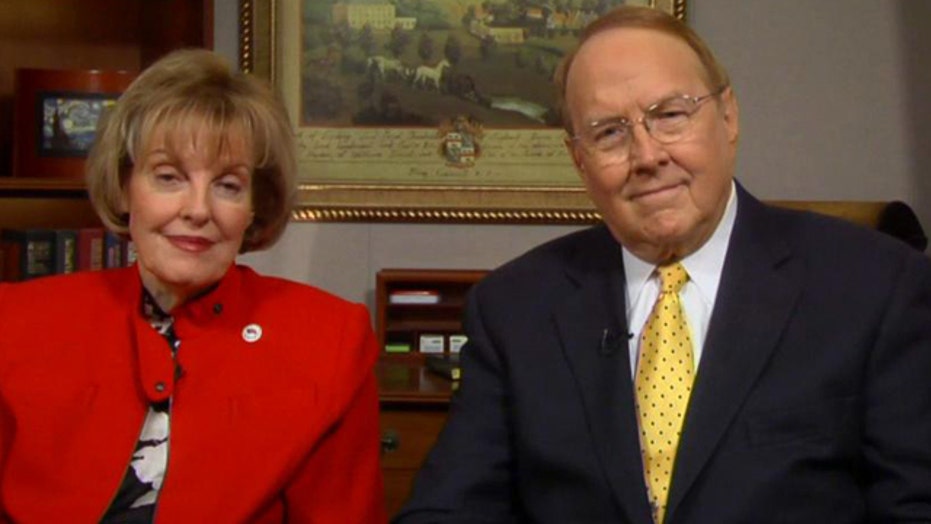 Exclusive: Dr. Dobson lashes out at Obama in open letter

This is a rush transcript from "The Kelly File," May 1, 2014. This copy may not be in its final form and may be updated.

DR. JAMES DOBSON, FOUNDER AND PRESIDENT OF FAMILY TALK: It will be a violation of my most deeply held convictions to obey what I consider to be the principles of scripture. The creator will not hold us guiltless if we turn a deaf ear to the cries of innocent babies. So come and get me, Mr. President, if you must, I will not yield to your wicked regulations.

MEGYN KELLY, HOST: That was Dr. James Dobson, founder and president of Family Talk at the National Day of Prayer event in Washington, D.C. today. Dr. Dobson was reading from an open letter he sent to his constituents two years ago.

Here now in a "Kelly File" exclusive, Shirley and Dr. James Dobson. Thank you both for being back with me.

So, we covered the controversy about this about a week or so ago. And today, we have the event. Dr. Dobson, let me ask you, let me start with this, because Representative Janice Hahn -- a Democrat in California -- walked out of the event today, and said, this was supposed to be a non-partisan day of unity,that you behaved inappropriately by going after the President as you did --you called him quote, "the abortion president" -- and that you injected politics into a day that was supposed to be non-partisan. Your response.

DOBSON: Well, you called it a scathing attack, and that really doesn't characterize what I had to say today. As a matter of fact, I started my comments my complimenting the president for sending a proclamation declaring a National Day of Prayer today. He was late in getting it, but it came mid-morning. When we got it, I went to the audience and I complimented him for that and there was a prolonged applause. So this was not --

KELLY: But you called him the abortion president.

DOBSON: I did. But I went from there -- I'm talking primarily not about the president but about our response to it. It's very difficult for people who aren't part of the sanctity of life movement to understand just how intensely we feel the issue of the killing of babies, and President Obama has not only done everything he could to promote abortion -- and he let us know that before he was elected and the people elected him anyway -- but that he is determined that people of faith and people of conscience are going to have to go along with it and be part of it. And two years ago that concerned a mandate that everybody who has insurance would have to pay a dollar a month or more --

DOBSON: That has not yet become law. It has not been withdrawn to my knowledge. But that's when I wrote what you just read. That was the context of that saying if you insist on us paying for abortion, that money would go to Planned Parenthood type organization, then we're not going to go there. That was about me, that was about us. That was not primarily about the president.

KELLY: I understand. But your critics had pushed back suggesting that the piece of ObamaCare you're objecting to did not become law and secondly, the business of the funding for Planned Parenthood, you're not allowed, federal funds are not allowed to be siphoned to the abortion procedures or facilities. I understand money is fungible but --

KELLY: I get it. I understand it. But can you respond to Representative Hahn's accusation because, you know, she claims you injected politics where none should have existed.

DOBSON: Well, it's really interesting. That room, the Cannon House Office Building was jammed. There were people down the hall waiting to get in. There were standing ovations on and off all the time I was speaking. You didn't show that. And there were also, now we know, 43,000 prayer events today.

KELLY: OK. I apologize. I'm coming up against the --

DOBSON: One person chose to walk out as far as we know, one person, and that's what everybody keys on the. But the people who were there were with me 100 percent because they also believe in the sanctity of human life.

SHIRLEY DOBSON, WIFE OF DR. JAMES DOBSON: And Megyn, it's not a political issue --

KELLY: I apologize, Shirley, I'm coming up against a hard break now in 10 seconds. So, I got to go.