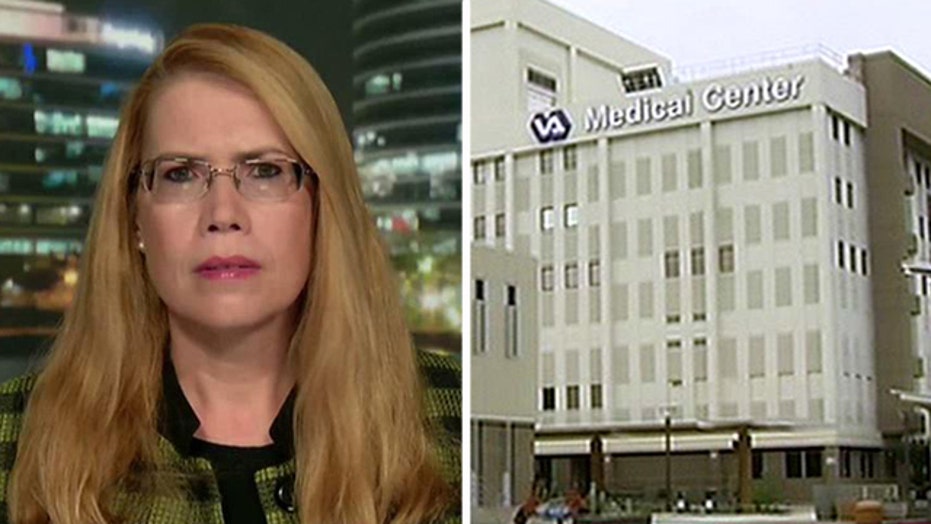 Dr. Katherine Mitchell on the lack of patient-care for veterans

This is a rush transcript from "The Kelly File," May 5, 2014. This copy may not be in its final form and may be updated.

MEGYN KELLY, HOST: This is unbelievable. Trace, thank you. My next guest is another Phoenix V.A. doctor adding her name to the list of those alleging stunning misconduct at her hospital. She says she rescued some evidence that will help prove it. Dr. Katherine Mitchell has worked at the Phoenix V.A. for nearly 16 years. And she is now medical director of a transition program for veterans returning from Iraq and Afghanistan.

Dr. Mitchell, thank you for being here. This is stunning. You heard that witness that we tracked down in Phoenix saying there was a secret list. The veterans were being placed on it because they wanted to show that the wait times were shorter than in fact they were. In fact, if veterans were waiting between five and six months in some cases to get seen and the secret list helped the V.A. keep a record of who they were. The official list showed the wait list was only two weeks. Do you confirm that was happening?

DR. KATHERINE MITCHELL, PHOENIX VA HOSPITAL WHISTLEBLOWER: Well, I knew that there was a delay between the time the patient requested an appointment and the time they were put on the electronic waiting list, even when I first transferred over to the clinic where I work in now. We went back through to see if we could schedule some patients with me and we found some, they have been waiting as long as a year to get in for a new primary care appointment.

KELLY: And so, now you have Dr. Foote and others coming forward to say I'm telling you, that's because there was a secret list. That we were basically, that the employees were told to keep the veterans off of the official list until they could get on within two weeks. Now, you say, because now the evidence has come out that, oh, we can't find that secret list. Well, the testimonials have been that's because we were ordered to destroy it. You say, not so fast, because there is additional evidence that the secret list existed. Tell us.

MITCHELL: Correct. There is -- the computer every time a veteran requests a new patient appointment the computer generated a fingerprint or a record of that. And what the Health Administration Service didn't realize is that you could actually print a list of every patient that's requested a new patient appointment. When they found that out the week of April 24th, then there was a move made by administration to bring in eligibility staff to essentially go into the computer and electronically erase that list.

MITCHELL: Correct. In the history that I've been there in general, the staff have warnings of an OIG inspection or inspector general investigation. And so, things are usually covered up. It wouldn't be unusual.

KELLY: It might not be unusual, but it's obviously unethical. So, there -- so somebody at the Phoenix V.A. is ordering people we presume to destroy the original secret list. And then secondly, once the use inspector general begins its investigation to go in and destroy this additional record that would prove that there was a secret list. Do you know who gave that order?

MITCHELL: Yes, I do, but that's part of the OIG investigation. It was part of senior administration.

KELLY: Can you tell me whether that person has been placed on leave yet?

KELLY: Can you tell me whether it was Sharon Helman?

MITCHELL: To my knowledge, Sharon Helman was not involved. I have no knowledge one way or the other.

KELLY: OK. So, you don't exonerate her, and you don't condemn her either way?

MITCHELL: Yeah, the information I have comes directly from the eligibility staff that we're working with the list and the health care administrators that force them into mandatory overtime.

KELLY: What were these fellow employees saying to you when they had been told, when they have been given the order, destroy the evidence?

MITCHELL: When they were brought in on that Saturday, they weren't told that they were destroying evidence. They were just told that they were making appointments with a new set of computer keys. Essentially, they were told they were working off a different list, but there was nothing out of the ordinary. The goal was to facilitate getting new appointments for veterans had been waiting for some time. The employees enlist to my knowledge talking to the one employee left for my assistance, weren't aware of what was going on. The employee who asked for my help figured it out fairly quickly and then found the way to prevent that from happening, at least until the following Monday.

KELLY: Well, that's all that matters. If there some preservation of records, then the inspector general has it. And we expect to get to the bottom of this and we expect that report to outline all of this in great detail, so we can all know the truth. It's the least our veterans deserve. Thank you for helping them and for coming on. All the best to you, doctor.