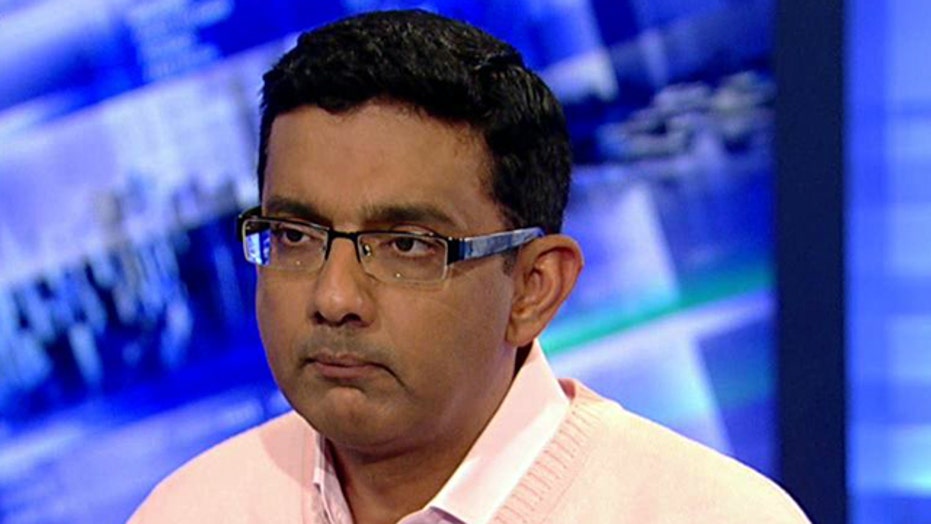 Exclusive: Dinesh D'Souza on why he pleaded guilty

This is a rush transcript from "The Kelly File," May 20, 2014. This copy may not be in its final form and may be updated.

Now in an exclusive interview, Dinesh D'Souza joins me live. Creator of the new film "America" which is set for release in July. Dinesh, good to see you.

DINESH D'SOUZA, CONSERVATIVE AUTHOR AND FILMMAKER: Good to be here.

KELLY: And so now, this case is resolved for today and the Obama administration gets to call one of its top critics a convicted felon. This is what they wanted all along?

D'SOUZA: I don't know. I mean, I was facing two charges, Megyn. The first one was exceeding the campaign financially limits. The second one was causing the government, the election commission to file a false report and that second charge carried five -- a maximum of five years in prison. So what happened is I pleaded guilty to the charge of exceeding the campaign financially limits and the government agreed to drop the other charge.

KELLY: There was never any doubt that you did it.

KELLY: I mean, you're defense in this case was not I didn't do it. It was, you know, I didn't do it with any intent, I didn't do it with the right requisite state of mind and its selective prosecution by the government who doesn't go after anybody for this kind of crime except coincidentally one of the president's biggest critics. But the judge didn't allow you to bring that defense.

D'SOUZA: Interestingly I didn't say at the beginning, I didn't exceed the limits and now I'm saying the opposite. On the contrary, the facts of the case that I, you know, induced two of my close associates to contribute, I reimbursed them. I did do that. And actually that was wrong. I should not --

KELLY: It's an end around the campaign finance laws.

D'SOUZA: Yes. It's an end around campaign finance law. I acknowledge responsibility. And I have -- I did admit doing that from the beginning. But I did contest the issue of selective prosecution, why was I being -- so, we made a motion before the judge on selective prosecution but in a ruling last week he said no you can't bring that into the case. So what really happened is I was going into a trial with in a sense, no defense. And so it seemed to me wise to, to have the second charge --

KELLY: It wasn't just you that though that this was selective prosecution. Just so our viewers know, Alan Dershowitz, who is a liberal Democrat, though this might be selective prosecution, Ted Cruz -- you united Alan Dershowitz and Ted Cruz in this view. Four U.S. senators wrote a letter demanding to know what the basis for bringing this particular charge against you since we've has so many instance of others doing similar things.

The Washington Times points out in editorial yesterday, that Mr. Obama's 2008 presidential campaign, was itself fined almost $400,000 in 2013 for failing to disclose millions of dollars in contributions and missing deadlines for refunding excess contributions. No one was threatened with prison. Is this about Dinesh D'Souza or is this about upholding campaign finance laws?

D'SOUZA: You know, when I look around the country, it's remarkable to see the cases that do and don't get pressed. So for example, look at Harry Reid. There seems to be multiple campaign finance things with him. The last I read, he used money from his campaign finance to pay for his daughter's wedding. Then you look at numerous other cases and it seems that the Obama administration does not choose to push those.

So that's really the issue. It's the issue of fair treatment. You know you don't want to have a country where lady justice has one eye open and she winks at her friends and then gives the evil eye to her enemies.

KELLY: Let me ask you about the substance of it and the violation of law. Because a lot of our viewers saw your earlier film and enjoyed it and want to go see you next films. And they may not want to believe that you're somebody who would willingly flout the law. Why did you do it?

D'SOUZA: My long time friend, Wendy Long, I've known her for 30 years, and she was running for the Senate in New York. Her campaign was absolutely flailing, and I wanted to help her. And so I just chose the wrong and stupid way to do it. I shouldn't have done it. And I'm taking responsibility for it.

KELLY: You think you're going to get jail time?

D'SOUZA: I don't know. That's up to the Judge Berman. There's a hearing -- there's a sentencing in September and I'll find out.

D'SOUZA: Well, one thing, Megyn, I mean, this is been a bit of a scary process. But I will assure you that I am determined to forge ahead. I mean, I feel that I got a powerful message. The message of our film "America" that comes out in a month is indeed the issue of justice. Very often as conservatives we tout liberty, but the American founding, when you go back and read the Declaration of Independence, it's an indictment of the injustice of the crown and liberty for the American founders was a solution to the problem of justice. So justice is at the center of our film.

KELLY: Did they scare you?

D'SOUZA: Yes. It's a scary thing to have the federal government that has a lot of power having you in its sights. And so I'm not -- I mean it's a process that I have been going through and I'm not done with it but it's not going to deter me from speaking out on public issues I'll tell you that.

KELLY: And you don't recommend it to others, I'm certain. Dinesh, listen, good luck to you.

KELLY: Thanks for coming on.