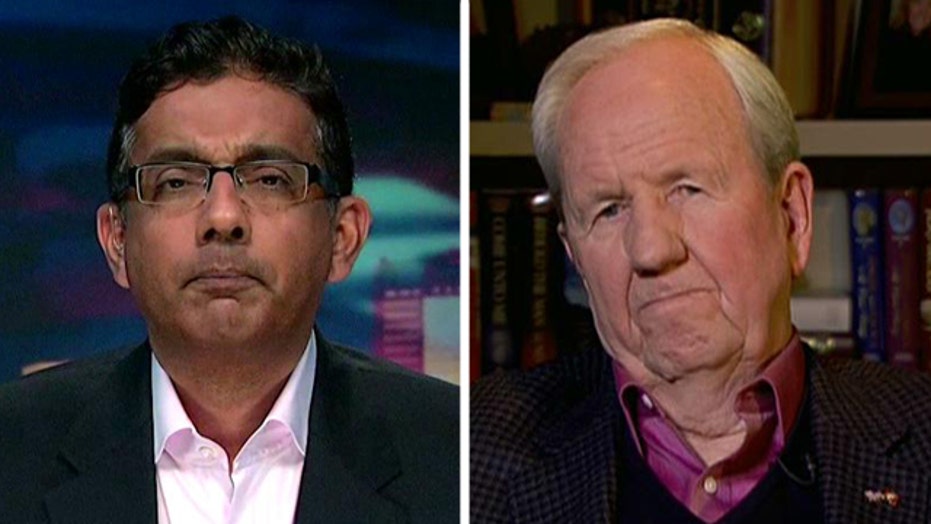 This is a rush transcript from "The Kelly File" March 10, 2014. This copy may not be in its final form and may be updated.

DINESH D'SOUZA, POLITICAL COMMENTATOR: After we did 2016, Obama was very upset, he did a big diatribe against me and the film on his website, barackobama.com. But if he was upset about that film, wait until he sees the new one.

MEGYN KELLY, HOST: Well, that was conservative activist, Dinesh D'Souza, speaking at CPAC on Friday. His new film making it television debut tonight in The Kelly File exclusive -- well, the trailer is called America. The movie highlights key moments in American history and discusses what the world might look like if America did not exist. Watch.

KELLY: Wow. D'Souza, who claims that he was targeted by the FBI for his outspoken criticism of President Obama, was recently indicted on federal charges of violating campaign finance laws. He has pleaded not guilty, and many of his supporters believe that those charges are politically motivated. He joins me live now, along with Gerald Molen who's an academy award winning producer of Schindler's List, Jurassic Park, to name of couple, and a producer of this film America. Gentlemen, good to see you both.

Wow, what an amazing trailer and what an amazing idea to think of -- it is sort of like it is "A Wonderful Life" for America, instead of George Bailey. Dinesh, why did you think it was necessary?

D'SOUZA: Well, the -- as I thought about this film. I didn't want to make a film that was simply a sequel, a follow-up to 2016, a film that focus narrowly on Obama, on Hillary, on politics. I wanted this to be a really big film. And I wanted this in a sense to be a film that is -- you know, I'm an immigrant, Megyn. I love America, but I chose America. The philosopher Edmund Burke was said to love our country, our country should be lovely. So, one of the core themes of this film is why is America lovely? And why is it that some people are so hostile to the principles that built America, and that is why I wanted -- sorry.

KELLY: And before Gerry (ph), I want to ask you, because you recently you had an amazing debate and appearance with Bill Ayers, of all people, a domestic theorist, now professor retired. And he is part of I think it is fair to say the far left. People who do tend to blame America for the ills and evils of the world. We pulled at least one sound byte of his to give the audience a flavor of what we're talking about. Here it is.

KELLY: That is about the tamest from him. But you take on those claims in this movie and try to rebut them.

D'SOUZA: Yeah, we have all of the most thoughtful the most vituperative leftist of all in the film. And that's the beauty of it, but we don't silence anybody voices. I had actually approach Bill Ayers to ask him if I could interview him for the film and he said, well, why don't we do a public debate instead. And I said, fine, let's do a debate, if we can film the debate, so we can record. Because to me, in a sense this is a clash between the anti-Americanism of the radical 60s on the one hand that is Bill Ayers, and on the other hand, my perspective, which is, the perspective of the first generation immigrant who chose America because it's a place where I can be the architect of my own life.

KELLY: Gerry, why did you think this is necessary? I know you said you believe this is a -- this is a love story about America. Why, why do we need that?

GERALD MOLEN, PRODUCER OF "AMERICA": Well, it is obvious that we need it because a lot -- it is today we have kids who can't find America on a map. We have kids who probably can't even spell America. And I think that we have you know, left them out. We've done them a great just service by not being more on top of it, showing our patriotism a little more. I think in July, when the film comes out, every parent and grandparent should take the kids they owe it to them. They should give them a picture of America and what America is all about.

KELLY: And that scene, that where showing from the trailer, it's imagine scene when General George Washington is killed on the battlefield. And I guess, you know what would happen there after if there were no President Washington and there were no real America as we know it, do you think Gerry, you're gonna get pushed back on this film the same you know obviously, the first film was about President Obama was not well received the by the Hollywood elite?

MOLEN: Well, I would hate to think we would get pushed back. We probably will. You take it is a story about America, it's truthful, it is there. Dinesh has done a fine job of the creating a vision for everyone. And I think it is something that everyone should embrace and look forward to it.

KELLY: Dinesh, why do you think that President Obama is not going to like this film? Because it doesn't sound like it is a takedown of the president -- you know, in the way your last film was. It sound like, you know, basically it takes down some left-wing ideology, but do you believe that President Obama, doesn't like America, doesn't love America?

D'SOUZA: No, I wouldn't say that at all. I think that Obama has a very specific ideology. You are talking a little earlier in the show about the Ukraine for example, and a little bit of mystification about why Obama is not acting in a more forceful way. Well, I think part of the reason for that is Obama has an ideology that says why should America be the dominant power in the world? We have fight for the set of the world population, why should we consume 25 percent of the world's Gross National Product? Why should we push everybody around? So, I think in some sense, Obama would not be unhappy if Russia, if China, if Brazil, if India, in other words, if the world moved toward a multi-polar world with a number of different vortexes of strengths, in which America was just one of powers at the great dining table of nations.

So, in this film we create some imaginative possibilities, I mean there are many different ways that America could not exist. Obviously, if Columbus never landed in America, he could have kept going and landed in India. Another way, if Washington was shot, and there was no American Revolution, or think if Lincoln had lost the Civil War, if the Southern side had won, the union would be -- would not have existed. America would be completely different. Imagine if Hitler got the atomic bomb, before we did, the Germans had a Nazis bomb project, and they could have gotten the bomb first.

So, in a sense, in this film we get people to think hard about what America has meant to the world and what will happen if America recedes in importance.

KELLY: Well, we can see just from the beginning of the clip. that we show in the trailer, you know from JFK, to Martin Luther King, FDR, it does -- I mean it really does make you feel patriotic and love so many things that we've done and what we stand for still to this day in the US of A. Gentlemen, good to see you both.