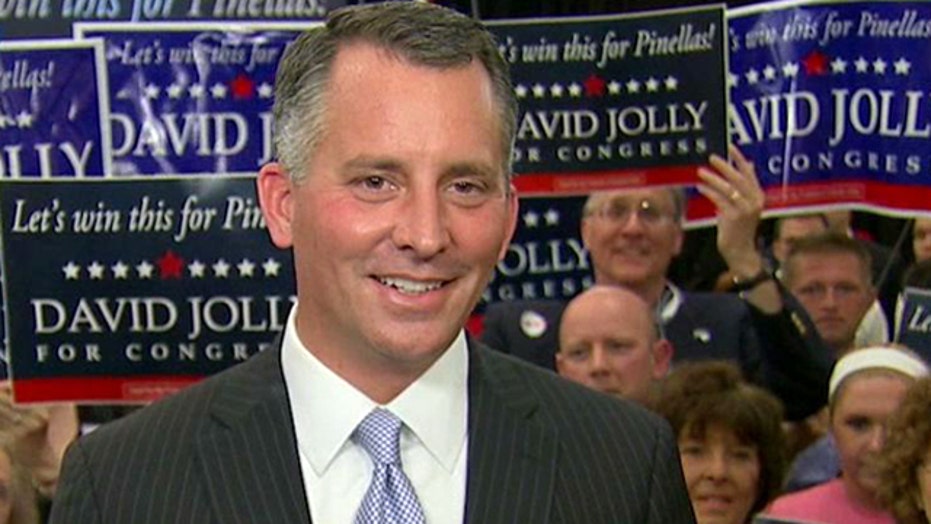 This is a rush transcript from "The Kelly File," March 11, 2014. This copy may not be in its final form and may be updated.

MEGYN KELLY, HOST: Breaking tonight, a Republican celebration in Florida that extends well beyond the Sunshine State, as what is widely viewed as the first real test for ObamaCare at the polls, appears to spell trouble for Democrats in 2014.

Welcome to "The Kelly File," everyone. I'm Megyn Kelly.

A short time ago news breaking that Republican David Jolly has defeated Democrat Alex Sink in a special election for Florida's 13th Congressional district. This is a district President Obama won in 2012 and 2008. A race in which the vice president and former President Bill Clinton both made pitches for the Democrats. And one in which the Democratic candidate outspent the Republican in TV ads by a margin of almost four to one. It was being watch very closely by both sides and Larry Sabato rated it leans democratic. Larry Sabato was wrong.

Now in a "Kelly File" exclusive, the winner joins me live. David Jolly, a Republican and Florida Congressman elect. Sir, great to see you, congratulations on your win, your thoughts.

DAVID JOLLY, R-FLA., CONGRESSMAN-ELECT: Thank you, Megyn, I'm glad Larry Sabato was wrong. This is a great night for us in Pinellas County for the voters here, but you did mention the president's health care plan, and we know that represents a view of government that is a great concern to people across this country. And it's true right here in this community as well. The president's health care plan has hurt the people in this county. A number of people came out to the polls today to express that concern to the president and the Congress.

KELLY: How big a factor was that? I just want to give the viewers a flavor for what we've heard. The Democrats have come out and said that the Republicans -- you, Republicans in this race underperformed, because your message repeal ObamaCare is out of touch. And then the Republicans came out and said one of Nancy Pelosi's most prized candidates Alex Sink was brought down because of her unwavering support for ObamaCare. Both sides agree this election was about ObamaCare. But your thoughts on the Democrats' take on it?

JOLLY: Well, I would challenge that a little bit. This was a local race, I know the national pundits will draw from it what they want. I think we saw some message testing by the national parties, particularly by the Democrats as their candidate's message on ObamaCare kind of evolved throughout the campaign.

So, yes, ObamaCare was an issue, the voters made it an issue. But at the end of the day, ObamaCare just represents a view of government that is put forward by this president and I think many people reject.

KELLY: The other side says, you know, tonight, this is really no big deal. Nancy Pelosi came out and said, the Democrats knew this would be an uphill battle in a district represented by a Republican for the last 58 years. So, for those who say, you know, this spelled trouble for Democrats says, we suggested some are saying in the lead, she's says, no it doesn't.

JOLLY: Well, I think my new colleague Nancy Pelosi might be engaging in some spin control this evening.

I will tell you this. Megyn, I will tell you this, we can't draw a mandate from this race. This was a very closely run race. And I don't know the final percentages. But this was not an overwhelmingly victory. What is important though is that a Republican in a district that President Obama had won twice, a first time candidate going up against a handpicked candidate from out of town, picked by the national party, the national Democrats, with all of the money behind her from the very beginning, they were wrong with their message, they were wrong on the issues. The reason we won this race is because we stood on issues and for a message that is right for our community and right for the future of our country.

JOLLY: Megyn, I hate that question tonight, but the truth is yes, our re-election efforts starts tomorrow. And I need the help of everybody.

Listen, the one benefit of this being a national race is we had people log on to our website DavidJolly.com from all across the country to come out and support us. And we're going to need that going forward. This will be just as close a race in November. This is no easier in November. The only difference is our local community will be spared $10 million in negative commercials come November.

KELLY: Congressman-elect David Jolly, congratulations, thanks for being here.

JOLLY: Thank you very much, Megyn, thank you. I appreciate it. Thank you.