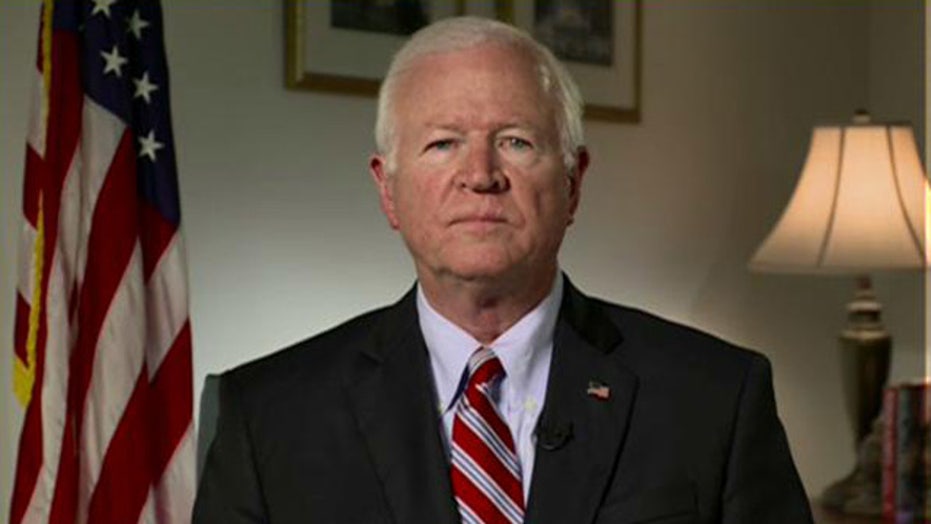 Official: Not certain they can recover information

This is a rush transcript from "The Kelly File," March 20, 2014. This copy may not be in its final form and may be updated.

MEGYN KELLY, HOST: Breaking tonight, senior FBI officials telling Fox News they are about to analyze the flight simulator seized from the home of the pilot of missing Flight 370. You can see it here in the background of this interview with the captain as U.S. Intel agencies continue to take a strong interest in what happened with this plane.

Republican Senator Saxby Chambliss is vice chairman of the Intelligence Committee. And with me now, Senator, good of you to be here tonight, your thoughts on whether the FBI has made any progress with the data that we are told has been deleted from this flight simulator.

SEN. SAXBY CHAMBLISS, R-GA, INTELLIGENCE COMMITTEE VICE CHAIRMAN: Well, I actually spoke with them this afternoon. And what I can tell you, Megyn, is that they not only have the simulator box but they also have some other assets that they are reviewing in great detail. They are very focused on this. They refer to it as being laser-focused, and they're not going to stop. It will be 24/7 until they do all the forensics on the assets that they have including the information that they have got from the simulator. Obviously, they want to see what was deleted and they're going to be able to do that, we think. And there are a number of other assets though that they're also looking at. They're going to share that with the Malaysians as soon as they have it.

KELLY: So, do we believe at this point, that the FBI will be able to retrieve the deleted files?

CHAMBLISS: Well, that is an unknown right now, just like so many other things relative to this airplane, Megyn. But you know, nobody has the capabilities that the United States has when it comes to doing something like this. And as I say, they're not going to sleep until they complete this process.

CHAMBLISS: I'm confident that they're going to be able to.

KELLY: Based on your conversations in the intelligence field. And obviously you're talking to people who are actually in the know, do you believe at this point that we can rule out hijacking or other nefarious conduct on board?

CHAMBLISS: No, absolutely not. I will say that there doesn't appear to be anything that points to either an act of terrorism or hijacking of some sort. But you just simply can't rule that out at this point. We know, for example, that somebody manually turned that transponder off. We probably won't know who did that until we are able to retrieve the black box, if we ever retrieve it. We know that after the transponder went off the plane flew for several hours. Some of that was maybe not totally in a normal flight pattern but it was not the type of erratic flying that would be associated normally with somebody who was committing an act of terrorism. So there are a number of things that they're still analyzing. But there is nothing that points to terrorism or a hijacking. But you simply can't rule that out at this point.

SHARPTON: Let me press you on a point you just said. That we know that the transponder was intentionally turned off. How do we know that? Because there have been others out there saying, perhaps there was a catastrophic event on board the aircraft that led to the shutdown by the aircraft of systems including its own transponder.

CHAMBLISS: Well, those that have examined it and particularly the folks from Boeing, who obviously made the airplane, from what they have been told there just simply is no way that a catastrophic event turned that transponder off. Somebody had to manually turn it off.

KELLY: Wow, I mean -- if that is true, that is a significant development in the case, because if somebody leaned down and turned that off by choice to try to go dark in the airplane, then that certainly, you tell me, raises the possibility of hijacking either by the pilot or a passenger to a considerable level.

CHAMBLISS: Yes, I don't think there is any question about that. And that is why you know, the crew and all of the passengers, the manifest was given to the United States agencies immediately. Or I say immediately, within a day or two. And again, nobody has the capability outside the United States to review the background of those pilots, the crew, as well as the passengers like we do. And nothing has been turned up there, Megyn, at least at this point in time. They're going to continue to review them but nothing really jumped out at them which is really interesting and surprising.

KELLY: And yet we have no airplane. We don't -- nothing was used against us or anybody else at this point. So, you know, if you sort of followed the hijacking plan to its conclusion you have to ask towards what end? What would be the purpose? We had some people on the program speculating perhaps the jet was landed in Pakistan, perhaps that is why the emergency locater transponder has not gone off, because it didn't hit water, it landed someplace and been powered down. Is that something our Intel agencies are considering or looking into?

CHAMBLISS: Well, again, you can't rule anything out. But Megyn that is just so highly unlikely that they would have been able to land that plane and nobody would have heard anything at this point in time. I think it -- I haven't been given any concrete information about the speculation from the analysts. But it looks pretty clear that that plane is in the water somewhere.

KELLY: Do you -- I mean, when you see, you know, the USS Kidd go over there, when you see our resources, the Poseidon go over there and start searching in the Indian Ocean, one has to wind up at the conclusion that we do believe it is in the ocean. Are there any alternatives being considered. Because we have had other experts come on the program and say if we don't find debris from this plane within the next couple of days washing up on some shore, it is probably not in the ocean. Because they say that debris always washes up.

CHAMBLISS: Well, you have already shown some pictures of the area where that debris may have been seen. And it is pretty rough in there. And lord knows if there is an airplane underneath all of that you would hope that some debris would ultimately surface. But at this point in time, you know, we still don't have any concrete idea whether they're looking in the right place. But again, you go back and look at what we do know, Megyn, for example the plane took off headed towards Beijing, which was kind of northeast. We now know that it took a southern turn.

And when you take a southern route, particularly in this case, it took a southwest route, that is consistent with where this debris or potential debris was spotted. So that is encouraging from that standpoint. But again, that is just one more situation that has to be checked out thoroughly. And we shouldn't get our hopes up over this being debris. But it is going to be so difficult to find, even though the equipment we got, that P8, the P3s, they're magnificent weapons systems and do it right job, one naval officer this week, said "with a P8 you can spot a beer can under water." So if it is there I think ultimately we'll find it.