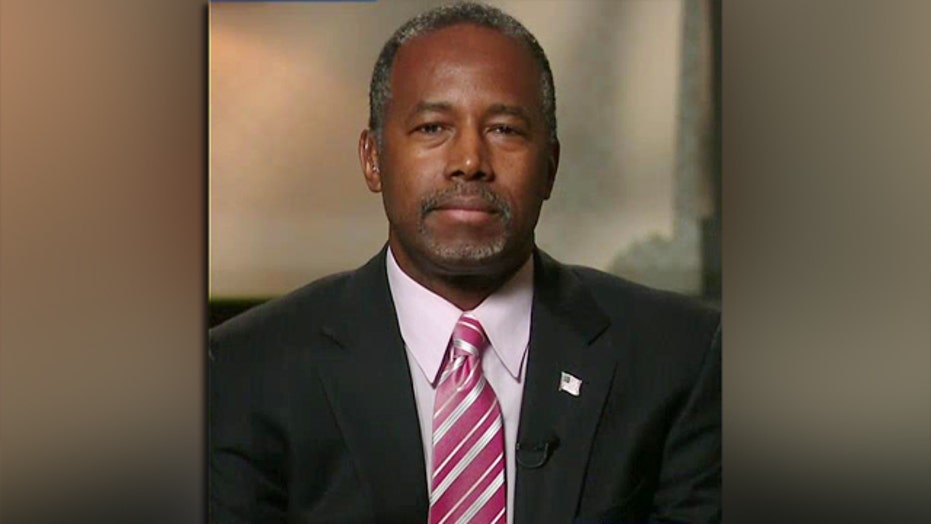 Exclusive: Ben Carson sets his sights on the White House

This is a rush transcript from "The Kelly File," May 6, 2015. This copy may not be in its final form and may be updated.

MEGYN KELLY, HOST: Dr. Ben Carson announcing this week that he is officially running for president. The very idea of a White House bid for Dr. Carson might once have been unthinkable for those who witnessed his childhood. But Ben Carson's remarkable story is one of beating the odds and then some.

KELLY: Born September 18, 1951, in Detroit, Ben Carson's childhood was anything but ideal. The second son of Sonya and Robert Solomon Carson, his family lived in inner-city Detroit. They were extremely poor. When he was 8 years old, his parents split up. His dad was leading a double life with another wife and children. As Carson writes in his book "Gifted Hands," his father's departure was devastating.

BEN CARSON, 2016 U.S. PRESIDENTIAL CANDIDATE: "I don't know how long I cried. I only know it was the saddest day of my life."

KELLY: His mother was left to raise the boys on her own. She had only a third grade education. Still, she was determined her sons would beat the odds, but Carson wasn't exactly a model student. He was much more interested in playing outside or watching TV than studying. So, she came up with a plan.

CARSON: There was a turn off the TV, let us watch only two, three TV programs during the week. With all that spare time, read two books a piece from the Detroit Public Libraries and submit to her written book reports which she couldn't read, but we didn't know that.

KELLY: Soon Carson started to love reading and went from the bottom of his class to the top. But Carson nearly lost his future when at age 14 he tried to stab another boy. The blade only stopped by a belt buckle.

CARSON: I recognized at that moment that I was completely and totally out of control. And I went home and shut myself up in the bathroom and I started praying and asking God to take that temper away from me.

KELLY: From that day on, Carson says he was a changed man. He went on to earn a scholarship at Yale University, where he met his wife, Candy. Together they raised three sons. After Yale, it was on to medical school and eventually a residency at one of the best hospitals in the world, Johns Hopkins. It was there Carson made medical history, at age 33, becoming the youngest physician ever to head a major division at Hopkins.

In 1987, he and a team of doctors became the first to successfully separate twins joined at the back of the head. The story was later told in a film about his life starring Cuba Gooding, Jr.

CUBA GOODING, JR., PLAYED BEN CARSON: Which child would you like to see first?

KELLY: In addition to the countless lives he has saved, Carson and his wife have changed the lives of thousands through their Carson Scholars Fund, a scholarship program that awards students who excel academically and who give back.

In 2001, the Library of Congress named him a living legend. In 2004, President Bush appointed him to the President's Council on Bioethics. Two years later, the NAACP paid tribute to him with its highest honor. And in 2008, President Bush awarded him the highest civilian honor in the land, The Presidential Medal of Freedom.

But it was his speech at the National Prayer Breakfast two years ago that turned him into a conservative rock star, with President Obama sitting just feet away, Dr. Carson attacked the current health care system, political correctness, and compared today's America to ancient Rome.

KELLY: Almost immediately, some said, he should run for office. An idea he initially dismissed. That same year, he retired from medicine, but instead of walking off into the sunset, the good doctor had a change of heart. In his hometown of Detroit, Ben Carson made his White House bid official.

CARSON: I'm Ben Carson, and I'm a candidate for president of the United States.

KELLY: And joining me now, Dr. Ben Carson, presidential candidate. Dr. Carson, great to see you. Congratulations on your announcement, and what an incredible story that I think many people may not have known had they not read your book.

Let's start with what happened with your father. He was a bigamist and your mother left him, or he, you know, they -- they separated when she found out. How did that affect you?

CARSON: Well, obviously I was devastated as any child would be. And, you know, prayed every night, "Please help them to get back together." Not really realizing why the divorce had taken place. And it was really some years later before my mother really gave us the full story of what had happened, because she didn't want to demonize him in our eyes.

KELLY: Did you ever see him again?

CARSON: Yes. The last time I saw him was the day that I got married. He died many years ago.

KELLY: Wow. And did you ever have any contact with the other family?

CARSON: I did, but I didn't know who they were.

CARSON: So sometimes on Sunday morning he would take us and we would visit these people. I didn't really know who they were until much later.

KELLY: That's incredible. And -- and just reading up about you, you can't escape the profound influence that your mother had on your life and on really saving you from an alternate existence. And I know that you said the most important thing.

KELLY: -- that she did for you, and she did so many, was she taught you not to accept excuses. Explain that.

CARSON: Well, she refused to be a victim herself, and every time that we would come up with an excuse, out of her mouth would come the poem, "Yourself to Blame."

CARSON: And pretty soon we got tired of hearing that poem, so we stopped looking for excuses. And that says (ph) why I think it was so important, because, you know, all of us have a lot of obstacles in our lives, a lot of problems and if we can find an excuse, then we can wallow in that and we don't have to do anything about it. And generally, people who always blame somebody else for something are people who don't accomplish very much.

KELLY: That poem is by Mayme White -- Mayme White Miller. You -- you mentioned it before.

KELLY: I actually have it now printed out, it's on the wall of my office. I encourage all the viewers to do the same because it's a very empowering message. But I want to ask you about whether you do think today in America we are cultivating a victimization culture.

CARSON: Oh, without question. And it's inner-generational now, and it molds itself into an entitlement mentality where people think that they are old in existence. And what we really owe people is an opportunity. And we have to re-instill that can-do attitude that is so important in our nation. It's what drove this nation from no place to the pinnacle of the world, and the highest pinnacle anybody else had ever reached.

And it doesn't have anything to do with one's ethnicity. It has to do with the American spirit. Somehow we must bring that back. There are those who like to criticize America, tell us that we're an evil place because we had slavery, because we had Japanese internment camps, you know, we bombed Hiroshima, Nagasaki. We exterminated Indians.

You know, give me a break. Every country that's inhabited by human beings has made mistakes. The key is to learn from those mistakes.

CARSON: -- and to move on. And -- and if you say America is not exceptional, then you're living in an alternate existence.

CARSON: -- because before this country came along, people did things the same way. Within 200 years of this country, men were walking on the moon.

KELLY: We accomplished quite a bit. Let me ask you, you clearly have a can-do attitude, but people look at you and they say, "All right. He's not a politician. He's not a military commander. He's not really even a business guy." So, how does a doctor run the United States of America?

CARSON: Well, you know, a lot of people think that the only experience you can have is political experience, but the fact of the matter is, I've had a tremendous amount of experience in doing complex things, and in working with a lot of different people to do complex things. I've had a lot of experience in the business world. You know, I've sat on the Kellogg Board for 18 years, Costco Board for 16 years, as well as a number of other boards. Started a nonprofit, my wife and I. You know, as you know, nine out of 10 nonprofits fail. Ours not only didn't fail, it's active in all 50 states. Won a couple of big national awards. We don't do it for the awards. We do it for the effect that it has on young people. We put in reading rooms all over the country, particularly in Title 1 Schools where --

CARSON:  -- kids come from homes with no books. They go to a school with no library. They don't learn how to read. Seventy --

KELLY: So, what about -- what about foreign policy? Is that something you admitted that you don't know much about and you're studying up on it? So, why should the country in this day and age entrust foreign policy to a self-admitted novice on the issue?

CARSON: Well, I've learned an enormous amount about foreign policy in the last few months. So, I'm ready to talk about it any time anybody wants to.