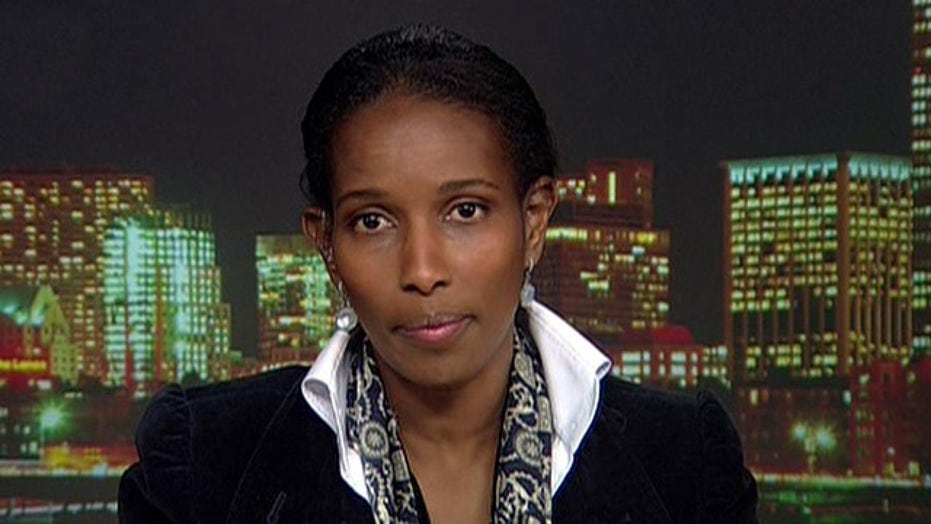 This is a rush transcript from "The Kelly File," April 9, 2014. This copy may not be in its final form and may be updated.

MEGYN KELLY, HOST: We're joined by the woman at the center of this. Ayaan Hirsi Ali is a fellow at the Belfer Center for the future of diplomacy at the Harvard Kennedy School and my guest now. It's very good of you to be here. Thank you very much, ma'am.

First, can I get your reaction to that exchange that I just had with Mr. Hooper?

AYAAN HIRSI ALI, HARVARD KENNEDY SCHOOL, BELFER CENTER FELLOW: Well, first of all, Megyn, I really do appreciate. I want to say kudos for calling Mr. Hooper out on all of these things. I have -- I mean, boo is very gentle but for the last 12 years, I have systematically been condemned by Muslim individuals, Muslim organizations, relatives, any time that I bring up the treatment of women in Islam or the link between violence, and violence justified in the name of Islam. It's Muslims who commit violence either against women or others who bring the Koran and the Hadiff and the context on the table.

And every time, I say, hey, it's impotent that we talked about this. I was brought up in the religion of Islam. It is my father and my mother's morality. I understand the risk. Let's talk about it. You have people like these organizations Cooper CARE and Mr. Hooper who deny this. And frankly, I don't think that Mr. Hooper speaks for Muslims. I don't think that he speaks for Muslim women because as you see on the film "Honor Diaries" and as you see in the general use, there is a lot of violence going on in Muslim countries and amongst Muslims as immigrants in western countries. That should be addressed. I don't think they are the right people to do it. I think we are the right people to do it. If for once, Americans --

KELLY: Let me ask you this because what he was saying and what Brandies University used as its excuse to pull your honorary degree and boot you out of the commencement ceremony was other statements. They claim you've been too general in your criticisms of Muslims and of Islam claiming that you've said, violence is inherent in Islam. Islam is the new fascism, it's a destructive cult of death. They claim that Brandeis University, those statements were a bridge too far.

ALI: I have given a numerous interviews on the subject of Islam, Islam on the west, Islam on women, Islam and violence in the past 12 years. What these students have done in which they do, I'm absolutely used to it, is they take lines from various interviews. I mean, the magazine was in 2007 and then they tie all these things together to fit their own narrative. What the Muslim organizations and the student protest groups have done, that doesn't surprise me. I'm used to it. Everywhere I go, every single time I do a public speaking, I meet with some form of process along those lines.

What surprised me is the decision by Brandeis first to say, you know, we want to give you this honor. We know what you do, and in the age of Google, all of that is out of there. It's all public. And to come around and say we really didn't know some of these things, I think it's a very feeble excuse.

But I don't want this to distract us from what I wanted to say during that commencement, which is to tell these students how incredibly privileged they are, and especially the female students amongst them, that they are growing up in a world that is free where they have proper education. And that the way to get to a better world, a world of peace, is to get the ability as young people, to learn how to think critically.

And I know that my presence for the Muslim students in Brandeis and other universities is offensive, it's maybe whatever they call it insulting, sometimes they call it, it is controversial. But I thought that's exactly what universities are for. We send our kids to school, so that they can be confronted with ideas that they are not comfortable with.

KELLY: Do you feel that Brandeis is engaging in a double standard because they have given honorary degrees to some controversial figures including Tony Kushner and others, and they, you know, people have pushed back against them for making some comments that have been perceived as anti-Jewish and yet, there was no problem, they gave them degrees and not you. Not more over, you know, Ahmadinejad went and spoke at Columbia University, I don't remember CARE objecting to that.

ALI: I think if you insult Jews in this country, if you insult Christians in this country, if you insult Mormons, I watched the "Books of Mormon," you will get people who will write to you about their outrage, but there is always this fear that if you insult Muslims, there is going to be some kind of violence repercussion. That may have been part of the decision to do that, but they are not doing their students any favors and they are not doing the Muslim students any favors because to really be a simulated into American society, to become American is to accept the idea that you can have a robust debate and there is no other place better to do that than on university campuses, and the decision of Brandeis University is really regrettable, it makes me sad.

KELLY: Well, Mr. Hooper and I got into it about what our First Amendment really stands for and whether it's about shutting down speech or allowing it. That part will air tomorrow night.

You're a brave woman. I know you've been threatened specifically with death a number of times. It's outrageous, and we appreciate you and your courage in coming on the broadcast tonight.

ALI: Thank you very much.