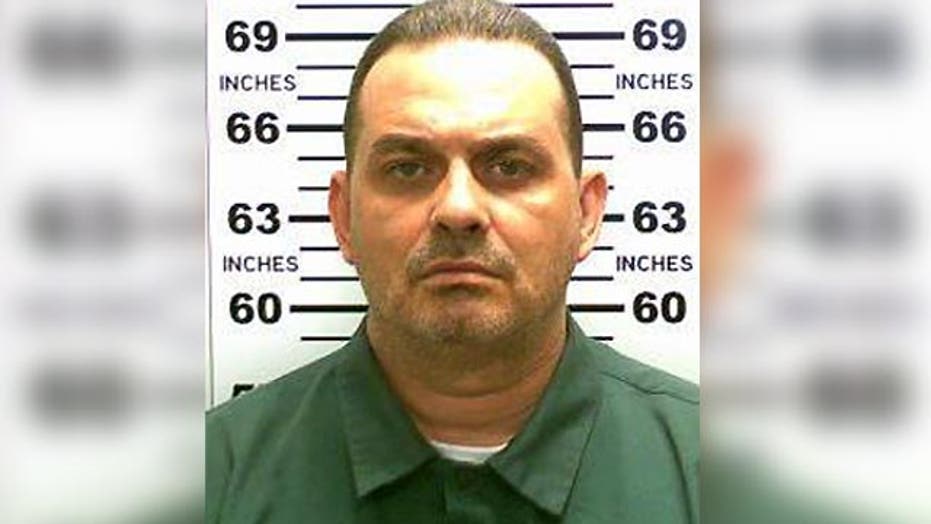 Half-brother of escaped killer: Turn yourself in

Wayne Schimpf has a message for his fugitive half-brother Richard Matt, whom he fears will come after him

This is a rush transcript from "On the Record," June 9, 2015. This copy may not be in its final form and may be updated.

GRETA VAN SUSTEREN, FOX NEWS HOST: This is a FOX News alert. Two killers loose. And news breaking that new police have tracked them. They don't have them, but they are hot on the trail to a small town less than 40 miles from the maximum security prison these two killers escaped from. At this hour, police, sheriffs, federal marshals and FBI agents all convening in Willsboro, in New York. A small town with a population of about 2500.

ON THE RECORD is on the case. And you will hear from the reporters live from the scene in just minutes.

But first, the brother of one of the fugitives, Richard Matt, the cold-blooded killer, who is now on the loose. His half-brother testifying in court that Matt bragged about dismembering his victim with a hack saw.

Moments ago, Richard half-brother, Wayne Schrimpf, went ON THE RECORD.

VAN SUSTEREN: Wayne, thank you for joining us.

WAYNE SCHRIMPF, HALF-BROTHER OF RICHARD MATT: You are very welcome.

VAN SUSTEREN: Wayne, I know your brother is dangerous because he has killed before, but he is on the loose right now. If he has the opportunity, will he kill again, do you think?

SCHRIMPF: In my opinion, I believe he would.

VAN SUSTEREN: And why do you say that?

SCHRIMPF: He threatened to kill me and he has killed others before. So I would not put it past him. He is a dangerous man.

VAN SUSTEREN: When is the last time you spoke to him?

SCHRIMPF: Right before he ran from Mexico when he stole my van and went down there.

SCHRIMPF: He is actually two different people. If you met him in a normal setting, he would charm the pants off of you and you would just think he was a great guy. And then when he wants to do something like what he did, there is a switch and there's just something in his eye. He's the only man I have ever been afraid of. He gets this pure evil look on him.

VAN SUSTEREN: Did he discuss with you the dismemberment of his murder victim?

SCHRIMPF: Yes, he did. He called me to his house and I went over and he came out and sat in my van and showed me a news article, and I said, is this for real? And he said yes. And I asked him, well, how did you do it? And with this grin that was just so evil that I will never forget he turned and looked at me and said with a hack saw.

VAN SUSTEREN: And you said what?

SCHRIMPF: I actually was kind of speechless. I didn't know what to say at the time. I mean, what do you say to somebody who, you know, that just told you they killed somebody and cut them up with a hack saw?

VAN SUSTEREN: Do you have any idea where he might be headed and do you worry that he is coming for you? Because you testified against him.

SCHRIMPF: Yeah. I'm very worried that he is coming this way because one of the last things he said to me is, you are my brother, I love you, you are blood, but if you turn against me, I will kill you. At the time, my wife as well, he threatened to kill us both.

VAN SUSTEREN: How did you even learn that he had escaped? Did the police call you or did you hear about it on the news?

SCHRIMPF: Actually, I heard it from my son who heard it on FOX News.

VAN SUSTEREN: Is he a smart guy? Is he really going to give the police a run for their money as he flees?

SCHRIMPF: I believe so, yes. He has escaped from other prisons before. After I had to testify against him, I asked the police, what happens if he escapes? And they said, oh, that will never happen. I said, well, I don't believe that. And now my worst nightmare has come true. He has escaped. And I have to sit here and worry if he is going to come and try to kill me.

VAN SUSTEREN: Did he say anything to you in the courtroom when you said anything against him? Did he stare at you?

SCHRIMPF: Yes, yes. One thing I found very strange was they took a short recess, and the only ones that were left in the court was myself sitting on the stand and him and his lawyer at the defense table and he actually spoke to me telling me that our other brother in Florida was in a car accident and died.

VAN SUSTEREN: And that was true or false?

SCHRIMPF: Well, I found out today through the Buffalo newspaper that that story -- I don't know about the car accident but the story of him being deceased is true.

VAN SUSTEREN: All right. So, anyway, your brother is on the run. You are afraid of him. You are worried he is coming your way. And he is likely to kill again, is your thought?

SCHRIMPF: I believe so. I really do believe so, because he has nothing to lose at this point.

SCHRIMPF: And he has killed before, so I don't see why he would not do it again.

VAN SUSTEREN: Wayne, thank you very much. I hope your brother is picked up very soon. Because, obviously, he is a very dangerous man and he needs to be in custody, pronto.

SCHRIMPF: If I may say one thing?