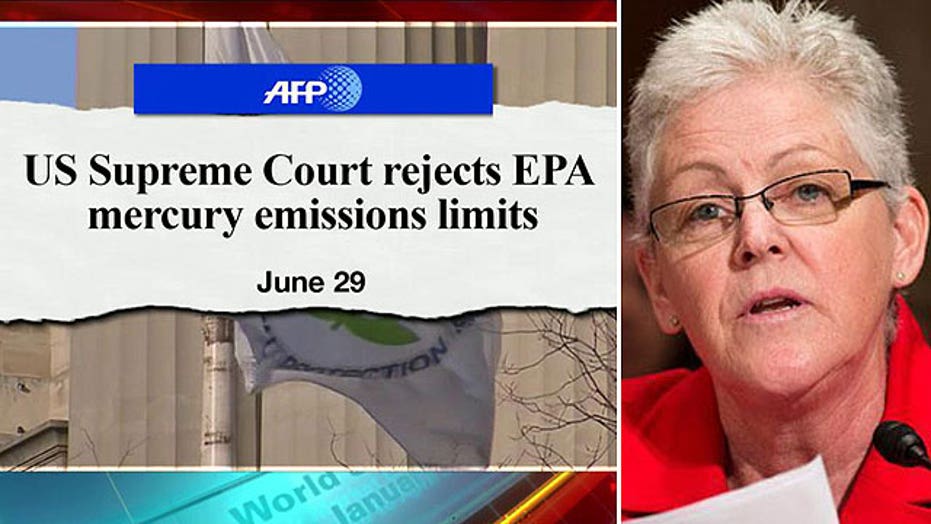 This is a rush transcript from "Your World," July 8, 2015. This copy may not be in its final form and may be updated.

NEIL CAVUTO, HOST: Remember when the Supreme Court told the EPA to kind of cool it on all these regulations, that it at least had to consider the cost of its rules before it willy-nilly enforced those rules?

Well, now the head of the EPA just said, you know, no, kind of.

Senator, always good to have.

But, effectively, what the EPA administrator said is, we're still going through with some of the other stuff, the Supreme Court be damned. I think I'm getting to the gist of her take on this.

You can't do that, can you?

I think the Supreme Court has resoundingly said that the EPA's overstretched, and this administrator is a part of that. There's a big rule coming out, the clean power plan, that's going to have even bigger economic effects. And they still haven't considered that.

So, I think it would be strike two for the EPA. But worse than that, the damage that was done by this first rule, if the EPA moves on, could be even further damage before the court would even have a chance to rule on this.

CAVUTO: All right. So, in other words, you can force whatever you want and then go ahead and take a risk with the court. But by that time, this administration is out of there.

Now, EPA chief, Gina McCarthy, was saying this about that court ruling, that last week's ruling -- I'm quoting here, Senator -- "will not affect our efforts. We are still on track to produce that plan this summer. And it will cut carbon pollution that is fueling climate change from power plants."

That does not sound like a woman who is easing up on this whole cost issue and weighing that into issuing regulations as to how much you're going to enforce those regulations.

CAPITO: Well, you know, what I haven't seen from her is what is the cost of this new regulation that she's moving forward on without regard to what the Supreme Court has already ruled in her former regulation?

I think that's an issue. Damage has been done to the states. People have lost their jobs. We are never go to recover these jobs back. I think they need to step back and start over and look at what the economic ramifications are from the rule, like the Supreme Court said they must if they're moving forward.

The other thing, Neil, you have got to remember is, we have as members of Congress ability to stop appropriations, to be able to hold rules at least for a year. And I think that's what we're going to see if she decides to move forward.

CAVUTO: So, a little bit of tit for tat here.

You know, all things get back to politics, as you know, Senator, sometimes, try as you might to prevent that. But Democrats are already saying of Republicans, boy, they're the party of dirty. They're for dirty air. They're for nasty emissions. They're for ignoring the threat of the whole world heating up like a firecracker, and that whatever victory you win in the Supreme Court on whatever argument you're making about how much it's going to cost, people are going to die and the Republicans are the party of death.

CAPITO: Well, my response to that would be is, why are we going to listen to the Supreme Court when they uphold Obamacare and then, when they come back and say you have to look at economic benefit balanced with environmental benefit, why, that's no longer a good...

CAVUTO: You know what? That's an excellent point, Senator.

CAVUTO: If you're going to honor the court's wishes there, you should be consistent.

But they're not doing that, Senator. The EPA is saying we're going to keep doing what we're doing.

CAPITO: Right. That's because time is running out for them. They know that this administration is coming to an end.

We have begged the EPA to come to a state like West Virginia, which is heavily impacted. And basically they have turned their nose up at us, because they know that we have got lost jobs, communities that are shutting down. Our power prices are going up.

But let's make commonsense regulations. And that's what I think makes more sense for our economy and our environment.

CAVUTO: Senator, good seeing you again. Thank you for stopping by.