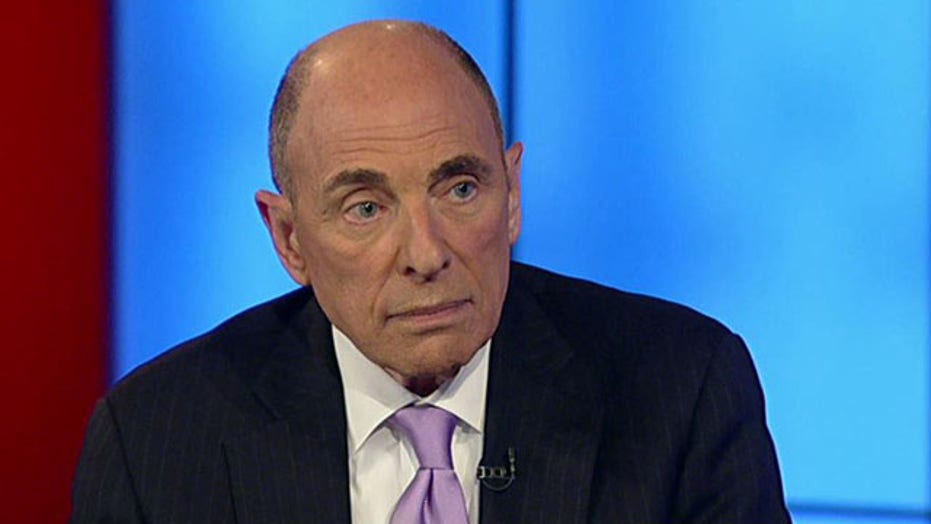 Author looks into the relationship between the Obamas and the Clintons

This is a rush transcript from "Hannity," June 23, 2014. This copy may not be in its final form and may be updated.

SEAN HANNITY, HOST: My next guest is making waves by claiming that the two most powerful families in the Democratic Party just don't get along, and that the relationship between the Clintons and Obamas has devolved into a downright venomous grudge match.

Joining me now to discuss his brand-new book, his first TV interview, "Blood Feud: The Obamas vs. the Clintons," (ph) is author Ed Klein. How are you?

HANNITY: You were the editor of what, Newsweek for 12 years?

HANNITY: The left hates you. Every time you do a book, I do an interview with you, it's like massive attacks against you.

HANNITY: So you're ready for it this time.

KLEIN: Expect it to come any moment. It hasn't yet.

HANNITY: You're just doing the...

KLEIN: Slime just comes at you, you know?

KLEIN: And you duck.

HANNITY: Interestingly, your book today was ahead of Hillary's, which just came out!

KLEIN: Says something about Hillary as much as it does about my book.

HANNITY: OK. So Michelle Obama and Valerie Jarrett, you claim, have a nickname for Hillary.

KLEIN: Hildebeast, after the menacing gnu that roams the Serengeti in Africa.

HANNITY: All right, so the first thing -- because I read through the book. I see you sourced the book, but a lot of these are unnamed sources.  That's where you're going to get attacked. What is your answer, especially on issues of knowing about Hillary's health, unnamed sources, Bill Clinton on Obama, I hate that more than any man I've ever met.

KLEIN: There's a couple things to say about that. One, I've been following the Clintons for 10 years. I've got great sources. But two, what people don't really understand when they say, why do they talk to you?  They talk to you because they want to boast about the fact that they're close to power, and they want to tell you how important they are. And then they also want to get their point of view across, as well.

HANNITY: But other news media source does this all the time, but when you do it, you're attacked more. Do you think that's unfair?

KLEIN: But you know, it comes with the territory. I think what I do is get more into the personal lives of these people than a lot of the other political books do.

HANNITY: You talk about Hillary's health and age, and you go into great specificity. How could you possibly find out about her health?

KLEIN: I talked to people who were in the hospital room when Bill came out of his interview with her doctor, Alan Schwartz (ph), who, by the way, I tried to call, but wouldn't talk to me, naturally, because of confidentiality.

HANNITY: Right. But you tried.

KLEIN: And Bill at that time revealed that Hillary was told by her doctors that she had heart valve problems and that they were considering doing heart valve replacement surgery. They decided against it, but Bill was told -- and this is in front of not one but two or three people -- that she had to be monitored for the rest of her life.

HANNITY: All right, going back to this Bill Clinton/Barack Obama hatred -- it's pretty interesting. When Bill Clinton said, they played the race card on me and they planned to do it from the very beginning, he never got over that, did he.

KLEIN: Never. And he -- to this day, he talks about it almost, like, compulsively. How could they play the race card on me? I mean, he keeps on talking about it. He considers himself still the first black president, even though we now have a real black president.

HANNITY: See, I have a friend of Bill Clinton's, and I'm not going to say who, has told me he thinks that Obama is -- is the most incompetent person he's ever seen in politics. Is that true?

KLEIN: That's true. And Bill has said that repeatedly in private conversations among his friends and associates, that this guy is, as I once called him, an amateur. He's over his head. He's incompetent and he's constitutionally unable to really manage things.

HANNITY: And you explain in the book was a deal, that the reason that Bill went so heavily for him in 2012 is because?

KLEIN: They agreed during a golf game that Bill would go all out for Obama in 2012, even though he didn't like him and didn't think he deserved reelection, and he said so, if in return, Obama would promise to back Hillary in 2016. And that was the deal.

HANNITY: And there was a big battle you chronicle in the book about how Obama wanted Hillary to take the fall on Benghazi, and Bill was adamant, no way.

KLEIN: Yes. What's never been reported is that after the president called Hillary on that night...

KLEIN: ... when our attack -- when you Benghazi mission was being attacked, and told her that he wanted Hillary to put out this cockamamie story about a video, she called Bill and told him that. Bill was in Little Rock at the time. He said, you can't do that. And they discussed what she could do. And they decided that she couldn't say no to the president because if she did, or if she resigned, the Democrats would they never forgive her, and this would hurt her chances in 2016.

HANNITY: Let me go back to the health issue of Hillary for a second because Bill Clinton himself said it took her what, six months to recover.

HANNITY: And you say she's fainted other times.

KLEIN: That's right. And -- but, you know, I'm not a doctor, and I couldn't talk to her doctor because he wouldn't, obviously, talk to me.  But other doctors have told me that this is a condition that has to be watched. It doesn't mean -- I don't want to say that she is therefore incapable of running for president. But like other people who have had physical ailments, she has to come clean with her medical records...

KLEIN: ... so the American public can judge.

HANNITY: Do they or don't they? I mean, I don't think we ever got Clinton's medical records himself. I think this is important. They've only had one dinner together at the White House, you said, only one?

KLEIN: Michelle and Valerie Jarrett, her best friend, tried to keep the Clintons out of the White House...

HANNITY: In other words, he may sway him?

HANNITY: So Obama ignored them when they went to dinner.

KLEIN: Obama took out his Blackberry -- this is not one, this is an iPhone -- and started playing with it under the table while Bill was talking...

HANNITY: To send a message.

HANNITY: What about -- you talk in this book about Michelle and Barack's relationship. They're not getting along, you say.

KLEIN: They sleep in separate rooms. When they go on vacation they occupy separate wings of their rented house. When Barack is talking about certain things that Michelle is not interested, she puts her earphones on and doesn't listen to him and tunes him out. They go separate ways when they're on vacation. It is not what I call a warm and fuzzy relationship, although have I to say I think he loves his wife.

HANNITY: You think she's jealous of him?

KLEIN: I think she's very jealous of him and feels that he isn't doing as good as she wants him to.

HANNITY: We're going to have more tomorrow night. You're going to be back. Ed Klein, good to see you. Thank you.