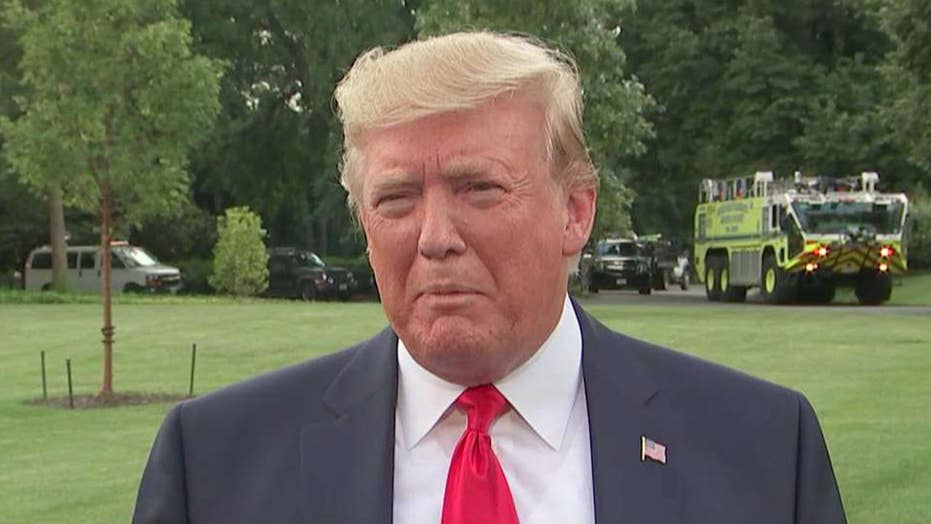 This is a rush transcript from "Special Report with Bret Baier," August 1, 2019. This copy may not be in its final form and may be updated.

PRESIDENT DONALD TRUMP: We've taxed China on $300 billion worth of goods and products being sold into our country. And China eats it because they have to pay it, because what they do is they devalue their currency.

My people came back, they're going to meet again in September. I said look, if you meet, that's great. But in the meantime, they are going to pay a tariff.

SEN. KAMALA HARRIS, (D-CA) PRESIDENTIAL CANDIDATE: This president has been highly irresponsible on many levels and on many issues, including trade. He came in office saying he was going to take care of the farmers and the auto workers. Yet, he proposes trade policy by tweet.

BRET BAIER, ANCHOR: New tariffs on China after a briefing today from the treasury secretary and Robert Lighthizer, the trade representative, after their meeting in Shanghai that essentially fell apart. They were at the White House, and then they briefed the president that it wasn't looking so good. According to our friends at FBN, Chinese sources tell us that the directive in Beijing is to decouple from reliance on the U.S. The Chinese refused to put back in any of the concession language they deleted out of the trade deal. Chinese sources also say they don't care about the election in 2020. They think Trump is unreliable and feel the Democrats would be just as bad, so China wants to pull away from reliance on the United States." It could be posturing. Who knows?

Let's bring in our panel: Charles Lane, opinion writer for The Washington Post; Mollie Hemingway, senior editor at The Federalist, and we welcome back Fox News contributor Steve Hayes after a year in Spain with his family. Bienvenido.

HAYES: I think what we've seen today, in my view, is why trade wars aren't good in the first place. They're not good and they're not easy to win. The administration is right that the Chinese didn't make good on their promises to buy more U.S. agricultural products, at least not in the way that the Chinese suggested that they would. That leaves the president and the administration having to respond in some way or another, and this is the way they are choosing to respond.

I think the president is wrong when he says 10 percent on $300 billion is a small number. That's quite a big number. I think if you look at the rest of the consequences of the trade war overall, they're not good consequences for the United States, $20 billion in revenue overall, that's not getting a lot of money back from the tariffs themselves. You've seen bailouts to farmers in a way that small government conservatives have traditionally opposed. You've seen farm bankruptcies increase. That's problematic for a wide variety of reasons. And I do think Kamala Harris is right is that narrow sense the president is breaking his promise to those farmers.

BAIER: I asked Senator Josh Hawley from Missouri about this, I talked to him. We are going to air part of that interview next week. But here's what he said on the tariffs today.

SEN. JOSH HAWLEY, (R-MO): I think we've got to confront China and we have got to get them to start abiding by real trade agreements.

BAIER: Even if it hurts farmers in Missouri?

HAWLEY: Farmers in Missouri I think are unfairly being targeted by the Chinese regime for retaliation. I think the president is doing the right thing to stand by them. But let me tell you what farmers tell me, which his that they feel like they they have gotten the short end of the stick from China for years. They want a level playing field, and they are for doing what it takes to get that level playing field.

MOLLIE HEMINGWAY, SENIOR EDITOR, "THE FEDERALIST": I don't think anyone likes trade wars. It's not something you like for its own sake. But we have a problem with China, and it's a long intractable problem that has gone on for decades. There are short-term costs for engaging in a trade war with China in the hope of long-term benefits. And so this is a couple months ago there actually was a setback with China not -- we thought we had a deal and they backed out of it. They made some pledges that they didn't fulfill, and so this is the follow-up to it.

But the idea is to keep China from its unfair trade practices which harm Americans and have harmed Americans for many decades. And if there's a better solution for how to get China how to behave better and how to not be so unfair with American producers, farmers, and what not, people should start offering those. Otherwise we are in the middle of something. We need to put the pedal to the metal to force China to make some concessions.

BAIER: Chuck, those Chinese sources quoted by FBN, it seems to me a bit of posturing, because everything I hear is that it is really hurting China, and can they replace a market like the U.S., which is a huge market?

CHARLES LANE, OPINION WRITER, "WASHINGTON POST": I don't think the Chinese probably know exactly which way to turn right now. I think there's a lot of tension within their own government about what the right course is. But that may explain why, notwithstanding what he said out there, the president's measure does not take effect immediately. The tariffs don't actually go into effect until September 1st, just before the second round of talks are supposed to start. And in the past he has threatened tariffs and not imposed them at the end when the Chinese have actually come through with some sort of concession. I'm just saying that so that we're all prepared for the possibility that some minor deal will get done.

The final point about that very interesting word "decouple" that the Chinese are throwing it around, that was an American word. There's a lot of people around President Trump, Peter Navarro, folks like that, who think it's time for us to decouple from China. And I think they are trolling the Trump administration a little bit by floating that term. They're sort of like, do you think you don't need us? OK, well, we don't need you. And the danger here is that everybody is going to get what they want and we really will decouple, and that will increase a lot of the trade tensions around the world.

BAIER: In the meantime, on Iran it seemed like the U.S. had the boot on the neck of Iran economically with sanctions. Now the waivers -- Morgan Ortagus issued a statement, "Secretary Pompeo has continued restrictions on the Iranian regime's nuclear program. This actually will help preserve oversight of Iran's civil nuclear program, reduce proliferation risk, constrain Iran's ability to shorten its breakout time to a nuclear weapon, prevent the regime from reconstituting sites for proliferation sensitive purposes." However, essentially they are letting these civilian nuclear programs go forward.

HAYES: I think this is problematic. If you look back at the way the United States constituted the JCPOA, the original Iran deal, this was part of what the Iranians wanted. And if you goal is to dismantle the Iranian nuclear program and put maximum pressure on the regime, this is not the way to do it. Obviously, you're giving them an out, at least for 90 days. It's maximum pressure with an asterisk.

HEMINGWAY: I think, though, that the sanctions are working, the approach has been working. And we are in a situation with Iran where they don't have many options, and you don't want to corner an animal where it feels like it has to lash out. That interview you had with Secretary Pompeo last week I thought was so interesting where he had been criticized as the U.S. not being tough enough on Iran. He says this is absurd, that what we are doing is working, but you don't want to give them no option for maneuvering unless we get involved in yet another really bad conflict in the region.

BAIER: Quickly, Senator Mnuchin was believed to be behind this civilian nuclear softening, Pompeo and Bolton not as much.

LANE: Yes, there's obviously a big argument within the administration about how tough to get. I see it as part of actually a pattern, the president under the headline of maximum pressure every so often shows some restraint. He did that with the shootdown of the drone, and now he's doing it again.