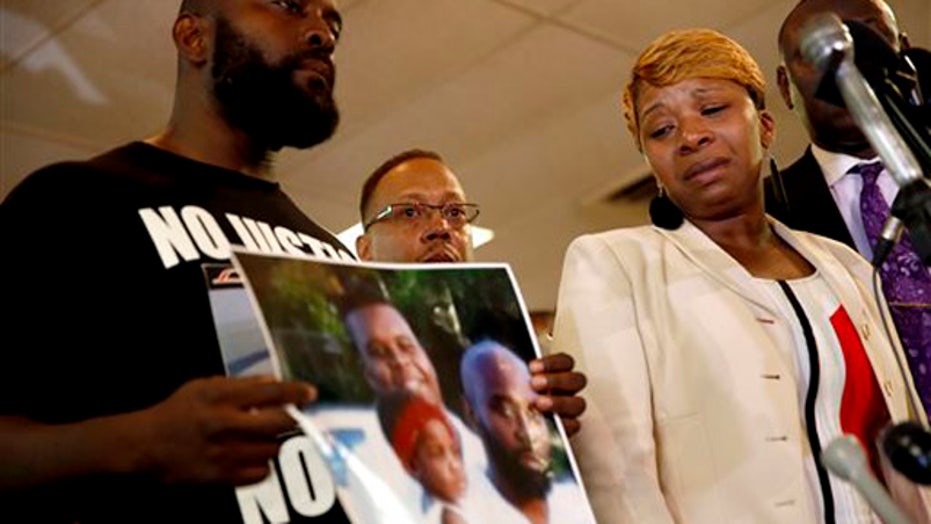 Philosopher reacts to the outrage

This is a rush transcript from "Hannity," August 12, 2014. This copy may not be in its final form and may be updated.

BENJAMIN NETANYAHU, ISRAELI PRIME MINISTER: This is a danger I've been pointing to. It's not a spin. It's not a whim. It is a clinical diagnosis of a pathological movement that is sweeping our area but will soon come to a theater near you. It has to be stopped now. The ones who are standing right now in front of this tsunami IS Israel. Support Israel, support yourself.

SEAN HANNITY, HOST: Joining me now to recap that interview is the professor of philosophy and Christian practice at Union Theological Seminary, Dr. Cornel West is with us again. It's good to see you, my friend. How are you?

DR. CORNELL WEST, UNION THEOLOGICAL SEMINARY: Nice to be in conversation with you.

HANNITY: He said it's pathological. Here's what Israel is surrounded by. Hamas, their charter says obliterate Israel, and kill the Jews, that's what their charter says. Hezbollah, then you have Boko Haram.  And then you have ISIS, ISIL. You've got Al Qaeda and Islamic Jihad. You have the Muslim Brotherhood. Surrounded by people that buy into the idea that there ought to be a worldwide caliphate, kill the Jews, destroy Israel, wipe it off the map, and I didn't even mention Iran. What are they to do but defend themselves?

WEST: The "they," you're talking about who?

WEST: Your mean the Israeli brothers and sisters. One is you have to make sure that you have an Israeli society that doesn't put a stress on militarism and racism. You can't have a right wing government that allows for the killing of 427 precious Palestinian babies --

WEST: You and I agree, a precious Palestinian baby has the same value as a precious Jewish baby. As Christians, we believe that, right?

WEST: I'm going to tell you what they ought to do. One is you've got to end an occupation of 46 years and a blockade.

HANNITY: They already gave them back Gaza.

WEST: They didn't give Gaza back. They still control the land, sea, food supplies, medical supplies, all the food going in. It was a political --

WEST: It's not blaming Israel, it's a matter of acknowledging that terrorism --

WEST: The terrorizing of Israeli brothers and sisters is wrong.

HANNITY: Palestinians have voted in Hamas --

WEST: The killing of Palestinian innocent people is wrong across the board.

HANNITY: Hang on, this is important. The Palestinians voted in Hamas. Hamas is --

HANNITY: They elected a group that says obliterate Israel. They fire 3,500 rockets. The Israelis want to live in peace. So Palestinians work in Israel. Palestinians vote, Arabs vote in Israel.

WEST: The thing is when you at 46 years of vicious occupation --

HANNITY: It's not occupation.

HANNITY: King David was there, Solomon built his temple there.

WEST: Let's look at this land possessions, the history says that Jews jumped out of the burning buildings of Europe in a Jew hating Europe led by a gangster named Hitler, right? They landed on the backs of some Arabs in 1940s.

HANNITY: That was the U.N. partition plan in '47. They declared their independence in '48. What about King David and Solomon and the temple that was built on that very land? That was their land.

WEST: Thousands of years, there's so much transformation, people don't have control of people of land for 2,000 years. But you deny an occupation is at work?

HANNITY: I absolutely deny it.

WEST: Oh, no, we have deep disagreements.

HANNITY: Let's see if we can find some agreement.

WEST: I come from people who have been terrorized and traumatized in the United States, American terrorism. Michael Brown and his precious mother led --

HANNITY: A kid was killed. Do you know what happened?

HANNITY: Where did you rush to judgment? Because the police say he was reach -- I wasn't there, and you weren't there. You can't call it terrorism if you're not there.

WEST: Because when you kill an unarmed, innocent brother, how in fact could it be anything else?

WEST: What could he have done to warrant being shot like that?

HANNITY: If you're reaching for the gun of the police officer, you're no longer unarmed.

HANNITY: Is that anyway to react?

WEST: It's a raid. You want to have some kind of moral venue. We want the love supreme of John Coltrane and Jesus to operate. But you understand that outrage.

HANNITY: Do you understand what that screen says. The only good cop is a dead cop.

HANNITY: Do you believe Americans --

HANNITY: Let me ask you something, do you believe people are innocent in America until proven guilty?

WEST: They should be.

WEST: He should have a fair trial.

HANNITY: And you just called him a terrorist and convicted him without the benefit of a trial.

WEST: Because the bullet came from someone, and it --

HANNITY: You don't know the circumstances. Do you? You weren't there.

WEST: You got a good point. It's hard for me to conceive --

WEST: He's assumed innocent. But a precious child has been killed.

HANNITY: I don't want any kids dead. You want to know the first thing we can do to save kids from being killed? We can throw them in schools that are not the dumbed down, stupid schools we send them to.

WEST: Give them a job with a living wage. We can give them a sense of self-respect. Let me ask you this -- do you agree that there's such a thing of American terrorism and Israeli terrorism? Is there such a thing for you?

HANNITY: I don't think, is my answer -- there's never been -- the United States has not been perfect --

WEST: America has a history of terrorizing indigenous people.

HANNITY: I believe America, the greatness of America, and the greatest sin was slavery --

HANNITY: Slavery is "evil," that's the word I would use.

HANNITY: Our founders and our framers in their wisdom created a system where we right wrongs and create injustices. And they have been proven correct with the 64 Civil Rights Act, the 65 Voting Right Act.

WEST: Is there such a thing as Israel terrorism?

HANNITY: No, I don't think so. I believe Israel is the victim.

WEST: You don't think Israel has committed a war crime when it kills --

HANNITY: Israel is protecting its city from constant attacks. The 48, 67, 73, 3,500 rockets fired into its city, they have a right to defend itself. If I fire a rocket at your house, what do you do?

WEST: You don't have a right to commit a war crime.

HANNITY: If I attack your house, what are going to you do? If I break into your house what are you going to do?

WEST: I'm going to defend myself.

WEST: But I'm not going to kill your momma. I'm going to focus on you. Collective punishment is a war crime, my brother. I don't have a right to kill your child if you come into my house.

WEST: If you deny such a thing as Israeli terrorism -- every nation - -

HANNITY: Israel is surrounded by terrorists, my friend.

WEST: I agree with that too. We've got to condemn terrorism in all its forms.

HANNITY: I need you for a full hour.

WEST: I'll be back, though.

HANNITY: Israel is a victim of radical Islamic terrorism, is the world's modern Nazism.

WEST: There is a different form of Nazism that certainly was --

HANNITY: Radical Islamism is the world's modern -- they want a modern day holocaust.

WEST: If you have militarism and fascism together you get fascist consequences.

HANNITY: I don't know why I like you, but I do. I like you. I can't help it. I want to teach your class.