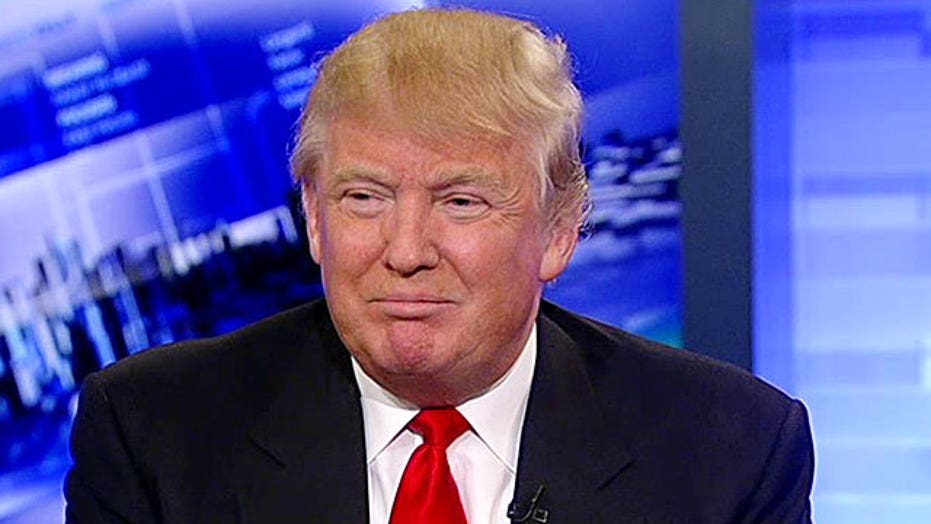 Donald Trump: 'I want to make the country great again'

This is a rush transcript from "The Kelly File," May 20, 2015. This copy may not be in its final form and may be updated.

MEGYN KELLY, HOST: Donald Trump is a question mark in the 2016 race. I spoke with him earlier about his plans. Free speech, Jeb Bush, and whether you have to be [whistle] -- to run for president. Great to see you, Mr. Trump thanks for being here. There's a Bloomberg poll saying six percent of Republicans would never consider now you for the GOP nomination.

DONALD TRUMP, REAL ESTATE DEVELOPER: And I think that's because nobody thinks I'm running. They don't think I'm running. It's really a funny thing. As you know, I came in, like, beat almost everybody in the New Hampshire Bloomberg poll, the same thing. Yet they don't think I'm running. So we'll see what happens. I mean, in June, I will announce one way or the other, and I think you may be surprised. Even you may be surprised. I'll be announcing sometime in June.

KELLY: I'll only be surprised if you say you are running.

TRUMP: Really, OK. That's good. I hope you're going to be there.

KELLY: Let's talk about Iraq. This has become a question. First of all, did you see Jeb interview that we had? What did you think of how he handled the Iraq question?

KELLY: Let me put it to you. Knowing what we know now, would you have authorized the invasion into Iraq?

TRUMP: As you know, you don't have to put it to me because you have the article that said in 2004, I was strongly against ever going in.

TRUMP: Because I knew Iraq and Iran as being the same in terms of power. And they'd push one way, they'd push another way. Have their five- year war, then they'd stop, take a breather then they'd have their five years where nothing ever happened. We decapitated Iraq. Now Iran is taking over the entire Middle East.

KELLY: Some of the Republicans say that is the fault of President Obama for pulling out the troops when we had victory, that they snatched defeat from the jaws of victory.

KELLY: Let's talk about Amtrak. After the Philadelphia train crash, you started tweeting out about infrastructure saying the only one to fix the infrastructure of our country is me. Talking about how you know how to build things which is obviously true.

TRUMP: It is true.

KELLY: But we were talking on this show about, you know, those who are blaming infrastructure as -- what are you talking about? The guy was going twice the speed limit. How do you make this an infrastructure problem?

TRUMP: That's infrastructure. If they had the right things on the rails, it couldn't have gone more than 50 miles per hour.

KELLY: You can't blame the crash on infrastructure. The crash appears to be the fault of the driver. Infrastructure may have been able to overcome that. It wasn't the cause.

TRUMP: Regardless of the train. Ok, the train. The bridges are falling apart. The roads are falling apart. The medians are -- the airports look like hell. The airports, I come back from places like Qatar, we're doing a tremendous job in Dubai, two actually very big jobs in Dubai.  The airports are unbelievable. Then we land at LaGuardia, its third-world country. We land at Kennedy, potholes in the runway. We land at LAX, in Los Angeles, Newark Airport.

TRUMP: We have to have the money.

KELLY: Obama has been pushing for more money for infrastructure. The Republicans say we don't have it.

TRUMP: He hasn't pushed the right way. Take the money back, take the jobs back from China, from Mexico, from all these other countries that are absolutely eating our lunch and nobody can do that like I can do it.

KELLY: Let's talk about free speech because after that Pam Geller event down in Garland, Texas, where they were attacked and the two would-be Jihadi's were shot dead by the police force, you also sent out some tweets saying why taunt in order to provoke possible death? Dumb in that moment.

TRUMP: I think Pam Geller is a terrible messenger. I think she's terrible. We have enough problems without taunting and driving everybody crazy.

KELLY: But my question to you is, because this turned into a bigger thing, like what do we stand for as Americans if not for freedom of speech, ability to express yourself, this speech in particular which was in defiance, it's like the cartoon that won the contest it had Muhammad standing there saying you can't draw me and the person looking up to him saying, that's why I draw you. It was about people trying to shut down an American ideal and this group, however unsympathetic they may have been, saying, we reject that attempt.

KELLY: What do you make of what we see now? The White House is saying, the administration is saying we're taking care of Isis, this is a setback in Ramadi and the overall strategy is a success.

TRUMP: It's a total disaster. We're losing it so badly. They're cutting off the heads of every Christian that they can find and other people.

KELLY: What would you do differently?

TRUMP: You're going to have to be stronger. You're going to have to go in there much stronger. I'll tell you one thing I'd do different, so they caught the accountant, they call him, a few days ago. Instead of talking about it, they should be silent. They're bragging, oh, we got him.  First, he was a mid-level person. And it was such publicity, we got him, we got him, one person. They should have been quiet and gone after others that weren't suspected. You know, it's very interesting I'm a big fan of General Douglas Macarthur, I'm a big fan of General George Patton. They don't talk. They do.

KELLY: You haven't been a military leader and you haven't actually governed a state or been a lawmaker.

TRUMP: All over the world, I do business. I make great deals. I've made hundreds of millions of dollars against China. All over the world I make money and I build great things. Talking about building walls, who's going to build a wall like me on the southern border? I built a great company.

KELLY: I know you've hired staffers in Iowa and New Hampshire and South Carolina so it appears you're gearing up.

TRUMP: I'm gearing up. We'll see what happens. You may be very surprised. I hope you'll be there.

KELLY: You have to be a little [whistle] to run, don't you?

TRUMP: I want to make the country great again. This country is a hell-hole. We are going down fast and I'm a conservative but I have a big heart. I will take care of people, but a lot of people want me to run, and we'll see what happens.

KELLY: Great to see you. Thank you for being here.