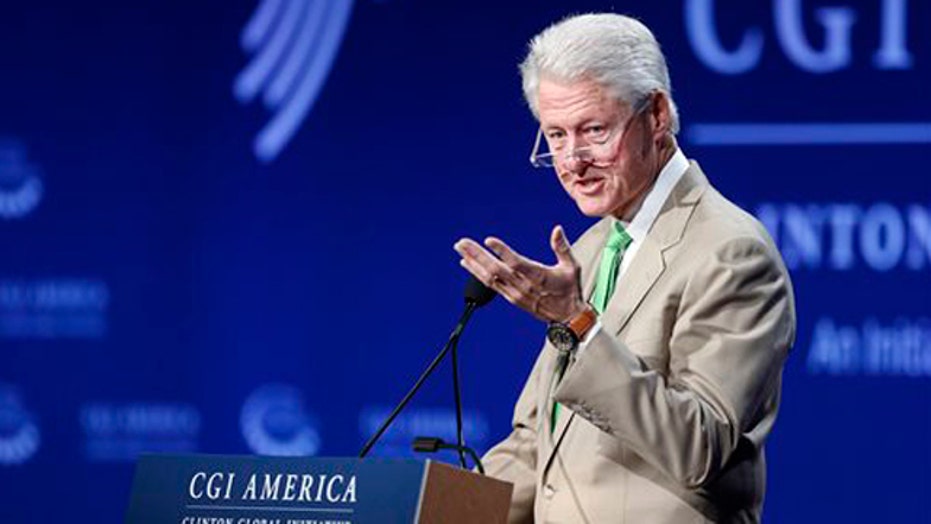 Does America have a lack of understanding of radical Islam?

This is a rush transcript from "Hannity," July 31, 2014. This copy may not be in its final form and may be updated.

SEAN HANNITY, HOST: And welcome to "Hannity." And this is a Fox News Alert. New disturbing audio has surfaced of former president Bill Clinton from September the 10th, 2001, saying that he once had a golden opportunity to kill Usama bin Laden.

Now, here's what he said just hours before the 9/11 terrorist attack that left 3,000 people dead. Listen to this.

BILL CLINTON, FORMER PRESIDENT: (INAUDIBLE) I'm just saying, you know, if I were Usama bin Laden --he's a very smart guy. I spent a lot of time thinking about him.  And I nearly got him once. I nearly got him. And I could have gotten -- I could have killed him, but I would have had to destroy a little town called Kandahar in Afghanistan and kill 300 innocent women and children, and then I would have been no better than him. And so didn't do it.

HANNITY: He didn't do it, and look what happened to this country as a result just one day later! America changed forever on 9/11/2001. And what Bill Clinton didn't seem to understand on September the 10th, 2001 -- he had a chance to prevent that day of infamy from ever happening.

And what's even more frightening is much like Clinton, President Obama to this very day refuses to recognize the real and clear present danger posed by radical Islam.

Now, we did, in fact, reach out to the Clinton Global Initiative, hoping to get a comment from the former president about this newly uncovered audio. We have not heard back.

Joining me now with reaction to this and much more is Fox News strategic analyst Lieutenant Colonel Ralph Peters. Colonel, welcome back to the program. Thank you.

HANNITY: What's your initial reaction to that?

PETERS: Well, not at all surprised, except that he actually said it.  Look, I worked in intelligence in the Pentagon and the Army staff during most the Clinton presidencies. And I will tell you that there could have been multiple opportunities to get bin Laden, not just one or two, but there was no interest from the White House, no serious interest. They just wanted the problem to go away, the way Obama wants the Islamic state caliphate to kind of just disappear.

And so the frustrating thing to many of us, those of us who had been out in the world in Pakistan or central Asia or Turkey, saw these threats coming. And the bad guys weren't trying to hide it. In Clinton's Washington, there was no interest -- I mean, Clinton was like Obama in the sense that he cared far more for his personal popularity with his base than about America's security. So Bubba was Obama before Obama.

HANNITY: All right, what -- it's relevant to today in a lot of different ways. We see the secretary of state, we see the president pressuring Israel to have a cease-fire, which, by the way, has just happened for at least 72 hours. They're pressuring them to have a cease-fire, but yet if I had 3,000 rockets fired into America, I would want to defeat and break up the infrastructure and the tunnels and find the rockets that people were using to hurt American towns and cities and our states and our people.

Why would we do that? What is -- there seems to be a missing chip here, a lack of understanding of radical Islam even to this day.

PETERS: Well, there certainly is. It's just disgraceful that, as one of your -- you know, as many have observed, many who are not part of this administration, that, in fact, when you pander, as this administration does, to radical Islam, the people like the Qataris, you're undercutting the chances of moderates in the Islamic world, those who don't want Islam to be constant jihad.

But there's this mythology, clearly, in the Obama administration that somehow, people like Hamas are freedom fighters. I mean, the disdain for Israel among the Obama-crats is just visceral!

And you know, thank you, Mr. President, you appear to have saved Hamas for at least the next 72 hours. How this administration can draw any moral equivalence between Israel, which wants to live in peace, and murderous Islamist thugs who use their own people as human shields -- it's just stunning to me, Sean. But again...

PETERS: Yes. Let me just point out if I may, you know, the parallels go way back to, on a smaller level, of course, after a hard gun battle in Mogadishu, we'd won, Aidid was done, and President Clinton panicked and ran away. Just as we'd won a big war in Iraq, after a lot of trial and error, we'd won, and Obama ran away. I mean, Clinton runs away from Mogadishu.  Obama runs away from Iraq. And the consequences are continuing conflict.

At some point, you've got to recognize that contrary to the left's (INAUDIBLE) Oh, there's never a military solution, war doesn't change anything -- throughout history, war changed more things than any other factor in human affairs. And there are some times when you've just got to kill bad guys and not stop killing them until there are no bad guys left.  Sorry, peaceniks!

HANNITY: I am having a hard time wrapping my arms around a mindset that doesn't see who the good guys are here and who the terrorists are here. For example, let's start -- we'll go immediately to Hamas's own charter. This to me pretty much tells everything. "Israel will exist and will continue to exist until Islam will obliterate it, just as it obliterated others before it."

Now, that's from their charter, and here is a former speaker of the House, Nancy Pelosi, saying, oh, the Qataris told me they're a humanitarian group. Listen to what she says. Meanwhile, the Qataris, by the way...

HANNITY: ... are providing the funding so they can buy the rockets.

PETERS: They're number one.

HANNITY: Listen -- listen to this.

REP. NANCY PELOSI, D-CALIF., MINORITY LEADER: We have to support Iron Dome to protect the Israelis from the missiles. We have to support the Palestinians in what they need. And we have to confer with the Qataris, who have told me over and over again that Hamas is a humanitarian organization. Maybe they could use their influence to...

CANDY CROWLEY, CNN ANCHOR: The U.S. thinks they're a terrorist organization, though, correct? Do you?

HANNITY: How could a former speaker of the House -- our own government recognizes Hamas as a terrorist organization. How did she not read their own charter? How does she not know the Qataris are the ones providing the money to buy the rockets that kill the Israelis? Does she not know these basic facts?

PETERS: No, she doesn't know the basic facts. She's dumb as a rock and makes no effort to educate herself. And you know, I'll tell Speaker -- former Speaker Pelosi that, good -- good Lord, I mean...

HANNITY: I think dumb as a rock is about right.

PETERS: And the Nazis were wonderful humanitarians. They ran great youth camps for blond-haired children. I mean, come on! At some point, you've got to recognize evil when evil is right in your face!

PETERS: And evil -- Hamas is evil. The Qataris are evil!

But again, Sean, there's this notion among Washington elites -- and by the way, check out the Washington think tanks funded by the Qataris. There's this notion that if we just -- if we just make friends and chummy up and do the bidding of these Islamist states -- and Qatar is about the worst right now -- that somehow, everything will magically work out. They are exploiting us, and we're too stupid to see it!

HANNITY: Listen to Hillary Clinton. By all accounts, she wants to be the next president of the United States. And she makes a comment that is equally breath-taking when she sort of rationalizes a way why Hamas is using the Palestinians as human shields as they fire their rockets from schools and hospitals and heavily populated areas. Listen to this.

HILLARY CLINTON, FORMER SECRETARY OF STATE: The problem is, and this is something -- I'm not a military planner -- but Hamas puts its missiles, its rockets in civilian areas. Part of it is that Gaza's pretty small and it's very densely populated. They put their command and control of Hamas military leaders in those civilian areas...

HANNITY: How about it's an evil strategy that they want to use human beings in their -- in the advancement of their radical Islamic caliphate?  Wouldn't that be a more accurate description?

PETERS: Well, it certainly would, Sean. But what's stunning to me is this woman was secretary of state! She should have these issues down! And she doesn't. And again, Hamas -- I mean, Gaza is not tiny. It's not huge, but it's over four times the size of Manhattan. And there are plenty of spots in Gaza from which Hamas can fight and launch rockets and shoot mortars without setting up their weapons of war right inside playgrounds or right next to schools and hospitals. It's all part of Hamas's strategy.

And I have to say that I don't expect better from Nancy Pelosi. I mean, my God, Lord help us. She's an example of how mediocre our political system has become. But frankly, from Mrs. Clinton, I did expect -- not honorable behavior, but a glimmer of intelligence. I mean, she's not totally stupid, but she obviously hasn't done her homework on this. And when she was secretary of state, she obviously wasn't reading the briefing books.

HANNITY: Colonel, thank you. Appreciate it.