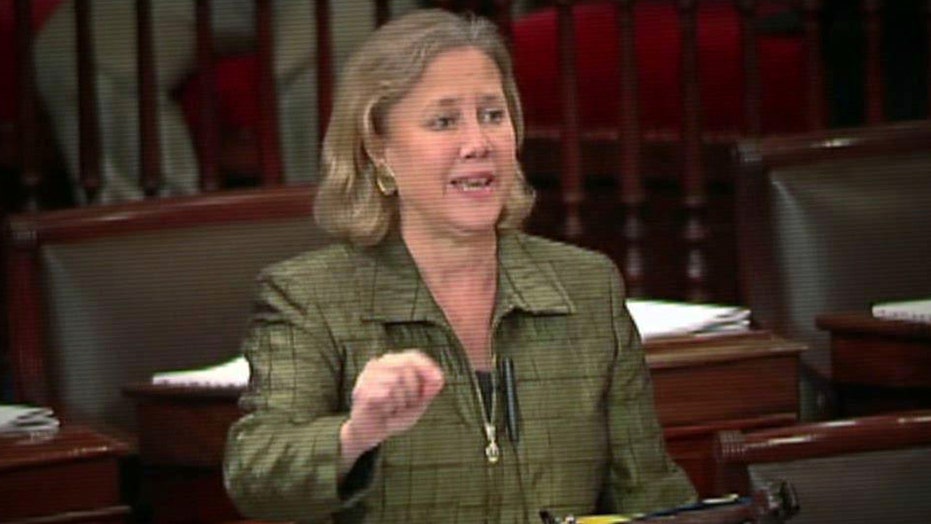 Does the government have a spending problem?

DO WE HAVE A SPENDING PROBLEM?

WAYNE ROGERS: Well, Eric, I think it's worse than that, because you said millions and billions. We're in the trillions. We're spending-the budget is in excess of $3 trillion. A third of that is being borrowed. In other words, we're spending way out of control, totally out of control. Here's a bar chart, for example. I don't know if you can see this right here. The dark part here is the part that we are borrowing each year. That's almost a third of the amount of money that we're spending. It is it outrageous, and they can cut it in every place and they don't do it.

JOE SESTAK: Well, let me come back to you with two other examples: take the labor department. You would think that that is the one department that is supposed to be responsible for training our adults. Actually, our federal government spent last year about $18 billion under nine agencies and actually 47 different programs. The GIO actually said these were duplicative and they were serving the same community with the same types of programs. But let me also take the defense department. You know in the defense department, as you probably well know, we had, and you were just talking about some programs that were probably a few million dollars-but the defense department had cost overruns of $350 billion in 2008 programs. I know when I was in charge of, as a navy admiral-- costing out a aircraft for $11 billion-- the confidence we had in the defense department that was the right price, was 33 percent. But my point is, we sold it to Congress, and therefore we have cost overruns.

TRACY BYRNES: Well I've been up nights worrying how the Jordanians use their hookahs, so I'm glad we're at least doing that study. Here's the thing, Eric, the thing that bothers me the most is the denial part of it. "We don't have a spending problem. All is well!" We need like a version of Alcoholics Anonymous for these people. Admit the problem before we can fix it. Half of them don't believe we have a problem, and that is why they keep spending.

MONICA CROWLEY: As if we're pulling it out of thin air. Government has never been able to control itself, because there is no profit motive with the government and no incentive for efficiency. Let's put it this way: since the end of World War II, presidents and congresses of both parties have spent about-- federal spending has been between like 18 and 21 percent of GDP. Over the last four years, under President Obama, Harry Reid, and Nancy Pelosi, that has exploded. President Obama has ratcheted up that baseline to 25 percent of GDP. That is discretionary spending, and it's entitlement spending, to the point where we have such unprecedented spending we have record-breaking deficits and debt.

JONATHAN HOENIG: This would never happen in the private sector, Eric. It happens in the public-sector dominated industries-like education, where incompetence is rewarded. It's shameful that this gentleman would even have a job after these types of allegations, let alone essentially do nothing, sit around making a million bucks a year. I think that's why we see, once again, there needs to be a move to institute some semblance of a market-based process in education. And if schools are under-performing, if teachers are under-performing, hit the bricks. A free market in education would do that.

MONICA CROWLEY: These rubber rooms are sort of the adult version of "time out" for kids, right? Go sit in the corner. Jonathan is right-- this would never happen in the private sector, especially for committing a crime- you are fired. The cost to taxpayers is so outrageous, you guys. New York City alone, New York City school district 2012 last year, cost taxpayers $22 million to keep these rubber rooms going. Los Angeles school district: $1.4 million a month, plus almost another million for substitute teachers. That doesn't even include the cost to taxpayers to run these law enforcement investigations.

TRACY BYRNES: How about the cost to our kids? The whole system is laughable. There are some amazing teachers out there, and unfortunately that's not what we talk about. We talk about the cracks that are in rubber rooms, and getting paid and taking all our money. Our kids are the ones suffering here. Let's do something about this. Stop paying these people. Who cares about loopholes?

JOE SESTAK: Tracy is spot-on. This is outrageous. You know, U.S. Navy, we would've cashiered this individual. What we have to do is really step back and look at it. We've got, of all teachers, about 5 percent many say are incompetent. And Tracey is spot-on. Like in Pittsburg, they re-did their union bargaining rules where they better addressed this. Think about this: the best nations in the world, that have the highest in education, have one-third of all their teachers come from- excuse me, 100 percent of all their teachers come from the top one-third of college graduates. Finland, who's number one, has 100 percent of all its teachers come from the top 10 percent. We only get one-fourth of our teachers from the top one-third of college graduates.

WAYNE ROGERS: That's true, Eric, and I'm not so sure that this is always the union's fault. These things are decided by a so-called independent person who does an investigation. Some of these things may be absolutely accreted. The teacher's actually done something wrong and they have to find out what it is. Now, in the private sector you would have a lawsuit; maybe that's the answer. Maybe instead of putting some guy in a rubber room and paying him eight "chillon" dollars for that, you have the lawsuit. If the teacher files and says "I was unjustly fired, he brings a lawsuit. By the same token, if the district says "you've got to do this," we'll defend this. You've got to have a better method of dealing with this, because everybody isn't always right.

CHINA USING TAXPAYER MONEY TO "CASH IN" ON AMERICAN TECHNOLOGY?

WAYNE ROGERS: I can't help but laugh I can't help but laugh. This guy says he's not going to do this-meanwhile, Fisker, who's gotten all of these things, making automobiles overseas. Solyndra, spending all of that money, down the drain. A123 Systems being sold to China. He's just doing the opposite of what he said. This is outrageous and this is, and this is where we should be cutting.

MONICA CROWLEY: Never in the history of the world has a great power financed, and supported, and advanced its successor. The United States is doing that now with China, not just with our debt-- by selling companies like this that the American taxpayer has invested in.

JOE SESTAK: Not in this particular case, because already the largest lithium owned company, which is in France, we buy all our lithium batteries from them to put in our most advanced aircraft, the F35. We actually use foreign lithium owned batteries to put into our communications satellites. Bowing uses them to go up. The issue here is the President's right. We need to make sure that we can become number one and resell to other countries.

TRACY BYRNES: That could very well be true, but we should be leaving this to the private sector. The government is not a hedge fund; it shouldn't be making business decisions with our taxpayer dollars.

JONATHAN HOENIG: President Obama gave $1.2 billion to all these battery makers. It's been a complete loss to taxpayers. This isn't a security question, Eric. I mean we give F16s for free to the Muslim brotherhood in Egypt. The problem here is not selling it to China, it's the U.S. taxpayer, to Tracey's point, who's had to spend all this money- waste all this money-- on green energy BS.

WAYNE ROGERS: One of the problems is that we were talking about earlier having these commissions and not listening. In the case of Simpson Bowles that happened. This week he laid off his jobs council. They met four times in the last two years. He never listens to them, and he's now dismissed them. Meanwhile, jobs are going south and spending is going up.

TRACY BYRNES: Speaking of spending, there's a new DHS video out there about how to protect yourself from mass shootings. Eric, you've got to watch it! Grab your scissors and hide under your desk. I think you should spend your money on other things.