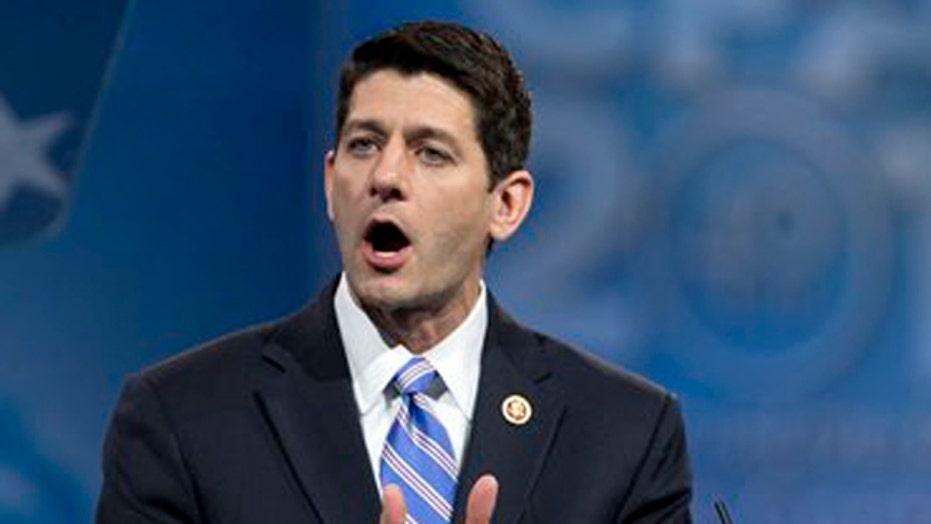 John Tamny: Not at all, a balanced budget is not small government. Under this plan, government spending will increase over the next ten years when we get to a balanced budget in 2023. The budget will be $4.1 trillion. It's 3.4 percent annual increases in spending vs. 5.0 percent under the Democrats plan. Ryan thinks this is small government. I think what he's doing is he's playing bad politics, because his base put him in there to reduce the burden of government...this is going to greatly expand it.

Mark Tatge: It actually cuts too much, David. It cuts $4.7 trillion over ten years. It cuts 4.7 trillion and it cuts in areas we shouldn't be cutting...we should be expanding in areas where scientific, education, areas that are going to create jobs...and Ryan is really he's in fantasy land. Number one this would never get enacted and number two...if it didn't get enacted...it's unrealistic. It's just totally totally out there in Disneyland.

Rich Karlgaard: Yeah, George Orwell is probably spinning in his grave right now with abusive language. I agree with John Tamny and I've just lost a lot of hope in my boy Paul Ryan, you know. He and the Republicans should unite behind a single word...freeze! Just freeze the budget...don't get into debates about minutia, which only rile up people like Mark Tatge. Freeze the darn thing...a real freeze. Let the percent of federal spending go down to 18 percent or 19 percent as a percentage of GDP and we'll boom.

Rick Ungar: Guys, it's not about the how much or how little, it's the what he's doing. I'm gonna read you one sentence that tells you everything you need to know about this budget. One short sentence on page 56 of the Ryan budget that reads: "This budget proposes to reduce the federal auto fleet by 20 percent, excluding the Department of Defense." So, it's ok to cut cars across the whole federal budget, but no. We can't cut 20 percent of the automobiles sitting outside the Pentagon. That is the falsity of this budget. If you want to cut, fine, but don't exclude defense. It's a dishonest budget, it's making pretenses that aren't real. It's nonsense.

Elizabeth MacDonald: Yeah it is a huge increase, in fact, the CBO's already put out the numbers too. It's equal to two-thirds of the world's entire GDP over ten years. That's what we're gonna be adding on, unfortunately into the Ryan budget. I like poor Ryan, I know, I understand what he's trying to do. I'm a fan of his and his attempts to balance the budget, but when you have a budget where Al Gore's lock-box looks better than what you put forth, you gotta say hey, wait a second. We are spending right now a lot of money for the worst economic growth since FDR, when countries like Ireland, Canada, Finland, Sweden have shown time again that the best way to get growth is to cut. To get economic growth back into the economy, you have to remove the government out of the U.S. economy.

Mike Ozanian: No David, John's right. We have to be doing much better. If we want to look at history to times when this country was most prosperous, it's always been when government spending relative to GDP was lower, not larger. The last President to preside over a prolonged period of prosperity was Bill Clinton when he got spending down to 19 percent of GDP. This budget doesn't come close to that.

Morgan Brennan: I'm actually all for this admittedly. I'm not a napper myself, but I think this is great...you don't believe me, take a look at some of the companies that are doing this. Cisco, yes. And they're doing this for a reason...there's a wealth of data that shows that nap time actually increases productivity, workers' positive attitudes towards their jobs, and actually long-term memory growth.

Mike Ozanian: I was always wondering what was wrong with my memory...I don't nap. You know, maybe as Morgan was pointing out, some large companies will do this, but can you imagine going to the local hardware store or dry cleaners and you're in a hurry and you go in and say...you gotta come back later, we're all napping. I don't think this is gonna be a trend.

Rich Karlgaard: I have two words...Winston Churchill, he napped, he saved western civilization from the Nazis." Look, to Elizabeth...would you fire, would you seriously think about firing your top sales person or research scientist if they performed better if they had a half hour nap every day?"

Rick Ungar: Because Winston Churchill also worked in bed, which brings last week's conversation to this week's...last week, we were talking about how Yahoo's making people come back into work and we were all shook up about that. Well what are we bringing them back into work for...so they can go back to sleep? It's a ridiculous thing...come on.

John Tamny: Well, you know, corporations are individuals like anything else. If it serves the shareholders and people are more productive if they're napping on the job, then that's something that individual corporations should do. As always, it should not be a one-size fits all solution. Some companies will do this, some will not, and the market returns in those companies will decide what's policy going forward, I think.

Rich Karlgaard: Well, you know...it's not surprising it's screwed up. The tax code is nine million words long, or about 12 holy bibles. We have to blow it up...the fairest and simplest way is some form of flat tax, somewhere in the neighborhood of 15 percent-20 percent. Exempt the first $30,000 of income so poor people don't get hit. That would be fair, and people could get on with business in their lives.

Rick Ungar: Well yeah. I love the idea about cutting out all the special deals. I mean there's two ways you can look at this. You can have the original progressive system that we created without all the special deals. That was the idea...you don't need to go to a flat tax because I'm not so sure if we do go to the flat-tax that those special deals aren't gonna creep right back in. Where are the assurances on that? And by the way, H&R Block has one thing to do every year...learn the changes to the tax volume...they could've gotten this right.

Elizabeth MacDonald: Yeah, that's what happens when you have government spending, you have a more complex tax code to collect for it. And what I'm worried about is what health reform is also doing to the tax collectors, the IRS. It really is turning the IRS into America's museum of mass confusion as the Heritage Foundation has said. Take a look at what the Treasury Inspector General for tax administration has said about this problem, he's so worried about the IRS being at the breaking point. "It's unprecedented in recent history the amount of responsibility the IRS is now being given in an area, meaning health reform that most people don't think of as an IRS problem." He said, this is gonna lead to problems, that's what he's telling Congress.

Mark Tatge: The IRS is too big, but a flat-tax isn't gonna solve our problems. It's really a reverse Robin Hood approach. And it's gonna increase the income inequality between the middle class and the rich. We're gonna be giving more to the rich and the middle class is gonna be paying a bigger percentage of their income in taxes, so I don't see where that's a solution.

Morgan Brennan: I like the idea of a flat-tax, but I do think the devil is in the details. It depends on the proposal that's put forward. I actually tend to lean towards a flat-tax/fair-tax hybrid, where you see a flat-tax put across the board, and then you have a consumption tax on a federal level instated, or you have payroll taxes, which are still somewhat progressive.

Morgan Brennan: The return on equity has been a little so-so, but yes, I actually really like this pick. Battery snafus aside, they've been taking a lot of orders, they pay a dividend, and they've got strong earnings. They're taking it to the skies.