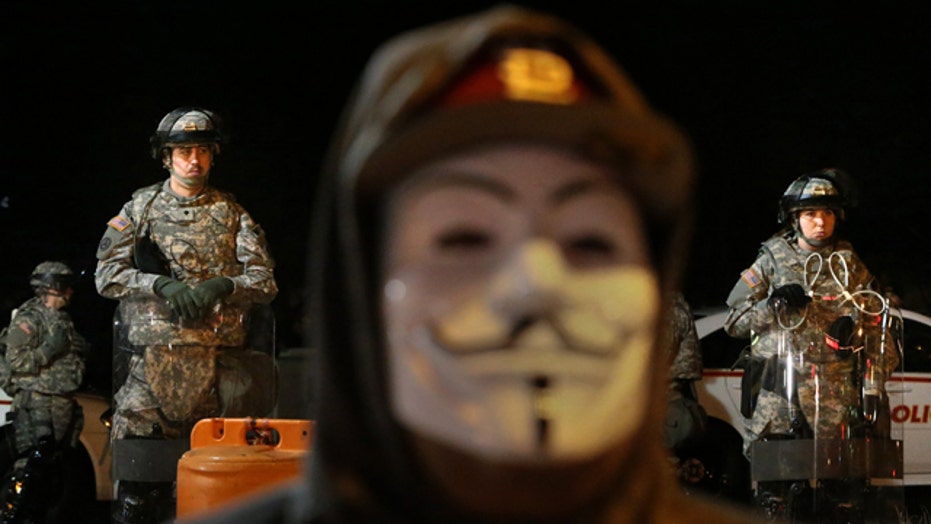 Does Darren Wilson fear for his life?

This is a rush transcript from "Hannity," November 26, 2014. This copy may not be in its final form and may be updated.

SEAN HANNITY, HOST: And this is a "FOX News Alert." There are new concerns tonight over the safety of Ferguson police officer Darren Wilson just days after a grand jury decided not to indict him in the shooting death of Michael Brown. Well, there you have it, the New York Times, the so-called paper of record, inexplicably made the decision to publish the officer's home address in its newspaper.

Meanwhile, there's growing speculation tonight at this hour about what the future holds for Officer Wilson and whether or not he will remain with the Ferguson Police Department. Here with more on that and many other issues are two of Darren Wilson's attorneys. Neil Bruntrager is with us, and Greg Kloeppel is with us. Guys, good to see you. Thank you for being with us.

HANNITY: Why have we not found the person that put the bounty on Officer Wilson's head? Neil, we'll start with you. And number two, what do you make of The New York Times recklessly and irresponsibly putting his home address out there like this?

BRUNTRAGER: All right, and I'm glad you put those two questions together, Sean, because that's what the issue is here. I don't know why anyone would do that. And this is the second time now that it's happened.

Now, here's a man who's a police officer. Here's a man who has done everything he can possibly do to cooperate in this investigation. We finally get a decision. There's a great relief that's lifted from his head, but the risk is still there. Why would you do this on the tail of that? I don't know. I can't answer that for you.

HANNITY: I got to tell you -- I'll take it a step further. If anything, God forbid, happens to Officer Wilson, his family, that community, I blame them directly for what they did, knowing the tense nature of this high-profile case.

Greg, let me -- let me ask you this question. I want to go to the issues and the facts of the case that I was discussing with Daryl Parks.

I've read all of the eyewitness testimony. It is overwhelming -- overwhelmingly in support of Officer Wilson's story. It's incontrovertible, the amount of evidence. They couldn't get probable cause. They never would get reasonable doubt. But yet the attorney general of the United States says that the civil rights case is still open.

What is your reaction to that, considering that you'd have to prove intent to violate the civil rights of Michael Brown in a case like that?

KLOEPPEL: Sean, you hit it right on the head. That's the attorney general's prerogative, to keep the case open. But you are absolutely correct. Intent to violate his civil rights based upon race -- like you said, grand jury proceeding, probable cause. Didn't get it there. Beyond a reasonable doubt, probably wouldn't have got it at trial. And here on the civil rights violation very high standard to prove. I don't think they can get that, as well.

HANNITY: And that bar is so high, I mean, there's never been any instances of racial animus or antipathy. Neil, let me go back to you in this sense. You just heard the comments from Daryl -- I'm sorry, from Michael Brown's mother that he intended that day to go out and kill somebody, without any evidence being offered to corroborate that.

What do we know about Officer Wilson's state of mind that day? I know that he gave an interview with George Stephanopoulos, but that really wasn't addressed. What -- do we know any -- anything about that?

NEIL BRUNTRAGER, DARREN WILSON'S ATTORNEY: We do. We know a lot about it. We know that he started his day early. We know that his now wife is pregnant, was pregnant at the time, and was having trouble with heartburn. They were texting each other back and forth. They were teasing each other back and forth. Every text ended with "honey" or "babe." Everything was a term of endearment, Sean, is the point I'm making.

This was not a guy who was mad. Right before he encounters Michael Brown he's at a call that he volunteered for. He didn't have to go on this call, but there was a call of a two-month-old sick baby who was having trouble breathing. They sent a car over. He knew that the officer whose sector this was in was involved in something else, and he said, no, I'll take the call. Now, is that some indication of a man who's angry?

Now, look, I take her words as the words of a grieving mother, I do.

But again, what we know about him is that this was anyone -- this was someone who was anything but angry. He wasn't that, Sean. He was simply out there working that day. And he's told people this. I mean, this is information that he's provided to the feds. He's provided it to anyone who will listen.

HANNITY: Greg, let me ask you. There have been reports that Officer Wilson may retire, may get off the force. Can you confirm or maybe deny those reports? What are his future plans as it relates to police work?

GREG KLOEPPEL, DARREN WILSON'S ATTORNEY: Well, Sean, I think it's quite obvious for the good of the community, for the good of his men and women in blue, he will never be able to go back to Ferguson. Now, what he will do with his life, that's going to be a lot to decide for him. And he's going through a lot of decision making at this point in time. With regards to any talks of resignation, we are in initial talks, I will tell you that.

HANNITY: Let me ask one question and either one of you can weigh in here. What do you make -- now that we've had an opportunity to see the evidence that the grand jury has seen, I keep using the words, it is so overwhelming and incontrovertible. You would never get a guilty verdict if this were to go to trial. What do you make of those high profile politicians, without mentioning names, and agitators that created in the minds of residents there and around the country the impression this would come out a different way when in fact it was never going to come out that way? Any words for them?

KLOEPPEL: Sean, I will tell you, I was with Officer Wilson approximately one hour following the incident. When I take my statement from my client, I draw a line down the center of my paper. I took his statement. He was subsequently interviewed by St. Louis County detectives. Normally I have to fill in some blanks, add some things. The story was consistent.

The following day we gave the statement to the St. Louis County detectives audiotape statement -- same consistent statement. I believe it was August 11th when I was talking with Darren, and I said, Darren, I'm very confident in our case. I know you did what you were trained to do and pursuant to the law. What scares me are these politicians making these statements.

HANNITY: It was irrelevant.

HANNITY: It was irrelevant for so many people. They never wanted to hear the evidence. There was a rush to judgment.

But I will say this, and gentlemen I'm going to have to let you go. Maybe we'll have you back next week and expand this. But the fact in my mind, it is a tribute to our justice system, a tribute to the grand jury, a tribute to those in the community that felt compelled to tell the truth of what they saw that night. And in my mind that's a system that's working. But thank you both for being with us, appreciate your time.