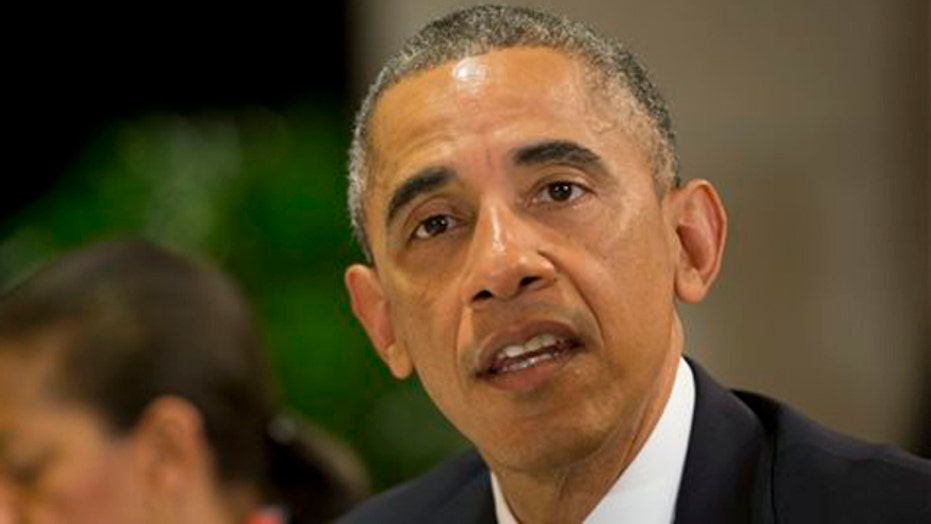 Does Obama really have the authority to bypass Congress?

This is a rush transcript from "Hannity," November 10, 2014. This copy may not be in its final form and may be updated.

SEAN HANNITY, HOST: And yesterday, President Obama doubled down on his intention to use executive action on immigration before the new Congress is sworn in before the end of the year. Take a look.

PRESIDENT BARACK OBAMA: I've got legal authority to make improvements on the system. I'd prefer and still prefer to see it done through Congress, but every day that I wait, we're misallocating resources. We're deporting people that shouldn't be deported. We're not deporting folks that are dangerous and need to be deported. So John, I'm going to give you some time. But if you can't get it done before the end of the year, I'm going to have to take the steps that I can to improve the system.

BOB SCHIEFFER, HOST, ''FACE THE NATION'': So are you saying here today their time has run out?

OBAMA: What I'm saying to them-- actually, their time hasn't run out. I'm going to do what I can do through executive action.

HANNITY: We have a law that exists now.

JOHNSON: A lot of them.

HANNITY: We have a lot of laws. We have laws on immigration.

HANNITY: OK. The president wanted another law, but Congress didn't go along with it.

HANNITY: We have co-equal branches of government, separation of powers.

HANNITY: Does he have the authority he says he has?

HANNITY: So-- all right, I agree with both you and Jonathan Turley.

HANNITY: So the next question is, impeachment. Are Republicans going to take the country down the road of impeachment? I doubt it. So then the president what? He just takes Congress's authority away and--

JOHNSON: Maybe they'll come up with a weak lawsuit in order to stop that type of action. But it sends a signal to young Americans, especially-- we were talking with Katie about that-- that you can get away with basically anything without any cost. And if the Constitution--

HANNITY: Rip it up.

JOHNSON: Means nothing, rip it up!

HANNITY: All right, let's talk about politics, the political side of this.  You're a liberal Democrat. Sorry, you are.

HANNITY: I'm sorry you had a tough night the other night, Pat. Seriously- -

HANNITY: So I believe this election was a repudiation of this president.  So my question to you, politically, that he's going to stick it in the Republicans' face?

CADDELL: No, no. This is what's amazing to me is not only what Peter's saying, which is a disregard for the idea that we should have law, as though we were a banana republic in which I have the-- I can do whatever I want, they can't stop me.

But it is what we don't talk about in the mainstream media. And I watched all the shows yesterday, Sean. No one talked about this, about, Oh, it will upset the Republicans. It's going to be poison. No! This is going to blow up the country.

Three months ago, four months ago, when we had the crisis with the unaccompanied children at the border combined with ISIS and then finally Ebola, American attitudes on immigration have changed dramatically in four months!

CADDELL: This is-- it's going to blow up the country. It's not only going to be a constitutional crisis. What's interesting is there's not been enough polling on this because a lot of the mainstream media doesn't want to touch it. But the numbers exist. Even Democrats are split. And overwhelmingly, the country believes he does not have the authority to do this, nor should he do it!

CADDELL: And this is-- and by the way, they can do some things.

HANNITY: All right, let me--

CADDELL: Come January, they've got the purse strings. They can shove--

HANNITY: What do Republicans do?

PAVLICH: Touch on something that Pat just talked about. I wrote a column last week on election day for The Hill talking about, Will Republicans hold President Obama accountable? Because they haven't been able to so far because they haven't had the Senate. Now that they have the power in the Senate and the House to hold him responsible, they should in some ways.  They have the power to defund some of the programs that he wants to put forward. They have that. They have unions that they can actually work with in border patrol and ICE to kind of hopefully turn President Obama's ideas on this thing.

But the bottom line is the president doesn't care about the Constitution in this aspect. He's flagrantly violating Article 1 of the Constitution when it comes to what he wants to do on illegal immigration. And he's not taking into consideration--

PAVLICH: --what people on the ground wants. He just doesn't really care about--

UNIDENTIFIED MALE: No, he hasn't.

JOHNSON: And when you have a Republican electoral mandate, and the reaction of the president of United States is, I need to go the other way, even though the people have spoken out in a way that repudiates and rebukes this president on every issue, including immigration--

CADDELL: Thank you, sir. I just want to say because this man is a raving narcissist! He has--

CADDELL: No, not you. Obama!

HANNITY: This is your president, Pat! You're saying he's a raging narcissist?

CADDELL: He's a raging narcissist who has no grip on reality! What he's doing-- what he has been doing, which is that, I'm king and I can rule like a king, and the Republicans I have to say before, lay down for him.  McCain, Graham-- they all laid down (INAUDIBLE) when he did the--

CADDELL: Now they've got to stop it because this will destroy any--

CADDELL: They should have used it in the election, and they didn't!

HANNITY: Well, they didn't need to.

HANNITY: They ran against Obama and it worked. You can't really second guess a winning strategy.

HANNITY: He was waiting for the election.

HANNITY: What are we to make of Biden, apparently in this meeting on Friday, says to John Boehner, How long do you need? And Obama, like--

PAVLICH: You know why he did that?

PAVLICH: You know why he cut him off, Obama cut off Joe Biden when he asked the question of how much time do they need? Because President Obama has no interest in working with Congress, despite saying on national television that he does. He wants to go--

PAVLICH: You have to go through Congress!

JOHNSON: --as was done by Ronald Reagan, it needs to pass both houses of Congress, and then be signed by the president.

JOHNSON: The sine qua non-- what must happen first is border security.

PAVLICH: Right, but that's exactly why--

JOHNSON: Then you can have comprehensive immigration reform, whatever form that takes. But first--

PAVLICH: But that is exactly why the president wants to do it with executive action before the new Congress comes in in January because he wants-- he doesn't want to go through Congress!

HANNITY: i got to break.

PAVLICH: He wants to do it that way.

HANNITY: I hate to shut you up because I love you to death. And you just called the president a raging narcissist.

HANNITY: Well, he is.

CADDELL: He has no respect for his office or this Constitution that he has sworn to uphold, and he's shown that time and time again.

HANNITY: I guess you'll be at the White House Christmas party, as usual.

PAVLICH: Once again, I'll be a guest-- I'll be right there at the head of the line.