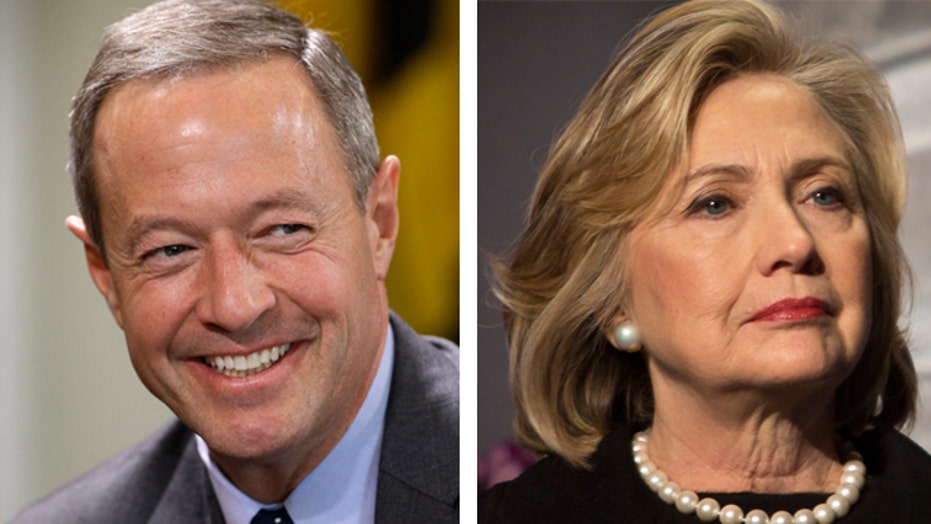 Do Democratic challengers have a chance against Hillary?

This is a rush transcript from "Special Report," June 1, 2015. This copy may not be in its final form and may be updated.

KATIE COURIC, YAHOO! NEWS: Do you think ultimately one of your goals may be to push Hillary Clinton a little more to the left?

SANDERS: No. My goal is to win this election.

COURIC: Would you be interested in being her vice president?

SANDERS: Would she be interested in being my vice president? We'll talk about it. But the point is, the way you win elections, Katie, is by raising issues that the American people think make sense. And I think we are doing that. We will be outspent, but I think we have got a good shot to win this thing.

BRET BAIER, ANCHOR: I don't know what the whispering was about. Eventually Bernie Sanders, Democratic presidential candidate now, independent senator who describes himself as a socialist, getting a lot of crowds on the trail.
We're back with the panel. George, how about the new attention on Bernie Sanders in this race.

And being a socialist, I don't know what he means by that. Once upon a time socialism meant the government ownership of the means of production, distribution, and exchange. Then they watered it down and it meant public ownership of the commanding heights of the economy, heavy industry, and all that.

And now it's European social democracy. And I a few months ago asked him what he meant by socialism, he said social democracy in Europe. So I guess we should think Greece is what he has in mind for the United States.

A social democracy means heavy regulation of commerce. We've got that in this country. It means a social safety net -- 66 percent of our federal budget is entitlement programs. And it means redistribution of wealth.
Our federal government does very little else but redistribute money. I don't know what he's talking about.

BAIER: Juan, he does get big crowds. He is dealing, however, with a controversy in that he -- this essay he wrote in 1972 for an alternative newspaper about passages about a rape fantasy that he has been asked about.
What about Bernie Sanders, the candidate and where he stands?

JUAN WILLIAMS, THE HILL: Well, I think what you are seeing is that the base of the Democratic Party is excited by Bernie Sanders. Why? Because he comes out and he says things, and this is going to upset you, George, but he thinks that we should have 90 percent tax rate in some cases on the very rich in this country. You like that?

WILL: I didn't like it, and neither did Ted Kennedy.

WILLIAMS: OK, but you say you don't know what difference is. Bernie Sanders is a real difference here, 90 percent. That's in the 50s, Eisenhower type thing.

Anyway, the second thing to say is, unlike Martin O'Malley, the former Maryland governor who came out on Saturday night, I thought came out kind of flat, Bernie Sanders goes out there and says directly, break up the banks. Stop this. The rich are getting richer. He speaks with a passion that is not heard right now from the Democratic base.

BAIER: He also has pointed to Hillary Clinton saying "You didn't make a decision on trade, on TPP. I have. I'm against it. So is Elizabeth Warren." How far do candidates go, Charles, against Hillary Clinton is really the question.

BAIER: So why is Hillary Clinton making a jog to the left?

KRAUTHAMMER: That's question -- I mean, it seems to me that it tells you that she is so uncertain about her own position that even with no position she is running left. I think it tells you either that she believes this stuff, which I think is implausible, or that she wants to secure the nomination easily and without any --

WILLIAMS: Very quickly, I think the party wants her to run, I mean, that's what you are seeing.

BAIER: Well, they'll be more to talk about. That's it for this panel.