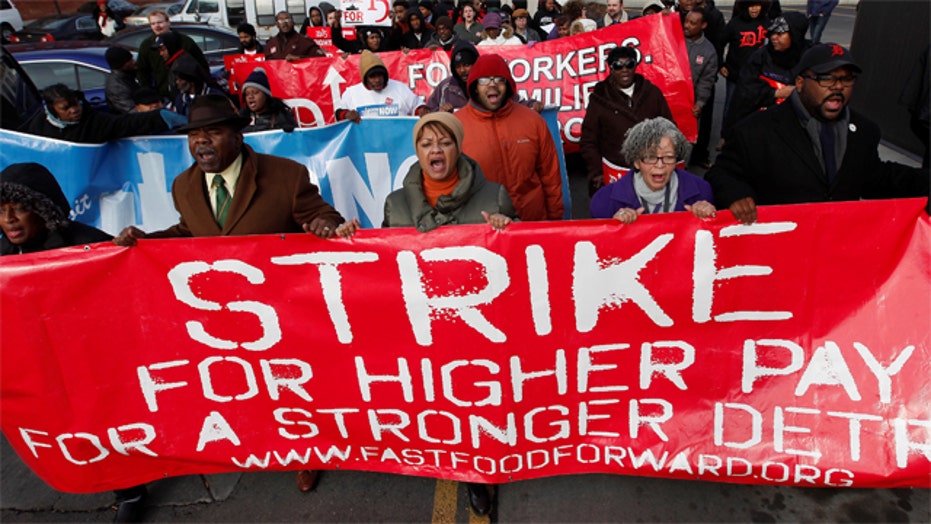 Do Americans want to work less?

MICHELLE FIELDS: Since when is it the government's rule to try to get Americans to work less? The only good thing about this is that finally the Democratic Party is owning up to what they're really about. They're not about getting Americans back to work. They're about getting Americans dependent on the government. The CBO report that just came out shows that raising the minimum wage to $10.10 will reduce 500,000 jobs. The American people didn't elect their representatives to come here and kill their jobs, yet that is what's happening.

JONATHAN HOENIG: America was the country that coined the phrase "to make money". Earning money, productivity is what this country is all about, but here again we see many on the left glorifying dependence and demonizing independence, demonizing productivity, demonizing work. When it comes to the minimum wage, this is econ 101-when you force people to pay higher than market wages the result is less production and less jobs. Specifically, those low-skilled, low-income jobs that give people that ladder to success, that first foot in the door. That's exactly what the left is against. They want to keep people on the government dole, and not independent, autonomous individuals.

BOB BECKEL: I don't know where to start. The first two people here-let's put it this way: neither one of those two, particularly Jonathan, ever had to work over 40 hours a week at his current job. People on minimum wage...

WAYNE ROGERS: The point is not really whether or not this is going to affect the pricing mechanism in the economy so much as it's going to affect people working. The work force itself is going to shrink. People are going to hire less people. Look, if I can get the job done at the same price-I'm looking at margins in my business-if I'm getting this job done with five people who can do this job instead of six people who can do this job, I'm going to lay off that sixth person. That's what's going to happen. So the workforce is going to shrink and ultimately this is going to drive jobs away instead of promoting jobs.

WAYNE ROGERS: (Guest hosting for Carson) was always a great experience. When I was there the head write was a guy named Pat McCormick, who was totally nuts and the more outrageous it was-by the way, politicians were not protected. Nobody protected anybody, I don't think. Johnny shied away from political discussion, but it didn't mean that he didn't make jokes about them, and everybody made jokes about-anything went. Freddie De Cordova, who was the producer at that time, very bright, Harvard Law School graduate-everybody contributed. I could tell you some really funny stories about it. We had a great time.

MICHELLE FIELDS: My father was a huge conservative. My late father wrote for Carson along with Ray Siller, who was the author of the piece that we're talking about. My father was a big conservative and that was never a problem because with Carson it was just whether or not you were funny. That's all he cared about. He would poke fun at both sides. But now it's so much different. Hollywood writers feel as though they need to protect this President, and that they can only take shots at Republicans. I think that's why we saw Leno-Leno had great ratings and yet he was kicked off the air, and I think the reason why was because he was willing to poke fun at this President and make jokes that made the Republicans and middle America laugh.

BOB BECKEL: I don't think Jay Leno lost his job because of his conservative views, but leaving that aside-my guess is that most of these writers there are liberals, and they probably are doing some protection of the President, and that's the way it works. He's in the White House, they're liberals, and they're writers. I mean I would be willing to own up to that. If I were there writing for them I would protect him, too.

JONATHAN HOENIG: I think they're important, although I think they're less relevant and less culturally impactful than before. But I think, to Bob's point, the reason why Jimmy Fallon and John Stewart and a lot of these entertainment-oriented shows protect the President is that they support the President. They support his basic premises: collectivism, self-sacrifice, altruism, and control over people's lives. So that's why all of these blows for the President, whether it's healthcare, green jobs, all of the initiatives and money he's spent they just overlook because they agree with his basic premise: we are our brother's keeper, and that we're here to serve the greater good.

JONATHAN HOENIG: The double standard exists because we don't respect people's minds, we only respect their muscle, their body. So when we see a sports star throw a pitch, or we see LeBron James dunk a basketball, or we see Gisele on the cover of a magazine, we think "well I can see what they're doing, they're doing something. No one can look as pretty as Gisele." But the CEOs-we don't really know what they do. According to Obama, they just sit around cashing checks and playing golf all day long-wait a minute, that's Obama. Anyway, the point is that CEOs earn their money, and not everyone can do it. They earn every penny and they deserve it.

WAYNE ROGERS: I think Jonathan is on to something in the sense that we don't see it. We, the public, do not see what a CEO does. You can't have a photograph of a guy sitting at a desk making decisions, it just doesn't happen that way. So when you see or athletes or you see movie stars, you see scantily clad young ladies, I mean you know that's a visual impact. It's not something that you understand. It's true, they're not creating jobs. That is correct, they are taking jobs. They're not a CEO creating jobs.

MICHELLE FIELDS: I think it has a lot to do with the President is vilifying CEOs all the time, and if you turn on TV, you watch a movie the evil businessman is always trying to take down the little guy. I mean that's how they're portrayed, which is very unfair, because many of the wealthy businessmen, CEOs, in this country are self-made. They didn't inherit this money, they got this money through hard work, skill and sacrifice. Those are things that we should be commending, not looking down upon.

BOB BECKEL: I just learned something, Donald Trump didn't inherit it. Robert Downey Jr.'s movie grossed $1.5 billion and he made $50 million, so I suppose that's a pretty decent path. They go down to Wall Street, these investment bankers-these guys should be in jail because they took this country damn near into a depression, and yet they get $100 billion in bonuses. These guys were never perp walked. They should have been because they drove this economy into the ground.

JONATHAN HOENIG: Energize your portfolio with grains and (JJG)