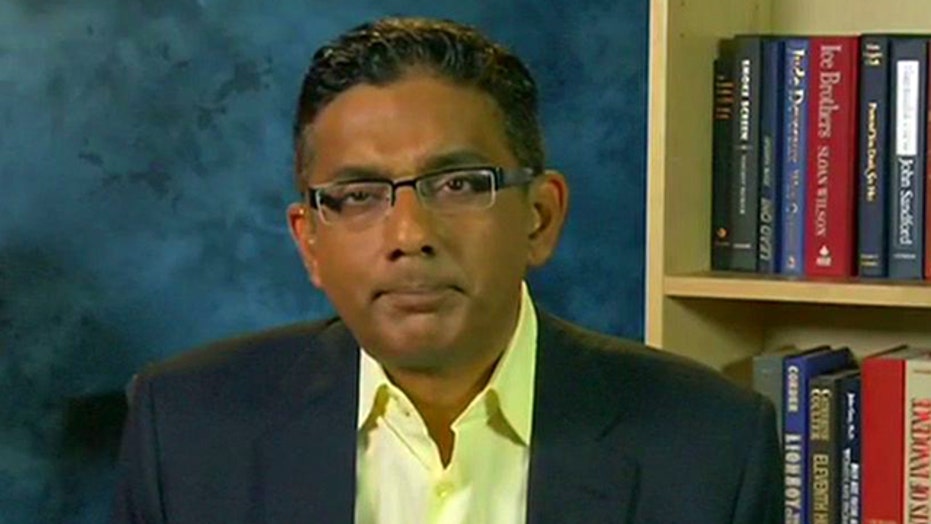 This is a rush transcript from "Hannity," July 8, 2014. This copy may not be in its final form and may be updated.

DINESH D'SOUZA, "AMERICA" AUTHOR: When I came to America, I was stunned by the abundance of ordinary life. The rich guys live well everywhere, but I was struck by how good the ordinary fellow has it in America. And then I was also struck by the goodness and idealism of the American people. Even when they fall short, they always want to do better.

And then I saw this sort of ferocious leftist critique of America.

It's coming from some of our most intelligent people in America on the American campus. And then over the years, I see this critique metastasize out of the campus, into Hollywood, into the media, and then now I think into the corridors of government. So we're seeing -- we call it the shaming of America, an attack on America. It's completely wrong-headed.

SEAN HANNITY, HOST: That was my next guest, author, filmmaker Dinesh D'Souza.  Now, he, of course, the man behind the film "2016: Obama's America," which was a huge hit. And you may remember that soon after the release of that documentary, well, he just so happened to be indicted.

Well, tonight, on the heels of the release of his latest project, there are reports that the retail giant Costco may have decided to pull the best-seller "America" from its bookshelves. Now, our producers reached out to Costco. They gave us a statement.

It reads in part, "Costco is not influenced by political considerations in selecting product for sale in our warehouses or on Costco.com. This includes our selection of books. Our book buyers are solely interested in book sales and do not favor any political persuasion over another. Recently, after deciding to sell the book "America: Imagine the World Without Her," beginning on June 1st, a decision was made to pull the book from sale on July 1st. Now, that decision was based solely on the number of copies sold during that month and had nothing to do with the content of the book. After we made the return, the documentary was released about the book. Since then there's been heightened interest by our membership base and brisk sales at locations still in stock.  Therefore, we have made the decision to reorder the book."

And joining me to talk about what this apparent is happening here -- apparently is happening here, the author of the brand-new movie, "America," in movie theaters all across the country, Dinesh D'Souza. How are you?

HANNITY: I don't often hear of a book being pulled that quick -- you're a well-known best-selling author -- and then being put back on the shelves. What do you make of it?

D'SOUZA: It's very bizarre behavior. The book came out about three weeks ago. About a week ago, it surpassed Hillary's book on Amazon. It's actually currently number one on the Amazon best-seller list. So the sales of the book have been strong. And then, of course, a few days ago, my movie opened in 1,100 theaters around the country.

So obviously, that's -- the book is a companion for the film. And so right on the eve of that, Costco decides, some top executives issue the edict, Pull every book from the Costco shelves.

This is absolutely unprecedented, and the idea that it's based upon low sales is preposterous. Costco features hundreds of books. They even have book signings for people whose books are 10,000, number 85,000 on the Amazon list.

So this is clearly a political decision that they made. I think it's because of their alliance with the Obama administration.

D'SOUZA: And now they're feeling the heat, so they're trying to figure out how to wriggle out of it.

HANNITY: Well, they wiggled out of it. They're putting it back in.  By the way, your first film, "2016: Obama's America," was the second most successful documentary since what, the 1980s? It was hugely successful.

The other thing, Sean, that I think is very exciting for me is that there's a group called Cinema Score (ph), which interviews people coming out of films to see whether they would recommend the film to other people.  We just got an A-plus rating, and there are only a handful of films over 30 years, films like "Forrest Gump" or "Titanic" or "Schindler's List" that have gotten that A-plus rating. So it tells you that people who see the film...

D'SOUZA: ... love it. And this is why the left is so terrified about the book and film.

D'SOUZA: They have the capacity to inspire in people a love for America that the left has been trying to undermine through the curriculum and through its anti-American attacks.

HANNITY: And I do have a cameo in that movie and I'm very proud of my little part that I played. Dinesh, let me put up on the screen the Washington Post. I want to run through the connections between the president and Costco here for a second. And for example, the Washington Post article on Obama and their relationship, "Why Obama Hearts Costco." Then we have an ABC News article on Obama and the Costco relationship titled "Why $20.89 Explains President Obama's Love for Costco." Then we have got President Obama praising Costco and its former CEO. Let's play that for our audience.

PRESIDENT BARACK OBAMA: I'll be asking our businesses to set an example by providing decent wages and salaries to their own employees. And I'm going to highlight the ones that do just that. There are companies like Costco which pays good wages and offers good benefits.

OBAMA: Profitable corporations like Costco see higher wages as a smart way to boost productivity. Costco's founder, Jim Senegal, who's been a great friend of mine and somebody who I greatly admire.

D'SOUZA: Well, here's the remarkable thing. A CEO might like Obama, Obama might like the company might, the top executives may donate to Obama, and still Costco could realize, listen, we're a national chain. We have customers all across the political spectrum. We're not going to let that kind of politics interfere in the way that we organize our business.

I think what's interesting here is that the left in this country has so much intolerance that they're not only trying to go after me through the courts, they also figure out, let's try to ruin this guy's livelihood.  Let's try to make sure that people don't see his film. Let's try to make sure they don't buy his books. And the left is willing to wage that kind of a scorched earth campaign through a company like Costco because Costco decided to order the book. So somebody else came to them and said, what, you have this guy D'Souza's book? Don't you realize that he's an antagonist of Obama? And then the Costco guys went into a huddle and said, OK, let's pull the book.

So clearly this is a consummation of a kind of leftist strategy to go after me for the effrontery to make a second film now that deals with the left and progressivism.

HANNITY: It's back in the stores now. Public pressure. Dinesh, thank you for being with me.