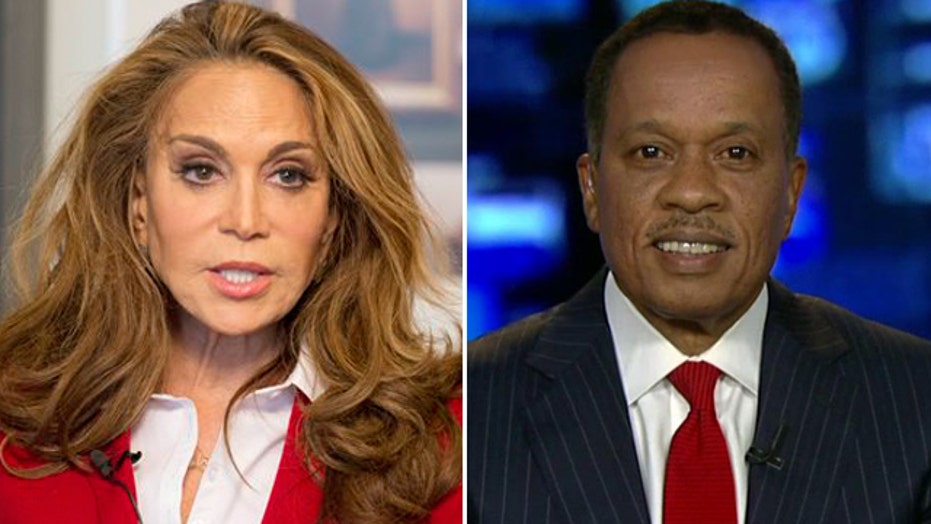 JUAN WILLIAMS: I love free speech, Eric. But what I see is that Pam Geller's behavior is causing people to lose their focus on free speech as an essential right of American life. Instead they're focusing on her antics because she engaged in gratuitous, offensive behavior that led to the deaths of two people, the shooting of a security guard for no reason. This woman was not about, for example, writing a book, she wasn't about "Charlie Hebdo" engaging in satire. She did this as a provocative act.

MICHELLE FIELDS:  The idea that she provoked them and that she's responsible is absurd. That's like saying the woman who walks down the street in a short skirt gets raped-- it's her fault because she simulated and provoked a man and now it's all her fault. That's exactly what you're saying, Juan. You may not agree with a woman wearing a short skirt or agree with the cartoon contest, but this is America. They should not curtail their freedoms because there's some crazy person who wants to kill them.

JESSICA TARLOV: I think there's a space maybe we can all agree-– or maybe we wouldn't agree. I think Pam Geller has said a lot of offensive things that are not constructive, don't move the dialogue forward, but she did have a right to organize a contest, and she’s protected under the first amendment. The question was asked whether Pam Geller or ISIS is a bigger threat. Obviously ISIS is a bigger threat. What they do is illegal. What she did is not illegal. Do I necessarily think it was the greatest idea? No.

WAYNE ROGERS: Well, I think it's a simple one. ISIS is killing people. Pamela Geller's not killing anybody.  Pamela Geller is just voicing her opinion. And in this country we have a constitution that allows us to do that and supports that, and I’m all for that. It was surprising to me to hear O'Reilly say, for example, that free speech is a bogus issue. I don't understand that.  I don't understand where he's coming from. Free speech is not a bogus issue. It is an issue.  But the issue here is ISIS is actually killing people. Pamela Geller's just talking.

JONATHAN HOENIG: The biggest threat to this country isn't ISIS or Pamela Geller, it's the reaction of politicians and many in the media with their shameful reaction, really disgusting dangerous reaction by not standing up and giving a full-throated defense of free speech. Free speech is free thought. Without it there is nothing. It’s like did I offend Muhammad? Oh, I’m so sorry, Muhammad. Come on, this is what America’s about: offending people.

MICHELLE FIELDS: The FBI went after Bob McDonald when there wasn't even a smoking gun, there was just a press story. Here we have a former president, a former secretary of state getting money that may influence foreign policy. We don't know. It should be something that's investigated. We know right now that Hillary Clinton made an agreement with President Obama’s white house saying she wouldn't take foreign donations. She did. In the case of Algeria they got $500,000 and at the time Algeria was lobbying the State Department. Come on.

JONATHAN HOENIG: Yeah, but Eric, if you stuffed a turkey under your jacket and tried to walk out of a grocery store, you would get investigated. You would probably spend some time in jail. But to your point, Hillary can scrub the server, the donation controversy, Benghazi controversy, the Clintons seem to walk on water. What's most amazing is her personal popularity seems to  remain high, as Bill pointed out, probability for getting  nomination, even as trustworthiness continues to go down. If there's any other feasible candidate, Hillary is basically off the drawing board and out of the race.

JUAN WILLIAMS: I'm so surprised at you guys. You guys are supposed to be small government conservatives, and here you want government going after somebody where there's no evidence, no smoking gun, nothing on the table. There's no body, no crime.

WAYNE ROGERS: I don't understand, Juan, I know you're an honorable man, I just don't understand how you could say this about Hillary Clinton. She has a history of lying, of telling falsehoods, of lying about everything she does. I mean, you go all the way back to White Water and Filegate and Benghazi and all of this stuff.

MICHELLE FIELDS: This is the Juan Williams strategy in America. If you have a problem you just throw more money at it. Obviously, it's not working. I really think this is a civil rights issue of our generation-- that people cannot choose the type of school, the type of education they want. That they can only go to the school in their own district. I think we should allow people to have vouchers and have school choice.

WAYNE ROGERS: Well, Eric, as I’ve said before, this is not an educational problem, not a moral issue, not a racial issue. Juan, your son, who talks wonderfully about you, says this is a culture issue. 80 percent of the black people in the United States are born out of wedlock. Over 60 percent of people in Baltimore who are black, and you can't have an inner city conflict like this without having leaders who are responsible people. You can't have Al Sharpton running around saying 'burn, baby burn.' You've got to have Martin Luther Kings, you’ve got to have a Juan Williams.

JUAN WILLIAMS: I happen to agree with you, Wayne, and also, Michelle. I'm a school choice guy. I think it's ridiculous what's going on in those schools. I think they failed those kids.

JONATHAN HOENIG: Eric, to your point, throwing more money at the schools doesn't help them and there's no correlation between spending more per pupil and higher results. Baltimore has gotten millions and millions of dollars recently. The more they've spent, test scores have actually gone down. There are a lot of issues that conflate, and come together for what happened in Baltimore. The one we can control is education, so to Michelle’s point, start with a voucher program and let kids and parents choose the type of education they want, as opposed to Uncle Sam.

JESSICA TARLOV: Obviously, if they're going to be able to use that at religious schools, that brings up other issues constitutionally. But I wanted to add that money goes towards education, but also remedial services like school lunches. A majority of kids in Baltimore actually qualify for that.