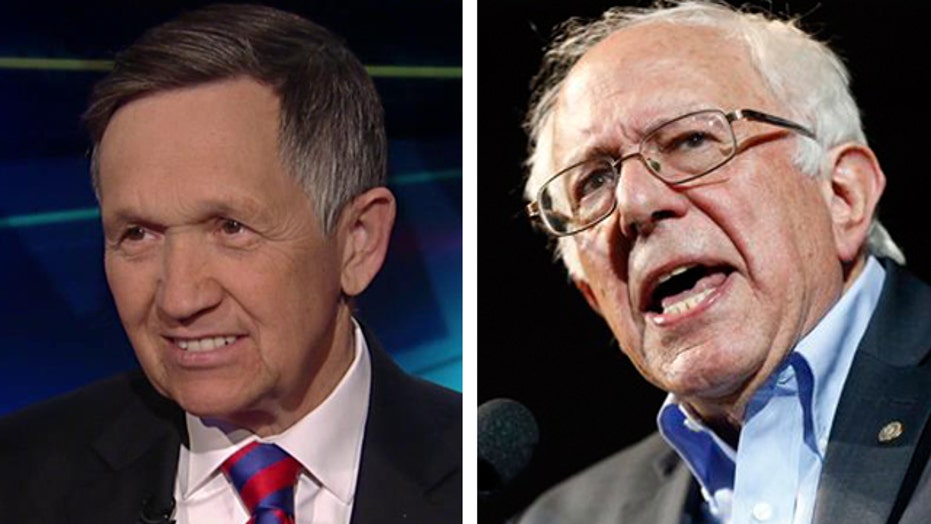 Kucinich: Bernie Sanders is in it to stay

This is a rush transcript from "Your World," July 9, 2015. This copy may not be in its final form and may be updated.

NEIL CAVUTO, HOST: I want to go now to the uproar and the big roaring success of one Bernie Sanders is having, very populist, very passionate.

A fellow who galvanized the same type of crowds, Dennis Kucinich, joining me.

DENNIS KUCINICH, D-FORMER U.S. CONGRESSMAN: Well, I think that you have to look at the crowds he is drawing, the money he is raising, the polls that show him moving up.

CAVUTO: But even The New York Times says he is going nowhere fast. He could really never be the nominee.

KUCINICH: Well, I wouldn't put The New York Times as being the sole arbiter of where...

CAVUTO: I never do, but I found it interesting.

KUCINICH: We agree on something.

KUCINICH: But I do think that Bernie Sanders is going to be heard from throughout this election

CAVUTO: Do you think you were just a little early, Dennis, when you look at the success he's making? Because he is saying what you said.

KUCINICH: Bernie deserves a lot of credit here for stepping up at a moment when people were waiting for someone to resonate with the economic concerns of the American people.

CAVUTO: But I think what The Times and these others are saying, what moderate Democrats, whatever you want to call them, they're saying it's veering the party too far extreme left. Unelectable in a mainstream.

KUCINICH: No, I'm not for government, per se.

CAVUTO: Bernie Sanders is. He wants to bring the top tax rate back to 90 percent. Do you?

KUCINICH: Well, look, what people pay for taxes is something that is always subject to debate.

CAVUTO: But 90 percent is big.

KUCINICH: But Bernie Sanders is not just viable, but he will carry this message deep into the primary season.

Now, having said that, can never underestimate Hillary Clinton. She has tremendous resilience.

CAVUTO: She will not get the nomination.

KUCINICH: I would disagree with you there too. I think that she...

CAVUTO: I don't know who will, but she is not. She is imploding.

KUCINICH: I think that it's going to be a very spirited primary season.  And Bernie is going to be in it to stay.

Well, you were ahead of that curve, young man. Maybe you should have run.

KUCINICH: Then I would miss this opportunity.

CAVUTO: It's always good having you, Dennis Kucinich, a man of his convictions. I'll tell you, that's a rare quality left and right, by the way.