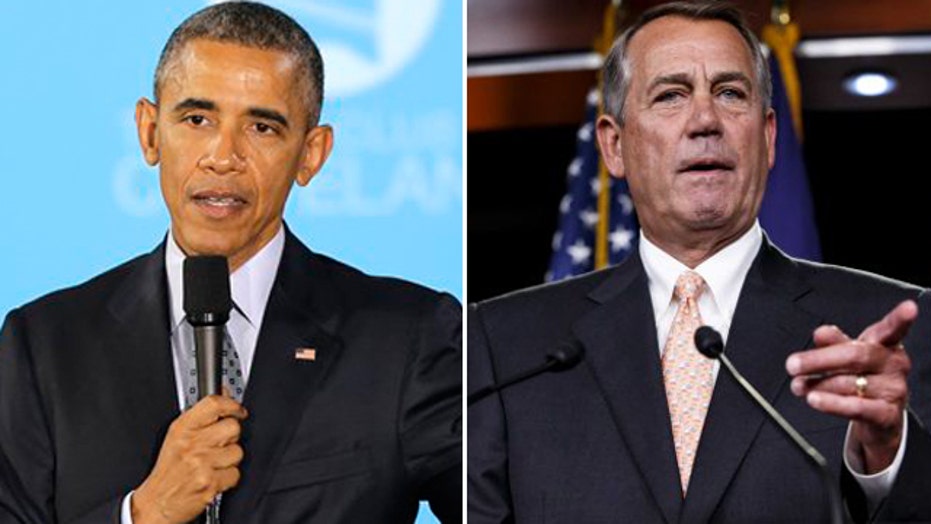 Hissy fit over being fiscally fit?

Charles Payne: Democrats have one game plan. That's buying votes. That's it. Fiscal responsibility. Here's a crazy thing. You think about literature, it's always about being able to go back to the past and see what you've done wrong. The ghost of Christmas past. We've seen this from the Roman Empire to modern day Greeks. It's all about keeping power for the moment no matter what the destruction is going to be in the future. Judge, that's beautiful.

Dagen McDowell: I think these votes fail when it comes to budgets. You have the republicans trying to use the war account to skirt capital military spending. If you want to spend the money, come up with the offset somewhere else.

Charlie Gasparino: Listen, the American people voted for this. I don't think -- interest rates though that does help when you have low interest rates and you can borrow at almost no cost. More to do with the political will of the American people. We put in divided government, we elect people that really don't care about the budget and that like to spend. It permeates the entire Republican Party as democrats. Elect one party, the republicans. You will get more budget cuts. They don't have a perfect answer.

Ben Stein: There are no easy solutions as Mr. Biden would say. We are between a rock and hard place. Number one item essential, defend America. Get rid of the sequester. Stop the gap on defense spending. Two, i hate to say this, but it doesn't really matter what interest rates are. We sell a huge percentage of our debt to the federal reserve. Costs nothing for minting money. We've got to figure out a way to make some rise in income tax for very high income people like Charles Payne and others on this show. We cannot continue to let these people pay very, very low income taxes. The main thing is let's not quibble about tiny amounts here and there. How much do you need to defend America? That's what you've got.

Adam Lashinksy: I agree with Ben in the sense that if you look out over the next 40 to 50 years, we need to prepare ourselves for a confrontation with china. I would say $600 billion is not a meaningless number. The question with is what's the right number. We node to start there. By the way, the conversation we are having is the conversation that congress and the president ought to be having. This is called a conversation. >> They are not having it. They are not having it. This is another one of the things I have on my to-do list. If you are not going to have in Washington, I might as well start the debate on this show.

Charles Payne : Anyone with a 401(k) right now is rejoicing they didn't sell at that particular time. We should be putting a certain fortune of money into the market, into great american companies. Having said that, imagine a government in charge of your retirement? Disability --

Dagen McDowell: The reason i love 401(k) plans, that is your money. That is in an account, it belongs to you. You can use it, you can borrow from it, you can use it to make a first-time home purchase. It's yours. It's not a government promise. They are taking money out of your paycheck for social security and they are promising to give you a benefit down the road. I think money in investment accounts is yours feels a whole heck of a lot better.

Adam Lashinsky: I can envision a scenario where the government set up a retirement program where the rules were very clear where they could help people limit their downsize. We have to be honest about the fact that a lot of people lost a lot of their retirement savings.

Adam Lashinsky: Any investor can put his money in treasury bonds. If you want a good long term return you get an index fund of great U.S. Stocks. I wasn't laughing at you. I was laughing at the funny interchange in all of us. Neil, I don't know why you are not host of a late night talk show like my friend Jimmy Kimmel.

Ben Stein : He's against anything making people show an id so they can get government issued health insurance so that's another problem. I don't think it's a good idea at all. Look, the democrats are such liars saying that's all about big money and they want to squeeze big money out of politics. They're the ones that get most of the big money toe nations it's all just a typical democrat lie.

Dagen McDowell: Voting is speech and if you make it mandatory it is no longer free. That goes against everything we believe in.

Charlie Gasparino: I wonder why he didn't like compare to Nazi Germany or soviet Russia. I think mandatory voting there.

Adam Lashinsky: I didn't hear the president say anything about mandatory voting. I heard him say it would be better if everybody voted. Perhaps we could come up with incentives for people to vote.