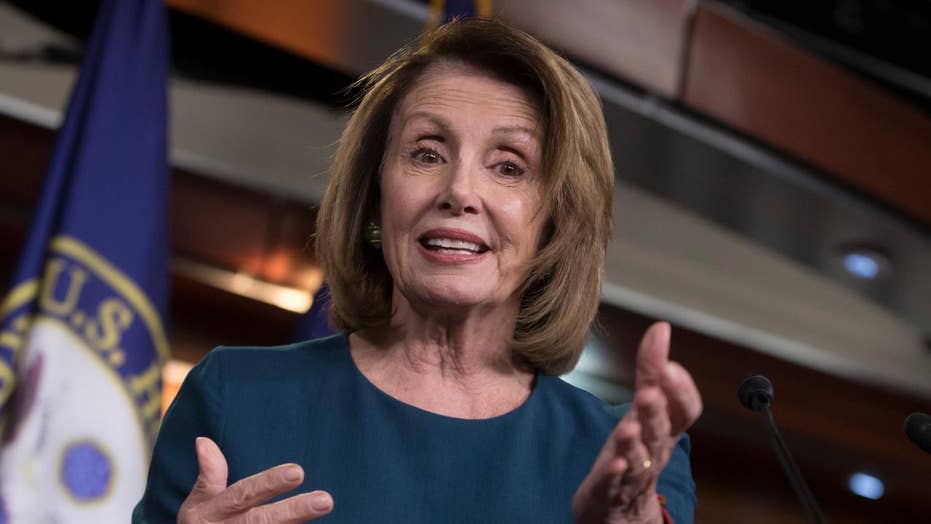 Democrats suddenly concerned with the deficit?

Charles Payne: A little rich, pay as you go, we don't like deficits, we're against the debt—no one takes it seriously. Of course these are the same Democratic Party that talks about spending money like crazy as always an investment. So what about the idea of investing in the American public and American businesses that keep more of their money that they earned by the way and then putting it into the economy. It's so disingenuous on the face of it that it just…you can't take it seriously, you really can't. The idea of regular order, that the Democrats want to play ball—we know that they're not, we know they've been obstructionists so Republicans are going to have to figure out a way to get this through…not fumble like they've done with every effort to repeal ObamaCare.

Amy Holmes: The one thing that Senator Schumer said that I agreed with was doing it by regular order, unlike the way they passed ObamaCare when Democrats were in charge. That would mean that it goes through Committee and then the Committee votes and then you go to the Senate, and the Senate majority leader puts it on the calendar and you have to get 60 votes…but anyway…when looking at the hypocrisy of the Democrats, this issue with taxes and if you cut taxes you're cutting federal revenue, Democrats seem to know that when you tax something you get less of it. When they want to apply "sin taxes" for example—taxes on cigarettes, taxes on soda, taxes on sugar—they know if you raise the price of something you get less of it, so if you raise the price of work you're going to get less of it. If you make something more expensive, you get less of it.

Adam Lashinsky: I'm shocked that we're passing around allegations of hypocrisy in the United States Congress here. I think the really interesting thing is so far the muted voices among Republicans for increasing the deficit. But more seriously, I totally disagree that the Democrats won't play ball. I think they will play ball. The White House is going to have a problem as it has so many times. I think Schumer is a ball player by definition, he'll come and play when the time is right. All I wanted to say is that I predict when this thing runs into its most serious trouble, it will be because of deficit hawks in the Republican Party.

Ben Stein: I don't think it's going to happen. I have the terrible feeling that Mr. Trump is going to get blocked at every turn by the leftists in the Democratic Party and the extreme rightists in the Republican party. And by the way, the data is very, very clear that when you lower taxes you get higher deficits. When Mr. Reagan—a great, great man whose face should be on Mt. Rushmore—when he lowered taxes drastically, there was a big economic push but by the end of his term the total federal deficit almost tripled. Not quite tripled, but it almost tripled. Same with President Bush. It did create a lot of revenues, you're right. But let's remember—he was in office for 8 years. For 7 of those he proposed income tax increases, especially a huge one in 1986. A lot of the loopholes that had benefited people like me were gone.

Charlie Gasparino: Ben is using a little bit of sleight of hand by saying the deficit was three times larger when he left. The deficit as a percentage of the economy was smaller. The economy grew tremendously under Reagan. So you have to look at it—I mean, it's like saying "you've got a $1,000 of debt, I've got $1,000 of debt, but you make $10,000,000 and I make $200." That's the difference here, but you get what I'm saying here. And that's the sleight of hand that Ben is using and a lot of people who attack President Reagan. I will say this though—I agree with Ben on this—this is probably not going to get done. Because Charles Schumer does not play ball. That is the funniest thing I've ever heard, that Charles Schumer is a ball player with any Republicans. By the way, you know what else he is? He's a really good minority leader of the Senate and he keeps regular order within his troops.

Amy Holmes: I think Democrats are trying to poeticize this. They're wedge issues and they touch on race and I think it's a way for Democrats to then use their own dog whistle to accuse President Trump of being racist—that he is not sympathetic to the victims of the hurricane because it's Puerto Rico. I think it's interesting that Democrats keep invoking comparisons to Katrina. Why not comparisons to the BP oil spill when President Obama didn't go down to the Gulf for days and days and days, and was getting a lot of criticism from both sides of the aisle…even the New York Times reported that the Obama administration underestimated continuously the impact of the BP oil spill. That never gets brought up by Democrats.

Ben Stein: I think the point I was applauding when Amy was talking was that this is a dog whistle about racism. Every possible chance the Democrats have, they will try to allege that the Republicans are racist. This isn't a racist issue at all. This is an issue of how do you get aid to an island—you can't just drive a truck there, you can't just drive a car there—how do you get aid to an island that has got very poor infrastructure to start with and now it's even worse. How do you do that? I think of the Democrats had a real plan, if they would stop saying "racism," and say "look, we want you to do X, Y and Z," I think President Trump would listen to it very carefully and faithfully.

Charles Payne: This is one for the history books. There are a lot of lessons being learned. For instance, you can get 10,000 containers of oil, food and other things to the port, but if bridges have collapsed you can't get it to a lot of people. So the response has been strong so far. The messaging hasn't been good initially and I think that's where a lot of people jumped on President Trump. When these things happen, people want to hear a sympathetic tone. Bill Clinton mastered that kind of thing, like "I feel your pain." So there's that element that the Democrats glommed onto, but I think for all of us there's a lesson learned here. This is a unique situation—category 4 storm hits the island and we know next time perhaps we'll deploy the National Guard sooner. The U.S. Army Corps of Engineers said go out there and remake those bridges like they would do in a war-torn country. These are lessons being learned on the job in real time.

Charlie Gasparino: I agree, but who brought up the NFL? It was Donald Trump who created this thing. How about if you're the president…my one point is this, and I agree with everything that is said here…first off, it's very hard to—…I think there's a dog whistle aspect, I think there's an aspect where we're learning from this. The governor from Puerto Rico is not some right-wing Trumpkin, right? I mean, he's presumably a Democrat and so he's not complaining about the response. I think he is a Democrat. But there's one thing that I think presidents do, and you mentioned that Clinton did well, and that's…he taps into the emotion and he sets the agenda. Trump set the agenda last week—it was kneeling in the NFL.

Sessions: Freedom of Thought and Speech at American Universities Are Under Attack

Charlie Gasparino: I don't see why these institutions—which many of them are not even private schools, they're public institutions, public colleges—can allow a sort of Stalinist minority to force the academia to accept only one point of view, I mean, it's ridiculous. And the problem is they waited so long. This sort of PC culture and this sort of Stalinist speech culture is so ingrained in colleges right now, I don't think even a federal government can change it.

Charles Payne: I don't think so. You're right, neither side listens to each other, but on college campuses one side is completely shut out. Allow voice, allow opposition, allow conversation because that's the cradle of it right there.

Amy Holmes: Administrators are not just not taking action, they're actually inciting a lot of the violence. They're inciting the left-wing thugs that are prowling campuses. For example, remember that professor of communications at the University of Missouri where she attacked a student photojournalist and said "I need to get some muscle over here." That was outrageous.

Adam Lashinsky: Of course we shouldn't just allow free speech, we should encourage free speech and that includes the president. He can say he doesn't like what people are saying but he should praise the right to free speech.

Ben Stein: In 1972 I was a teacher at U.C. Santa Cruz. There were 1,500 votes cast on campus in the '72 election. There were two Republicans—me and my girlfriend, that's it. That's how campuses are, especially in California. It's no free speech—Stalinist is the exactly right word. It's a very scary situation and this is how we're bringing up young people, to not tolerate free speech and to disdain free speech…very bad situation.

More for Your Money

Charles Payne: I like SunTrust, I love regional banks, this is my favorite.

Adam Lashinsky: Hey, Charles and I agree. I've got an S&P regional banking ETF. They have very high tax rates which could go down.

Ben Stein: I love the SPDRs as always, I've done really well with them—thank you, God—and I continue to love them.