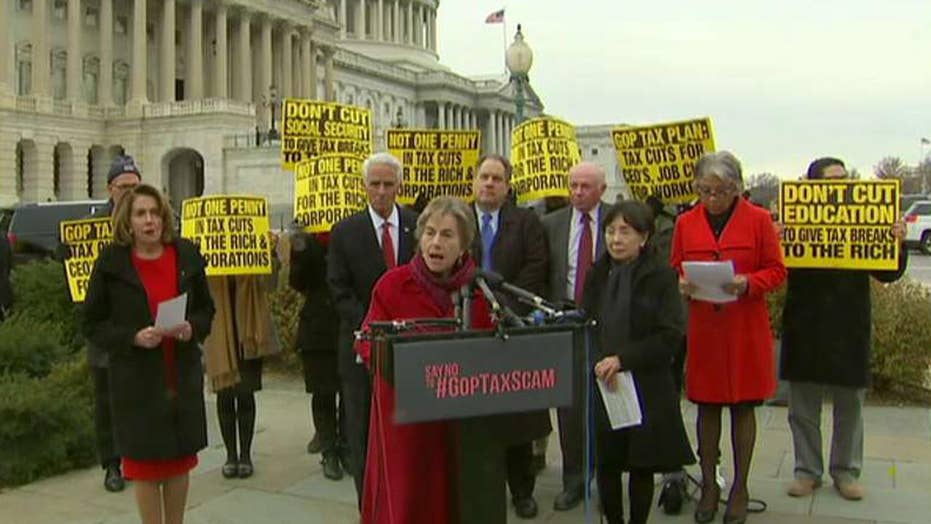 Elizabeth MacDonald: When you look at the analysis and the way it's been done that supports that side of the argument and what they are saying, it doesn't take into account the government benefits that people get. Two-thirds of U.S. households get more of the way of government benefits than they pay into the system in taxes. The tax plan now before Congress doubles the standard deduction it would increase the number of people who don't pay federal taxes at all. And the fact remains the 1 percent pays 40 percent of income tax revenues, the top 20 percent pay 84 percent of total tax revenues. They dirty open secret in DC, those are the brackets that get the tax cuts because those are the brackets that pay the taxes.

Rich Karlgaard: I think it's investor friendly, and that's good because you know a lot of people are invested in the stock market, more than most people realize through their 401ks or their pension funds, so it's positive for all those people. I believe we're going to see wages go up because employment is down and corporations will have more money.

Sabrina Schaeffer: I have heard Republican lawmakers say there are going to be two income families in the middle class that will be squeezed by this bill. Putting that individual aside though, putting the individuals aside because I think there have been sort of differences of opinion and how individuals will fare in this bill, on the corporate side I'm more sort of enthusiastic. I think that Paul Ryan and others finally realize that we're losing businesses overseas because we simply can't compete and I think that will help all workers whether you're lower on the economic totem pole or higher up, ultimately this is going to put upward pressure on wages benefits and jobs.

John Tamny: Well certainly if companies are doing better off they will be more likely to expand and hire. I think the problem with these corporate tax cuts is that they're really not cuts when you look at the big international ones that have a lot of oversea earnings with them they are imposing a new global minimum. What you are going to find unless they fix what is a very bad tax bill is a lot of corporation at least the more valuable ones are going to pay higher rates. It's amazing that republicans given the chance to actually reduce the tax burden actually are going to raise it on the most productive people and those that invest in them. I can't believe this is what they've come up with.

Bruce Japsen: The optics on this that the corporate rate will go from 35 to 20 or 22 whatever the latest figure is, but the middle class is going to get nickels and dimes as a percentage comparison. So we don't know, we've heard Jamie Dimon say this, but I listen to a lot of earnings calls and I haven't heard a single other company say we're going to, as soon as we get this tax cut we're going to raise wages, they're just not saying that. It's to be determined.

Rich Karlgaard: It sounds kind of harsh but the reality is it works the other way, one of the great things that Bill Clinton did in the 90s was to bring about welfare reform, but what makes this time different is a lot of time welfare fraud is being done through disability insurance and in some states like West Virginia, half the unemployed men are on prescription pain pills so we've got to untie that Gordian knot if we're going to have true welfare reform in this country.

Bruce Japsen: Listen, no one wants to be on welfare and I think if people have a job or if they are able to work they will. Well this President when he was running for office said he didn't want to make cuts to Medicaid, Medicare, Social Security programs, and I think he should stand by that. If you want to go after fraud go after fraud, but to actually kick people off who are in need and so forth, I think it's a bad idea.

Sabrina Schaeffer: We've since experimentation in states in the years since then, in Kansas for instance they've done a lot to reform welfare and they've found that people's success economically and socially has increased and I think obviously this is something we want to move towards ultimately we want to help those people who are currently depending on government. That being said I do hope the Republican Party works on its messaging for them, because they simply don't know how to talk about these issues in terms of freedom and human flourishing.

John Tamny: Well I think the message should be if you love poor people, why would you hate them so much as to give them a government program. The reality is the government can give you all sorts of dollars that will enable you not to work but they cannot give you happiness, you are only happy if you are working and that's why it's crucial to get government out of this business, because it enables people to do that which makes them unhappy.

Elizabeth MacDonald: (Welfare) FDR said is a narcotic and it can ruin the spirit of the American soul. And JFK said the best welfare is a job. You look at Bill Clinton, he put work requirements in for welfare Obama did away with them. Welfare roles exploded from 17 million to 46 million today the fraud in that system is equal to a small S&P 500 company.

Bruce Japsen: Well I believe that there should be ways that we could plan better for disasters, but I think in times like this people in California or people that are victims of floods they don't really care about the spending as much they just want it to be resolved.

Rich Karlgaard: Yes it is important and it goes right to the point of being a resilient society which we imagine that we are. And I think that when we overspend we make ourselves less able to bounce back.

Sabrina Schaeffer: It is a little bit more unexpected but I do think that sometimes we talk about the national debt and getting it under control and one of the reasons we argue to do so is because of national security and economic security, sometimes things like this happen and we want to be able to be a nimble society that's able to respond appropriately.

Elizabeth MacDonald: I'm so nervous, I've got family in this area of the country, I'm a nervous wreck about this but you're right David, John McCain pointed this out the U.S. pays 294 billion dollars on federal programs that have expired for things like yoga classes for bureaucrats, I think we can stop that and help people in areas like this.

John Tamny: My concern about this is, this is the reason we have a spending problem. We've nationalized too many disasters, I'm not minimizing it obviously my parents and sister are out there, but once you every other state's problem a national problem, then you have major spending issues.