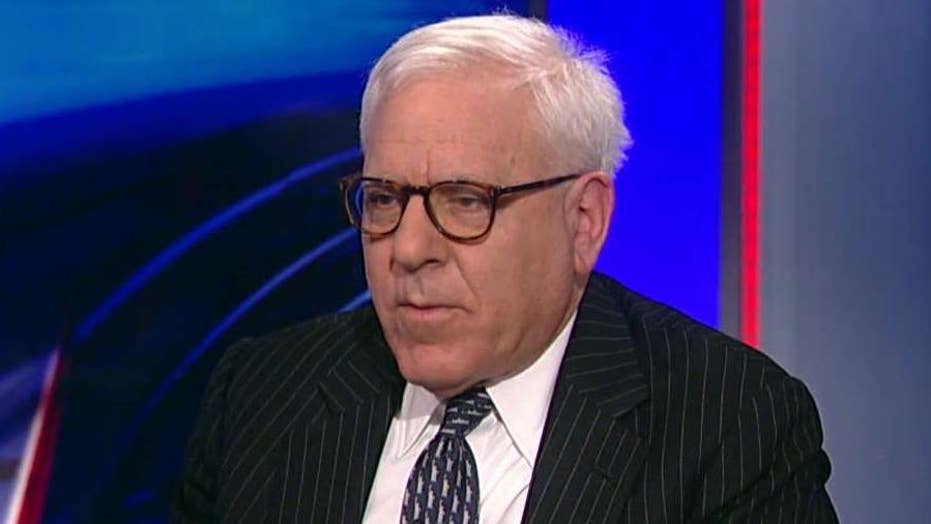 Philanthropist David Rubenstein, co-founder and co-executive chairman of the Carlyle Group and author of the new book 'The American Story: Conversations with Master Historians,' joins Bret Baier on 'Special Report.'

This is a rush transcript from "Special Report with Bret Baier," December 20, 2019. This copy may not be in its final form and may be updated.

John Roberts, Fox News: You've heard the saying, "Past is often prologue." Well, sometimes there is no better place to see what the future holds than by looking back at the past. My colleague Bret Baier recently spoke with author David Rubinstein about reflecting on the past given the issues of 2019.

Bret Baier, anchor: Joining now is co-founder and co-executive chairman of the Carlyle Group, philanthropist, and author of the new book, The American Story: Conversations with Master Historians, David Rubenstein. Thanks for being here.

David Rubenstein, the Carlyle Group: Thank you very much, Bret, for having me.

Bret Baier: I want to start by talking about your Carlyle Group hat, and that is your assessment of where we are as a country as we come to the end of this year with the economy and kind of looking ahead to 2020.

David Rubenstein: The economy is in remarkably good shape. Everybody who wants to find something wrong with the economy because you can't imagine economy can be this good for this long. We are now 11 years into a growth cycle. We've never seen this before. And so, people are saying, "Well, why is something not going wrong?" But nothing that seems to be going wrong. Inflation is low. Unemployment is low. Growth is pretty good at about two percent. There don't seem to be any big problems going on. Now, of course, when problems come along, they usually come along in an unexpected way. So, something unexpected could happen. But if you're looking at what we now know, the economy seems to be pretty good for 2019 and 2020. I don't see any recession imminent in 2020.

David Rubenstein: The uncertainty about trade, I think, has been largely cleared up recently. We have the USMCA that's going to go through, and the China trade agreement is going to go through. It's not everything that everybody wanted, but it's a trade agreement that will be enough to get the markets, I think, reasonably happy. So why is the market doing so well and why is the economy doing so well when you have this political uncertainty in Washington? There's no perfect answer. My answer is these markets basically look for certainty, and they pretty much know what's likely to happen. They don't see an impeachment resulting in a conviction. So, they've already discounted the impeachment, and they'll likelihood of a conviction. They know that President Trump is not going to be convicted; therefore, you're going to see President Trump for the remainder of his term and maybe beyond that.

Bret Baier: When you look at this moment, I mean, obviously, it's historical. And we study history, talk about history, we're kind of living history.

David Rubenstein: Yes. There's only been one of these times before, really, when we had the impeachment of Bill Clinton. Now, Richard Nixon didn't technically get impeached because he resigned before. And Andrew Johnson was before you and I were alive, right? At least in my case, I wasn't alive, and you weren't either. So, Andrew Johnson did barely get through. He -- by one vote, he was not convicted. But you need two thirds to get convicted in the Senate. And there's clearly not two thirds to convict President Trump based on what we now know. So, it is a historic time. And when I lived through it before with Bill Clinton, I didn't think -- when I was an observer of it, I wasn't involved with it -- I didn't think I would live to see it again. It's a sad day in many respects because nobody really wants this to happen.

Bret Baier: You know, a lot of people outside of Washington look at Washington through a negative prism about how things operate here. You look at Washington differently as historic point. You've donated tens of millions of dollars to various efforts, the Kennedy Center, the monuments, and you've called it -- in your book, you wrote in the intro, "I called the effort to preserve historic documents and buildings, patriotic philanthropy. By that I mean philanthropy designed to educate Americans about their history and heritage, the good and the bad." Explain that and what brought you to that.

David Rubenstein: Well, I worked in the White House as a young man. And so, when you work in the White House, you get a sense of history. But as Washington -- as I lived here for 40 years, I realized that many of the monuments or memorials could use refurbishment, and the federal government wasn't putting up the money in some cases. And I wanted people to see some historic documents that maybe they weren't otherwise going to see, like the Magna Carta. So, I've put together various things, designed it, let people know more about American history.

Bret Baier: And they're really great interviews and the book is a tremendous read because you get these nuggets. I'm obviously, I have a soft spot for historians.

David Rubenstein: Well you're a historian.

Bret Baier: And then well I'm a reporter who covers history, but I do love reading how you interviewed these historians. What did you take from some of these conversations that surprised you that really kind of said this is something different?

David Rubenstein: Well, in any part of history, there's always some things you probably don't know. Many people got their history when textbooks when they were in the 7th grade, 8th grade, 9th grade they probably haven't gone back and read more about Lincoln or Washington or more modern presidents like FDR. And so I think when you go and read this book, you're going to learn a little bit more some of the humor as well I try to you know, I'll use a little humor and in some of the interviews. But these people who are doing these interviews, they have studied these people for 10 years and they know it cold and so to distill it in a few minutes is not easy but I think it's a way that people can learn a little bit of history and not have to read a gigantic textbook. Hopefully, as I say in the book, if you're really interested, go read the entire book. I'm just whetting your appetite. I'm providing an appetizer.

Bret Baier: I really do love the questions that you ask and one of them that you've asked repeatedly was of these people that you've interviewed and the subjects that they covered. Who would you want to have dinner with?

David Rubenstein: Well, let me turn the question on you. You just wrote a book on Tehran.

David Rubenstein: And there were three term people there. So, FDR, Stalin and Churchill. So, if you could have dinner with any one of them, who would you want have dinner with?

Bret Baier: Well, I think it had to be Churchill just for the humor of it all because of his emotions. But let me turn it on you of the ones in your book.

Bret Baier: You've got John Adams, Thomas Jefferson, Alexander Hamilton, Abraham Lincoln, Martin Luther King Junior, Lyndon Johnson there's others in here of those who would you have.

David Rubenstein: In my view, the greatest American president and maybe the greatest American of the all is Abraham Lincoln. He kept the country together. Many people would have said, south, if you want to go away, go away. I'm not going to go into civil war to keep the country together and I think he was a man of such brilliance, such literary skills and such humility that I think having dinner with him would be quite a treat.

Bret Baier: When you look at our country now and it's obviously very divided and then you look back at these conversations you've had with historians, what do you tell people at home? I mean, we're a resilient country we get through a lot of tough stuff. This is a split time in our country.

David Rubenstein: Yes. I talked to a senator this morning who talked to me about the two hundred or fiftieth anniversary of our country's founding, which was coming up in 2026. And you think about 250 years we've had our problems for sure. Nothing we're doing going through now is comparable to what went through the civil war. In the Civil War we lost about 3 percent of our population today. Today that'll be equivalent of 9 or 10 million people, so we had people killing each other who were fellow citizens. So that's not quite what we're going through. We have a political dispute in Washington. It's not pleasant. It's not pretty to look at. I wish it wasn't happening, but it's not the same as the civil war. So, it's not a situation I think it's impossible to get through and what I'm trying to do in my series, the library of Congress is getting members to talk to each other, get to know each other a little bit better. Obviously, it hasn't produced an era of good feelings yet, but hope springs eternal that eventually members of Congress will feel less animosity towards each other.

Bret Baier: But you would like to call for more patriotic philanthropists?

David Rubenstein: Yes, because I would like people to give back to the country. I think everybody can do a little bit more to make the country a little bit better and philanthropy isn't just giving your money. You know, philanthropy is a derivative, an ancient Greek word that means loving humanity. You can give your time, your energy and ideas and the most valuable thing we all have is our time. We can't get any more of our time. So, I encourage people to volunteer, be a docent in at the Smithsonian, volunteer at the Kennedy Center. Do other things you can do to give back to the country and I think my theory is that if you give back to our country, you'll live longer, you'll be happier and then eventually there'll be a special place in heaven for those people that do that. Now, I can't prove that, but why would you want to take a chance that I'm wrong?

Bret Baier: That's right and that's why you should get this book “The American Story.” It's really a great read. Conversations with master historians. David Rubenstein, you are welcome back. Anytime.

David Rubenstein: Thank you very much, Brett. Best wishes for the holidays, too.